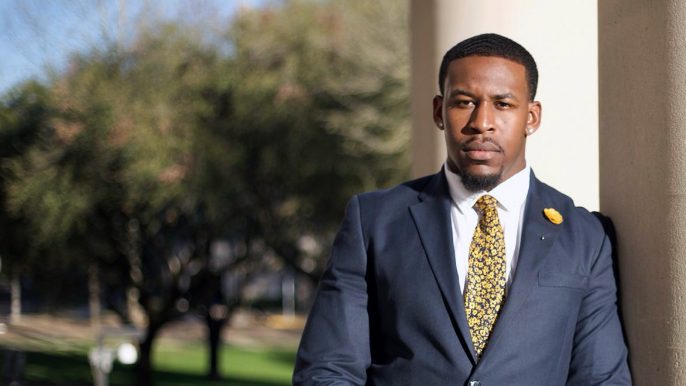 Increasing student activities and pumping up school spirit for Mississippi College sports teams are some of his priorities.

Working closely with the university’s new administration in 2018-2019 will be another goal for Anthony Jackson. MC’s newly elected Student Government Association president, he’s ready to deliver on his promises.

“It’s a great milestone for me,” Jackson said.

The John F. Kennedy High graduate should prove to be an asset to the MC family for the next twelve months as SGA president, supporters say.

“Anthony brings many valuable qualities to the table in regard to his new position,” says outgoing SGA President Annsley McRae of Tishomingo. “He has an insight to a demographic of the student body that we haven’t been able to tap into in an effective way.”

So do his many friends who support the Blue & Gold. “He’s always had presidential leadership qualities,” says MC student Joshua Thomas of McComb. “I think it’s cool that he’s the first African American SGA president” on the Clinton campus.

Other MC friends like Richard Ingram of Shreveport, La. and Mya Leslie of Benoit describe him as a people person who will go all out for students.

Today, there are about 1,446 Mound Bayou residents. Founded by former slaves in 1887 in the wilderness of Northwest Mississippi, Mound Bayou in Bolivar County is considered the oldest all-black municipality in the United States. The town was incorporated in 1898. In 1952, Mississippi Civil Rights leader Medgar Evers moved to Mound Bayou to sell insurance in the community. The town thrived for decades with its churches, schools, medical facilities and businesses, but its population dwindled in recent years. President Teddy Roosevelt once called it “the Jewel of the Delta.”

Making history is important, but Anthony Jackson wants to do much more after he’s sworn in on April 10. “I want to revitalize the atmosphere at school.”

Anthony honed his leadership skills with the Campus Activities Board. He’s taking on his new role as MC President Lee Royce retires in May after 16 years of service.

The Deltan can’t wait to meet the new president at Mississippi College once school officials make an announcement later this spring. “I’m looking forward to it.”