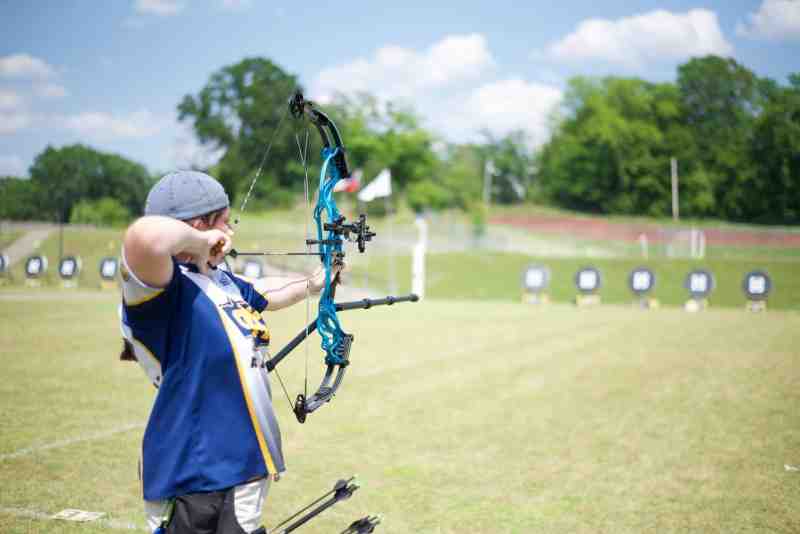 Hitting targets indoors or in the woods, archery competitors are growing in numbers across the USA. Nearly 19 million Americans, ages 18 and older, shot bows & arrows in one recent year.

The Olympic sport is alive and well for another season for the Mississippi College archery team. The talented MC squad will compete at the 3D National Collegiate Tournament in Foley, Alabama October 25-28.

“Each arrow has a chance to be better than the last one, and that’s what drives me,” Hootsell says. The 19-year-old MC sophomore from Natchez loves the sport. “It challenges me not only physically, but also mentally and emotionally. I am pushed to improve myself in those areas through shooting.”

Emily competed in high school through the Adams County 4-H shooting sports program and with the Mississippi Archery Shooters Association. She cherishes the opportunity to compete with the MC squad.

“I like the supportive and friendly atmosphere of the MC archery team,” says the biology/medical sciences major. “We are more than a team. We’re a family.”

Coached by Waldo Cleland, the MC squad competed at the 3D regional tournament in Hattiesburg two weekends ago and turned in solid performances. Their focus now is preparing for the national event in south Alabama.

Teammates are just as passionate as Emily Hootsell. “When it comes to archery, I love how it helps me in relieving stress,” says MC junior Alisa Promise, 20, of Monticello. “It also challenges me to get better with every shot.”

Before joining the MC archery team, the psychology major competed at Lawrence County High School. Alisa’s sharpened her skills with bows and arrows for six years.

Worldwide, archery is seeing considerable growth. At the World Archery Championships in Copenhagen, there were 623 top competitors from 96 nations. That’s up from 441 participants from 69 countries in 2013.

“Archery is as much of a mental challenge as it is physical,” says Becca, a psychology major from Baton Rouge, Louisiana. “You have to focus on what you are doing, and cannot let a bad shot discourage you. It challenges your mental fortitude, which ends up being beneficial in other aspects of life.”

A senior from New Haven, Illinois, Brandon Sauls serves as archery team captain this year for the Blue & Gold. Mississippians on the team include: Allison Freeman of Natchez, Morgan Hamilton and Jaci Wesson, both of Petal, Jimmy Herbert of Olive Branch, and Skylar Graves of Tylertown. Others are: Noah Parker of Moss Point, Maria Amaya and Jacey Wall, both of Hattiesburg, Jordan Seale of Decatur, John Stanford of Water Valley and Bailey White of Monticello.