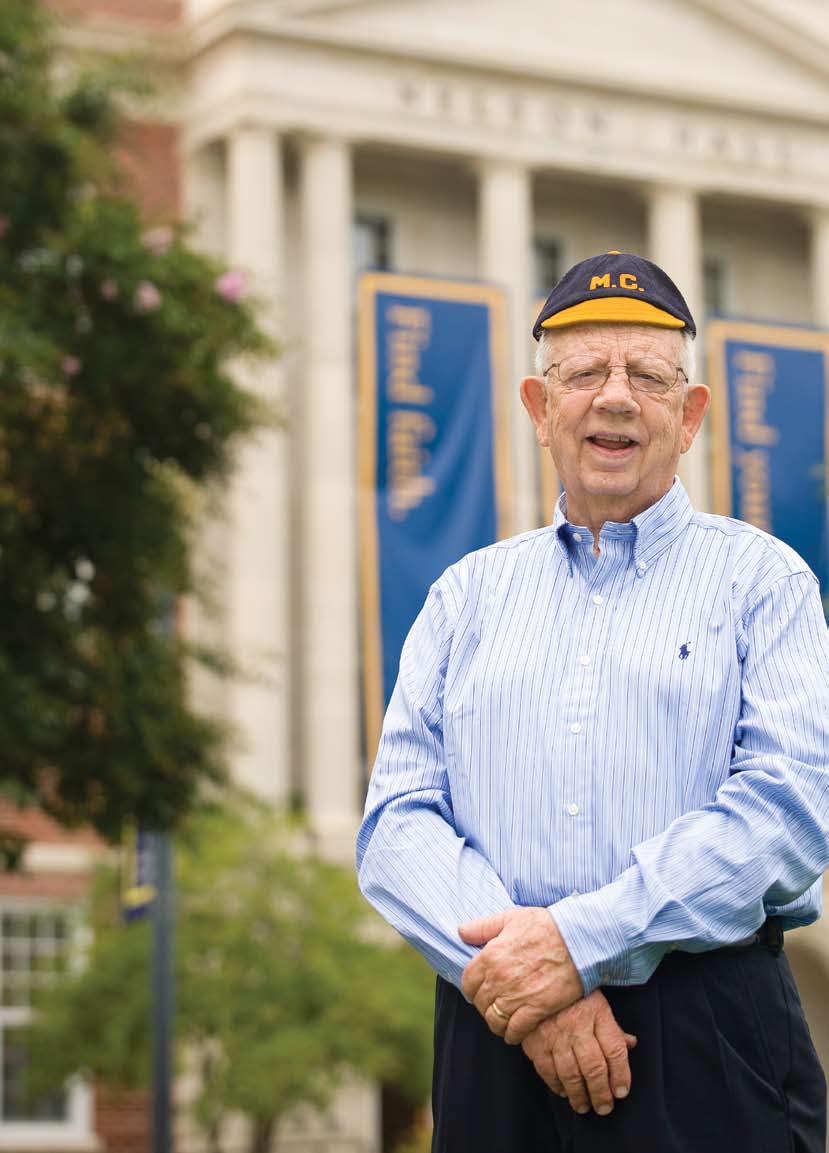 A luminary in the Mississippi College family as an educator, administrator and mentor, Edward McMillan died after a lengthy illness.

The MC Alumnus of the Year in 2008, Dr. McMillan earned his bachelor’s degree at the Baptist-affiliated school in 1950. The Edward McMillan University Archives at the Leland Speed Library on the Clinton campus is named in his honor. The room is packed with books, newspaper files, photographs, portraits and much more about his alma mater where he served for a quarter-century.

Members of the Mississippi College community expressed their deep admiration of the friendly Southern gentleman after learning of his death on May 25.

“Dr. Ed McMillan was an encourager,” said Wayne VanHorn, dean of the School of Christian Studies and the Arts.

McMillan prayed for VanHorn the first day he became dean at the 5,200-student Christian university. “I always benefited from his prayers and will never forget his kindness.”

A Clinton resident, McMillan joined the Mississippi College faculty in 1973 and faithfully served for 25 years. He’s a former dean of Graduate Studies and history professor. McMillan also served as executive secretary of the Mississippi Baptist Historical Commission from 1992 through 2012. The association preserves key historic documents from Baptist churches statewide.

McMillan did an extraordinary job as an MC administrator and was a friend to many, says Graduate School Dean Debbie Norris. “He was my predecessor and did so many powerful and meaningful things for the university – a true role model.”

She summed up his many achievements in a few words. “Dr. Mac meant so much to so many.”

The list of notable accomplishments for the popular Clintonian is quite lengthy. It includes McMillan being named recipient of the university’s prestigious Order of the Golden Arrow award. The remarkable  leader chaired the institution’s history and political science department. In 1990, he established the Mississippi College London Program. It allows MC students to study in London for 13 weeks to explore artistic and cultural activities in England, while broadening their view of the world.

Earning a master’s at the University of Mississippi, and a doctorate at Texas Tech, McMillan remained a faithful servant to God long after he retired. His heart always remained firmly connected to his alma mater, America’s second oldest Baptist college.

“At MC, I learned a sense of commitment, loyalty, diligence and how important it is to be dependable,” McMillan said in an interview a few years ago. “You do better in life if you are dependable and your friends know it.”

“He’s one of our legendary professors,” says Ron Howard, vice president for academic affairs. “Very few professors who taught at MC had a more profound impact.”

In a “Beacon” alumni magazine story a decade ago, President Lee Royce described Dr. McMillan as a “gifted professor, a successful administrator and a Christian leader who left an enduring legacy at Mississippi College.”

A Kosciusko native, McMillan met his wife, Carnette, at Mississippi College. They were married in 1951.

As a Baptist deacon, and member of the Lions Club International, Dr. McMillan’s service extended well beyond the Clinton campus.

“Dr. McMillan was a giant to me, and that had nothing to do with his physical stature,” said William Perkins, editor of “The Baptist Record,” the weekly newspaper of the Mississippi Baptist Convention. “On every project where we worked together, his Christianity shined as brightly as anyone I have ever known.”

Norris described McMillan as “a man of integrity and great insight.” He invited the MC educator to participate in the London Semester in 1998, and it remains one of her best experiences. The Edward L. McMillan Program of International Study is named in his honor at Mississippi College.