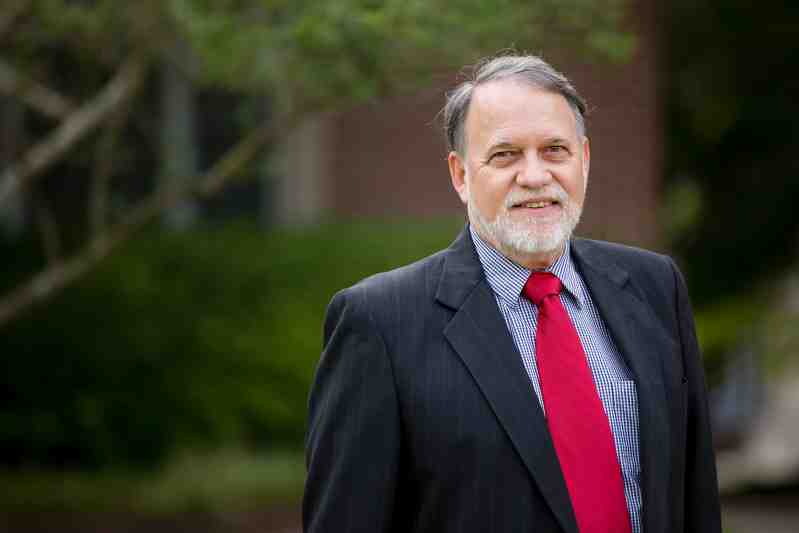 Students with “The Collegian” dedicated the Spring semester’s final issue to Tim Nicholas. It was how they expressed their admiration for Mississippi College’s retiring communication professor and newspaper advisor.

“I have enjoyed virtually every day of teaching here,” Nicholas said. “Students may not actually keep you young, but it feels that way. This upcoming generation is quite competent.”

From his passion for radio show classics of yesteryear to his love of teaching, Nicholas deserves high marks, colleagues say. “He has proven to be an excellent teacher, mentor and friend to students at MC the past 17 years,” says Communication Department chair Cliff Fortenberry.

The former editor of  “The Baptist Record,” Nicholas will pen a sequel to his first book, spend more time with his grandkids, and travel with his wife, Mary, in the future.

As a professor, Tim guided “Collegian” students to win numerous Southeastern Journalism Conference awards. After becoming “Collegian” editor, Joelle Youngblood noted Nicholas “began to pour even more journalistic wisdom and general life into me that I will carry through the end of my career.”

Dr. Nicholas, who originated the Purser Hewitt Lecture Series in the Communication Department, will take his life’s ambitions to new heights. Climbing Alpine mountains is on his to-do list. Other educators will soon depart Mississippi College’s front brick entrance to embark on new challenges.

A 1975 MC graduate, music professor Lewis Oswalt will hike and mountain bike near Moab, Utah soon after May’s graduation ceremonies. An avid cyclist, hiker and kayaker, he’s an expert on church music from centuries ago.

Oswalt’s collection of rare hymnals was featured in settings such as MC’s Leland Speed Library. Recently, he contributed to the “Canterbury Dictionary of Hymnology.” Oswalt is a former editor of the “Journal of the Southern Baptist Church Music Conference.”

Fans at Robinson-Hale Stadium heard Lewis shine as the public address announcer for MC Choctaws football for 21 seasons. He also served as the radio voice of Clinton High Arrows football from 2003-2017.

Joining the faculty in 1989, Dr. Oswalt directed the MC Madrigal Singers, Women’s Chorus and Men’s Glee. The MC Singers provided a wonderful sendoff to Lewis and his wife, Lisa, at an April reception in Provine Chapel. The Oswalts are Clintonians and their three children are MC grads.

MC nursing leaders, Henriques said, “made sure we were always careful to stress the importance of Christian caring and family.”

A math professor for 35 years, Charlotte McMath believes the strength of MC remains its people. “I work with some of the finest that could be found anywhere, and I will miss seeing them tremendously on a daily basis,” she said. Working with the MC family, she said, “certainly made my life richer.”

Her love for all things Blue & Gold began when Charlotte was an undergraduate more than 45 years ago. She and her husband, John, the MC golf coach, are enthusiastic supporters of Choctaws athletics.

Other retirees include communication professor Sandra Grayson of Yazoo City. She’s served as director of the hilarious “Best Christmas Pageant Ever” student production for a decade along with many one-act shows. She’s a former Northwest Rankin High teacher.

Leland Speed Library Director Kathleen Hutchison retires soon as well. The Mississippi University for Women graduate began working as a systems librarian in 2003 before becoming director in 2007. When the Crystal Springs resident was asked what she will miss, Kathleen said it will be “everything and everybody. The MC culture has been an important part of my life for the past 16 years.”

Others joining retirement ranks are professor Cecile Edwards after 37 years teaching at MC Law.  Also: Ann Long, who began her duties with the Registrar’s Office in 1987 and joined the admissions office in 2006. She closely worked with recently retired Stacie Jones, who launched her MC career in 1997. All ten retirees received well-deserved accolades from their colleagues.