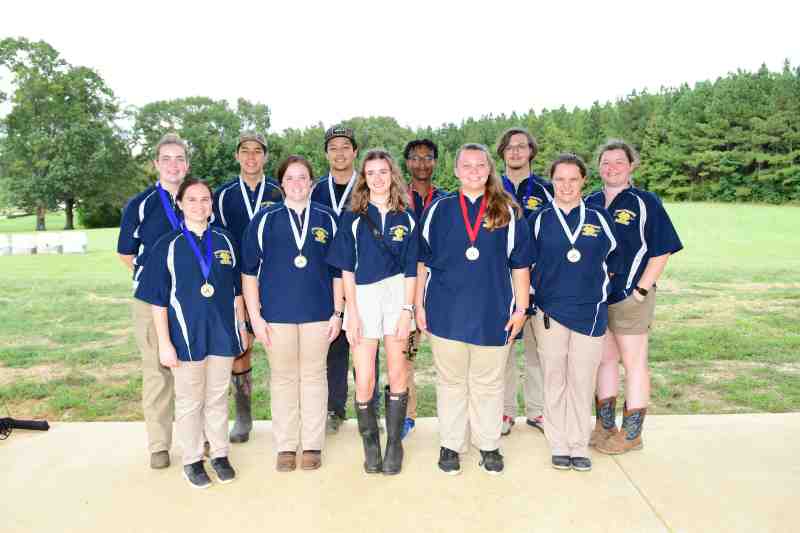 The Blue and Gold archers battles raindrops and misty weather throughout the day to post three first-place and three second-place individual finishes in the championship.

“Because the woods are so dense on our range in Traceway Park, it’s hard to see the marks on dark-colored targets,” McDonald said. “Brighter conditions and more open ranges make it easier to see what you’re aiming for.

“The National Tournament will go on, rain or shine, as long as there’s no lightning. The last few years, we’ve been lucky, but this helps us prepare, no matter the weather.”

Dr. Jim Turcotte, vice president for enrollment services and executive director of alumni affairs, said he was impressed by the archers’ performances.

“We shot well, taking first place in almost every event, and nearly every archer placed in the top of the state tournament,” Turcotte said. “We are going into the national tournament in a strong position and we expect to have one of the top archery programs, both team and individual, in the country.

“Coach John McDonald continues to recruit and train some of the best collegiate archers in the nation.”

“We practice daily the equivalent of shooting a tournament,” he said, “and the tournaments help us prepare for nationals. By shooting at different locations with archers other than just those on our team, we gain experience shooting in a tournament situation.”

McDonald said he expects his archers to be at or near the top of their game when they participate in the USA Archery Collegiate 3D National Tournament Thursday-Sunday, Oct. 14-17, in Foley, Alabama.

“I’m looking for some of our students to achieve personal bests at the upcoming tournament,” he said, “especially considering the team is so young this year.”