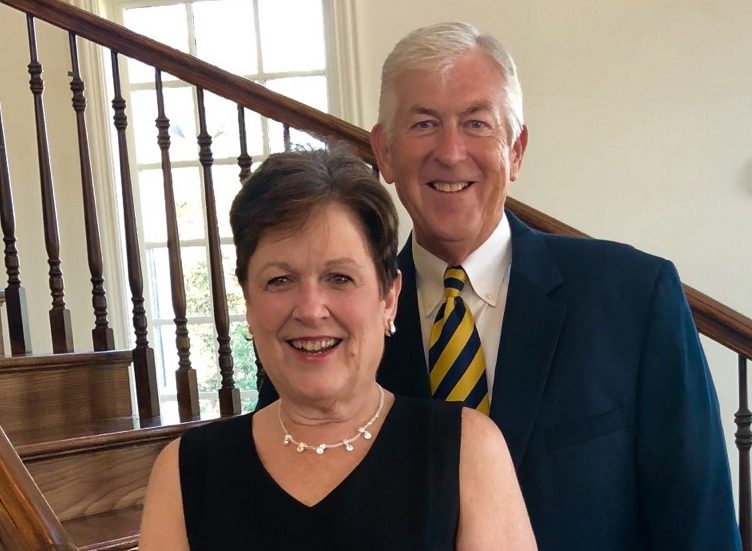 Brenda Holloway and husband, David, of Clinton. Brenda is a 40-year MC employee who is retiring this Spring.

Brenda Holloway encouraged Mississippi College students, served as a role model and dear friend to many on the Clinton campus.

After four decades of service as an MC staff member, the Clintonian is retiring this Spring. Her most notable accomplishments span the 23 years she served as the Baptist Student Union secretary.

BSU leaders want students to know Jesus Christ and be equipped to share His life changing story with people at Mississippi College and around the world.

Certainly, Brenda has done that and more for the BSU since joining its staff in 1997.

“The BSU has been tremendously blessed to have someone who is not only gifted administratively, but also has a deep faith and attentiveness to the needs of people,” says director Mandy Phillips. ”Her ministry through MC BSU has impacted the course of eternity for so many students.”

Holloway worked in tandem with directors and student lead teams to ensure everyone around her is more productive.

The work of the BSU is tied to student summer mission trips around the globe, plus winter retreats involving worship and Bible study. There are community service projects, student leadership conferences as well as events to have fun.

Earlier this year, the Baptist Student Union moved its offices below the university cafeteria to a residence next-door to Cups.

No matter where the BSU is located, Holloway cherished every minute at work. “It has been a joy to be part of the BSU ministry for 23 years,” she said. “Although we have differing memories over two decades, we share a love for our Lord that binds us all together.”

Those were Brenda’s words on a Facebook post following the BSU’s summer missions banquet at Anderson Hall in late February.

At MC, the Pontotoc native was among the sea of friendly faces greeting new freshmen arriving for Fall classes. Some were a little homesick as their college experiences began.

MC senior Jeremy Gore, 22, of Dallas, Texas fondly remembers Brenda Holloway as one of the first people he met when arriving as a freshman.

“She helped me, and countless other freshmen throughout the years, transition to college life,” Gore said Saturday as Easter neared. “Mrs. Brenda is a wonderful encourager, mentor and friend. She is always willing to lend an ear to students and give advice when needed.”

An MC accounting student, Gore returned home to Texas weeks ago to complete his studies online due to the COVID-19 outbreak. The former MC table tennis player is on track to receive his diploma in May. He plans to pursue a master’s in accountancy at the University of North Texas.

It was at the BSU, where Jeremy deepened his faith, made new friends and came to know its leaders.

“During my four years at MC, the BSU has become a home,” Jeremy said. “I enjoyed hanging out in the office every day and going to events like Vision on Monday nights.” The crawfish broil was special, too.

Brenda joined the Mississippi College staff as an admissions counselor and served from 1976-1982. The MC alumna worked in the Christian university’s Office of Continuing Education from 1982-1993.

While much of her service was considered part-time, Mandy Phillips begs to differ. “We would say her service has been more fulltime than anyone could imagine!”

Holloway is part of a dedicated team of hundreds of employees “making lengthy, meaningful contributions to MC,” Phillips added.

Brenda Holloway and her husband, David, are faithful Mississippi College Choctaws. A member of MC’s Class of 1976, Brenda Holloway and David love promoting their alma mater. Spending quality family time is a big priority, too. The Holloways are huge fans of their hometown of Clinton.