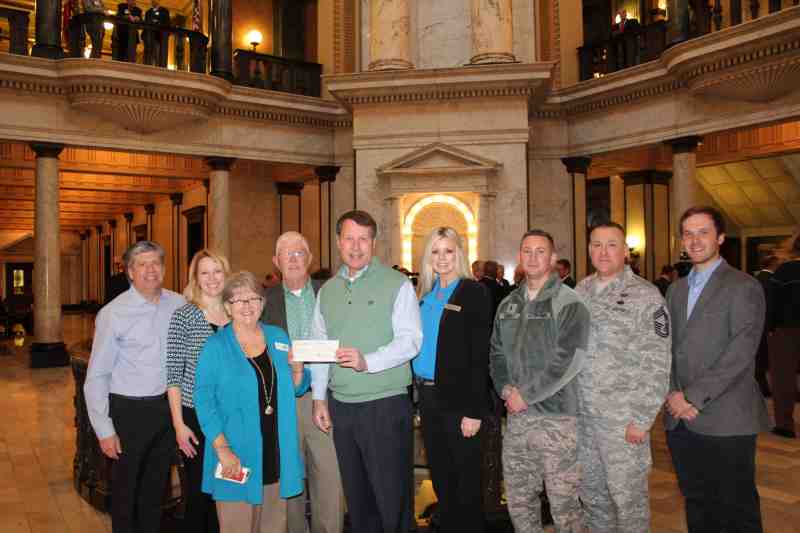 Camp Kamassa supporters, including Mary Kitchens, the project's chief advocate, gathered at the state Capitol on Feb. 21. The camp for special needs children and adults will be built in Copiah County on 326 acres of land 9 miles from Crystal Springs.

Camp Kamassa supporters showed up in droves at the Capitol to showcase the facility for Mississippi’s toughest kids.

From state lawmakers to corporate donors to military leaders, they spoke at a February 21 press conference how the facility will be a dream come true. It should take three years to build. Members of the military are supplying about $6 million worth of free labor to get the job done.

Construction of Camp Kamassa for kids with cancer, sickle cell and other serious health issues along with children in foster care will be served at the facility. So will adults with special needs.

The 2019 Mississippi Legislature seeks to supply more than $1 million to help the cause west of Crystal Springs. Corporate supporters like Sanderson Farms are pitching in. The Air Force Reserve Command, the Marines, along with the Mississippi Air and Army National Guard, will be among the military branches supplying the labor.

Mary Kitchens remains the strongest advocate and chief organizer for Camp Kamassa. There are reasons the cause has touched her heart. Her son, Dan, was a nine-year-old when in 1984 he first attended Camp Rainbow. It served as Mississippi’s first camp for children with cancer.

A Mississippi College graduate and an attorney, Dan Kitchens later became a counselor at Camp Rainbow every summer. His brothers, Matt and John, signed on as counselors.

Today, Mary’s three sons, all Mississippi College grads, remain strong supporters of Camp Kamassa. But they are getting plenty of help on the journey to get it built.

Camp Kamassa will be located on 326 acres of land nine miles from Crystal Springs. People from dozens of states, as far away as Alaska and Hawaii, helped donate money to help build the camp.

At the press conference, Mary Kitchens thanked major supporters she encounters year-round. They include Air Force Reservists from around the USA gaining skills while they build the special needs camp in Copiah County.

Gov. Phil Bryant says the Air Force did remarkable work clearing the land. The program bringing more than 200 military people to the Central Mississippi community is a major economic development investment, he said.

It will take plumbers, electricians, and people with other job skills to get the camp open.

Eventually, there will be a swimming pool, a lake, horses, archery ranges, cabins, a cafeteria and much more.

“Mrs. Mary” is a driving force that won’t quit at Camp Kamassa. The same is true for director of development Tanya Mohawk. Fund raising for the camp never stops. Both Mississippians are excited about what the future holds for the spacious facility.

Mississippi House Ways & Means Chair Jeff Smith of Columbus said Camp Kamassa will be completed due to solid teamwork. “It is a wonderful combination of the private sector and government.”

Based in South Carolina, Air Force Chief Master Sgt. Stacy Gilman says there’s no place he would rather be than Camp Kamassa. “There is no finer project.”

When factoring in $6 million in free labor, Mary Kitchens says Camp Kamassa will be a $17 million project reaping long-term benefits for special needs children and adults. Organizers will have more to say about the military’s construction efforts at a special event February 28 at the rural Mississippi camp.