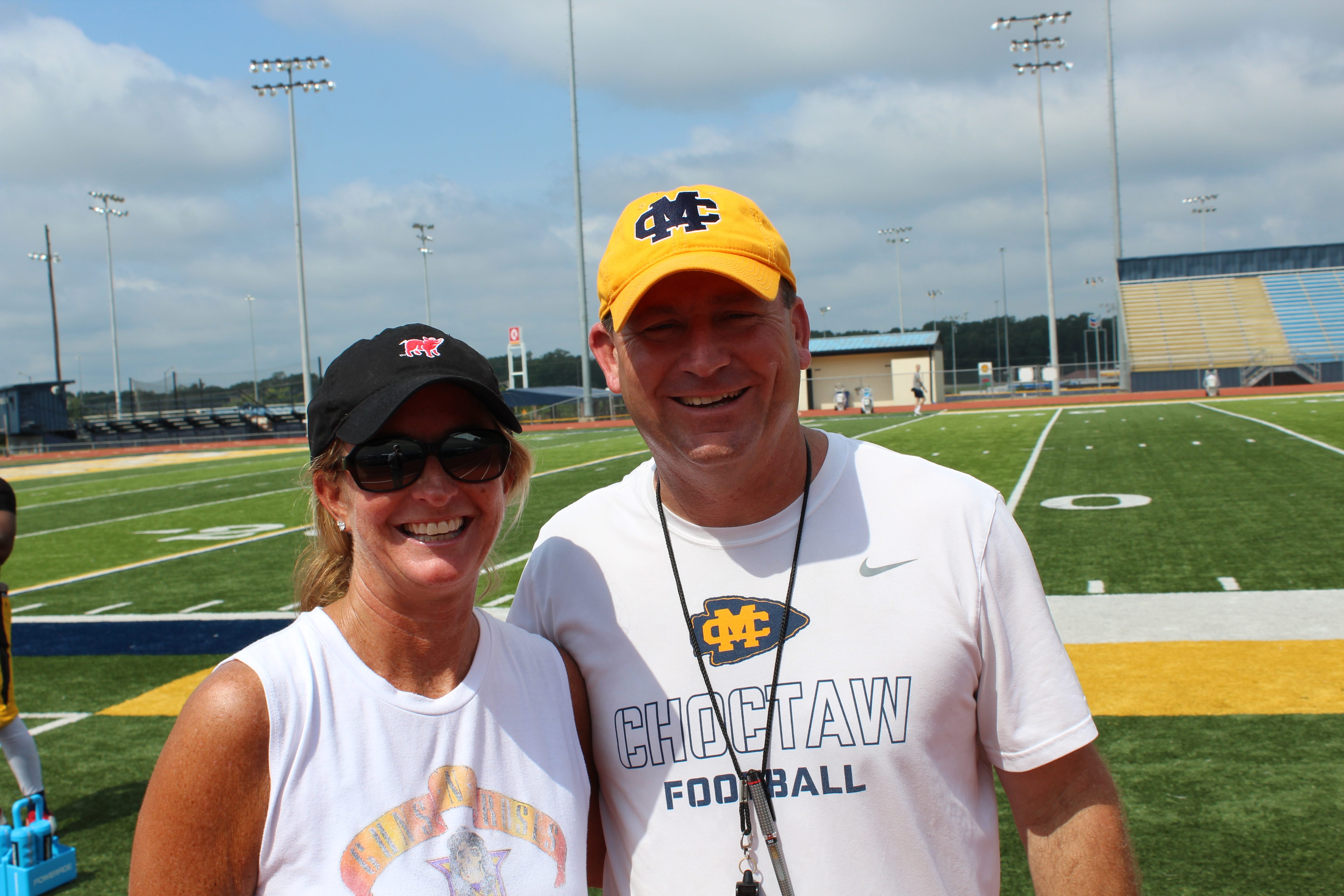 Shooting photos at Mississippi College football practices and shouting words of encouragement to players, Candis Bland cherishes her role on the sidelines.

Her scores of photos on her cell phone quickly go to MC parents and grandparents across the nation. Players enjoy seeing the pictures, too, during this rain-drenched August in Central Mississippi. Some student-athletes prefer funny poses, while others like to see Choctaws game action.

Rain or shine, Candis Bland shows up at every football practice on the Clinton campus and all ten regular season games. The wife of head football coach John Bland, the Clinton resident is pumped to see the Choctaws 2017 season begin. MC travels to Georgia to face Clark Atlanta in game one on August 31.

“It doesn’t get old. I count down the days until football starts,” Candis Bland says. “They (the players) are our family.”

Many Choctaws players from across the Southeast and other parts of the USA consider Candis Bland to be the team mom. It’s a title that perfectly fits the former Arkansas high school cheerleader and hoops player. “I’m old enough to be their mom. I take on that role comfortably.”

Candis snaps up to 60 pictures on her cell phone during practices amid sunny skies at Robinson-Hale Stadium. On rainy days, it can be as few as a handful of photos. She swiftly gets the pics in the hands of MC families. “These are just parents and loved ones who want to get a glimpse of what the players are doing.”

Technology has rapidly changed. Years ago, Candis would shoot pictures on a traditional camera, get the photos printed and hand delivered to college football players to decorate their dorm rooms. It’s a much speedier and easier process now with her iPhone.

Her role with the MC Choctaws football family isn’t limited to picture-taking. Sometimes, Candis will accompany players to church services on Sundays. She will keep parents in the stands informed by phone if a player is hurt. She’s a morale booster for players from the scorching days of summer through the cold weather of games in November. “I’m here if you need me,” is her message to players. Many of the MC freshmen are away from home for the first time.

Candis stays in touch with former players on social media, whether they’re in Florida, Georgia, Kentucky, Tennessee, Mississippi or other states.

“It’s a good job. I’m out encouraging the guys and like doing the pictures,” Bland says. She knows all the players on a first-name basis, whether it is senior punter Matthew Turcotte of Philadelphia or a new freshman suiting up for the Blue & Gold.

“She’s so consistent with being out here and supporting us during practices and on game day,” Turcotte says. “She’s very intentional about getting to know the players and building relationships.”

A former University of Arkansas quarterback, Coach John Bland and Candis have been married 25 years. They are the parents of three children. Their oldest daughter, Shreve Bland, will be an MC cheerleader this fall and study kinesiology. Their youngest daughter, Jade, is a Clinton High junior. Their son, Bo, is a student at Clinton Junior High.

Since her kids have grown up, Candis can devote more time to being a football coach’s wife.

Beginning his 4th year at MC, Coach Bland enjoys seeing his wife help on the sidelines. He believes her role with the MC football family is a plus. “It helps us win. One of the biggest things to contribute to success is team morale,” he said. “School is tough. She lifts the morale up.”

Her volunteer work stepped up when Bland was named head coach at Cumberlands in Kentucky. The team finished the 2013 season with a 13-1 record and made a trip to the NAIA championship game. In 2014, John Bland led the Mississippi College team as the Baptist-affiliated university transitioned to NCAA Division II and rejoined the Gulf South Conference.

MC finished last season with a 3-7 record. Highlights included shutting out GSC member Shorter and a heart-breaking one-point loss to heavily favored Valdosta State. Candis doesn’t just cheer for the Choctaws. She roots for her alma mater, the Arkansas Razorbacks, and the Dak Prescott-led Dallas Cowboys. Ever since her dad served as a high school coach in Arkansas, Candis has remained a huge football fan.