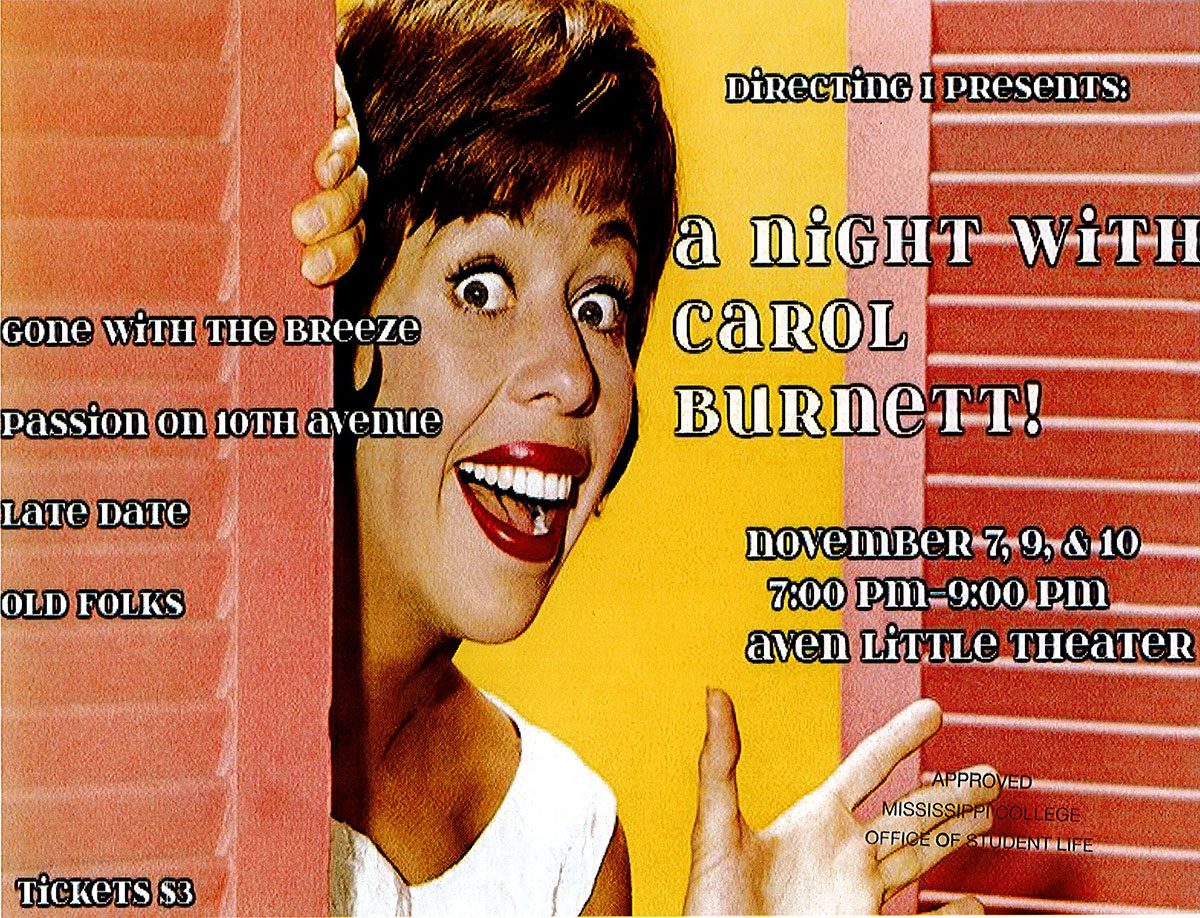 Carol Burnett remains an American icon in the entertainment industry. The talented Texan is blessed with skills to perform hilarious comedy skits, belt out tunes at the top of her lungs or get serious as an actress on stage. Carol is a wonderful writer, too.

“The Carol Burnett Show” became a must-see program for tens of millions of her TV fans every week from 1967 through 1978. First airing on CBS, the award-winning comedy show helped the San Antonio, Texas native become a superstar in living rooms in all 50 states.

Her many Magnolia State admirers are invited to Mississippi College for “A Night with Carol Burnett.” The Fall Scenes productions are booked for the Aven Little Theater on the Clinton campus November 7, 9 and 10.

Tickets cost $3, and the public is invited.  All of the scenes are linked to Carol Burnett’s life and comedic routines. The show starts at 7 p.m. all three November evenings.

The Aven Little Theater is always a cozy venue for scores of patrons to see Mississippi College productions up close. Students in the MC Communication Department’s play acting class will serve as the show’s four directors.

Fans of Carol Burnett will get a glimpse of what made the former UCLA student such an amazing success story in show business. Born in 1933 in the Lone Star State, Burnett first gained fame on New York City’s Broadway in 1959 as the star of the hit production “Once Upon a Mattress.” Following her TV triumphs, Burnett appeared in several feature films.

Fans in Central Mississippi can learn much more about Carol Burnett by reading her 1986 autobiography “One More Time: A Memoir.”

Titles of the one-act scenes during the evening include “Passion on 10th Avenue” directed by Mississippi College student Anisa Trevino of Gulfport. MC students in the cast are: Emily Katherine Dacus and Ian Campbell, both of Clinton, Madison Young of Tupelo and Brooke Haynes of Olive Branch.

“Gone with the Breeze” is directed by student Kendyll Covington of Pelham, Alabama. The MC student cast includes: Logan Martin of Olive Branch who plays the role of Scarlett O’Fever. Matthew Bell of New Albany is cast as Uncle Ben, while Trey Palmer of Metairie, Louisiana plays  “Rat” Butler. Other one-act scenes are titled “The Old Folks” directed by Tamia Craft of Brandon, and “Late Date” directed by Cece Russell of Jackson.

For more information, contact the Communication Department’s Vicki Williams at 601-925-3229 or vwilliam@mc.edu.