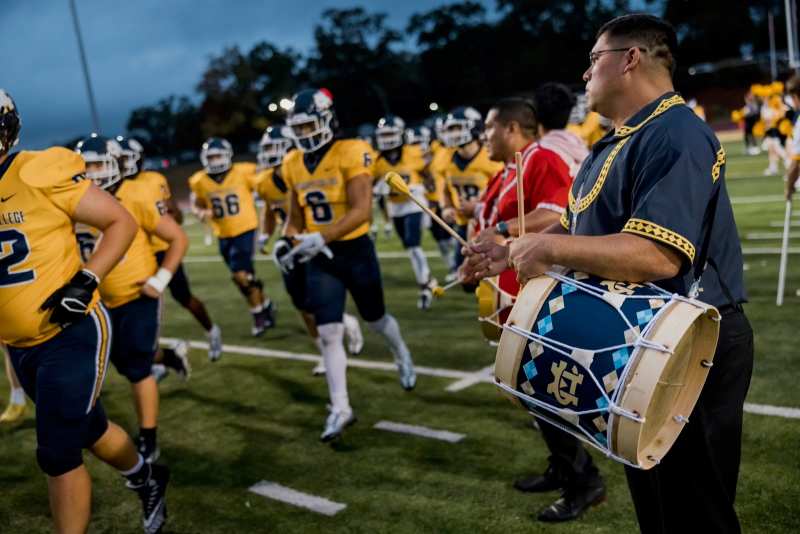 Throughout November, Mississippi College is recognizing Native American Heritage Month, a national observation of the diverse cultures, traditions, and history of Native American people, by celebrating the contributions and achievements of the Mississippi Band of Choctaw Indians.

According to H.J. Res. 577, “American Indians were the original inhabitants of the lands that now constitute the United States of America. Native American Indians have made an essential and unique contribution to our Nation” and “to the world.”

The joint resolution stated that “the President is authorized and requested to issue a proclamation calling upon Federal, State, and local governments, interested groups and organizations, and the people of the United States to observe the month with appropriate programs, ceremonies, and activities.”

The agreement established an expanded cultural exchange between Mississippi College – whose faculty, staff, and students are proudly referred to as “Choctaws” – and MBCI. In 2019, Tribal Chief Ben, an MC alum and 2022 recipient of the University’s Order of the Golden Arrow, was the fifth – and youngest – democratically elected Chief of the Tribe.

In accordance with the renewed MC-MBCI relationship and to celebrate Native American Heritage Month, here are some facts about the rich legacy of the Mississippi Choctaw:

* The Choctaw Indian Fair, one of the most popular tribal events in the Southeast, is the MBCI’s largest cultural celebration and brings in visitors from around the world. It originated from a traditional celebration called the Green Corn Festival that occurred whenever the harvest was ready. The first modern fair took place in 1949 – four years after the Tribe was federally recognized. The four-day event showcases Choctaw culture, such as arts, crafts, dance, music, clothing, food, and stickball.

* Each year, a remarkable young woman is inducted into an elite and exclusive circle with the honor and responsibility of representing her Tribe as the Choctaw Indian Princess. When the princess is crowned, she becomes not only the ambassador for the Tribe, but also the person little Choctaw girls want to be when they grow up. The first official princess, Patsy Sam Buffington, was selected in 1955 at age 12.

* Stickball has been a part of Choctaw life for hundreds of years and is a symbol of Tribal identity. When disputes arose between Choctaw people living in different communities, stickball provided a peaceful outlet to settle the issues. Players use handcrafted sticks, called kabotcha, to advance a woven leather ball, called towa, down the field to the opposing team’s goalpost, a 14-foot-tall, 4-by-4 post. Points are scored whenever an opposing player hits the goalpost with the ball.

* For centuries, Choctaw basket makers have created works of art from the swamp cane that flourishes along Mississippi creek banks. Historically, baskets were used to gather items in the fields and in the home. Choctaw basket makers weave together colored and natural strips of cane into traditional patterns, such as a diamond design. Many basket makers like to experiment with color, patterns, and shapes. In the Choctaw language, basketry is called taposhshik imma.

* Choctaw men and women alike often wear decorative hand-made beadwork with their traditional clothing. A beadwork set for women often consists of a belt, medallion, collar necklaces, earrings, ribbon lapel pins, a handkerchief lapel pin, and a round comb made from silver or another metal. Men wear collar necklaces, hatbands, and beaded belts. Both may wear sashes, considered the most traditional accessory that features both beadwork and hand-custom applique.

* Food and cooking are central parts of many Choctaw gatherings. Families and friends gather around the table to celebrate special occasions and enjoy homegrown vegetables, fried chicken, boiled pork, biscuits, and homemade desserts. Two dishes, in particular, hominy – which comes from yellow or white maize – and banaha – made by mixing cooked field peals with cornmeal – are favorites of the Choctaw people. In the Choctaw language, food and cooking are called illipa hicha hoponi.

* The colorful dresses worn by today’s Choctaw women are made by hand and most likely adapted from a 19th-century design. A woman’s traditional outfit includes a white apron trimmed in the color of her dress. Choctaw clothing, or illifokka, is usually trimmed with one of three motifs: full diamond and half diamond – said to represent the eastern diamondback rattlesnake – and/or a series of circles and crosses that may represent stickball and stickball sticks.

* Choctaw dance, or hilha, is intended to encourage participation rather than competition. There are three kinds of Choctaw dances: war, social, and animal. Choctaw war dances are different from other tribes’ in that women join men in dancing. Social dances mark important aspects of life, such as friendship, courtship, and marriage. Animal dances often mimic the behavior of the animals being portrayed.

* The Choctaw language, annopa, is essential to Tribal culture, tradition, and identity. The language links modern Choctaws to their ancestors, offering a common vocabulary and way of viewing the world. It awakens a desire in younger generations of the Tribe to persevere. The Choctaw language was first written in the early 19th century with a version of the Latin alphabet developed by Cyrus Byington, who spent 50 years translating the Bible into Choctaw.

* One of the oldest traditional instruments, the Choctaw drum, or alhipa chito, is modeled after a military snare drums. The design has changed very little in the last 200 years. The wood used to create the body of the drum is usually sourwood, black gum, or tupelo gum. These trees are often hollow by the time they reach a suitable size for drums. Today, the drum is primarily used at stickball games, but it may also announce a time for the Choctaw people to assemble for dances or weddings.