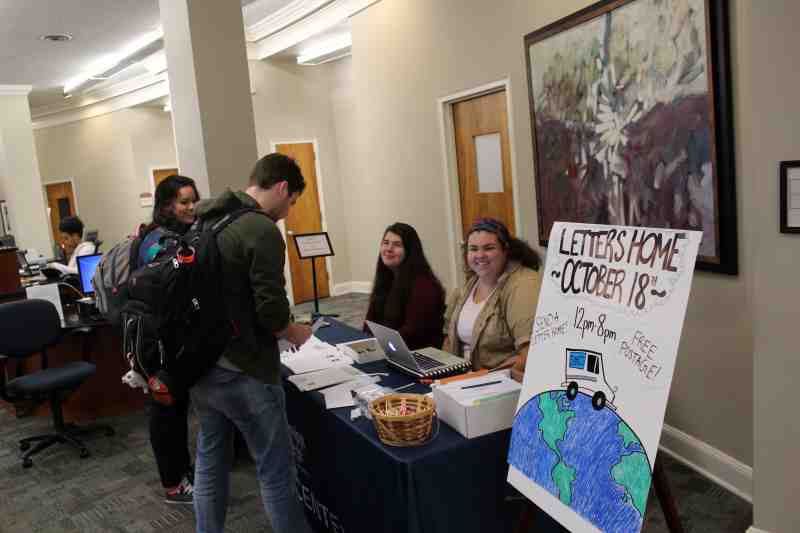 Mississippi College students Dakota Trammell of Cullman, Alabama and Isabella Capalbo of Ocean Springs staffed an MC Writing Center table at the Leland Speed Library. On October 18, they encouraged classmates as well as MC faculty and staff to write letters, part of a national celebration.

Steve Price and Lingshan Song penned letters to loved ones thousands of miles from home.

Call it the right thing to do for the two Mississippi College educators as America celebrated the National Day on Writing.

The National Council of Teachers of English sponsored activities in all 50 states. And the Magnolia State did its part.

The letters will reach family members, friends or really anybody who loves to get mail (besides bills or advertisements).

By Thursday night, MC students and employees crafted 150 letters. Their words in envelopes went to 23 states and 12 countries (including China, South Korea, France, Romania and Lithuania). The MC Office of Academic Affairs supplied the postage.

Song and her husband, Aaron, teamed up to write letters to their parents and in-laws. “We told them we love them and miss them,” Song said. She also mailed a letter to her best friend in China.

“After I came to the United States, we’ve been writing letters to each other,” says Song, a native of China. “This old-fashioned way of communication has kept our friendship warm and enduring despite the long distance over the years.”

Price, an English professor, wrote letters to his parents in Wisconsin as well as his nieces.

MC Writing Center students set up a table in the Leland Speed Library lobby area from noon until 8 p.m. Thursday.

MC Writes is a theme the Writing Center staff promotes on the Clinton campus. “The Letters Home event illustrates that,” Price said.

Isabella penned a letter to her grandparents in Rhode Island.

University news coordinator Andy Kanengiser dashed off a letter to his daughter, Hannah, 21, a Mississippi College graduate who lives in Fort Worth, Texas. “No doubt, Hannah will be happy to get a piece of mail from her Dad. I just hope she can read my hand writing. My penmanship has issues.”

As a boy in summer camp in rural Pennsylvania, Kanengiser frequently wrote letters to his parents in New Jersey. Writing letters home was an activity required of young campers back in the early 1960s.

But with social media, cell phones and other speedy communication, letter writing has become a lost art across the globe.

Organizers say the special day encourages Americans to realize writing is an important part of life in the 21st Century. Now in its 10th year, the National Day on Writing continues to grow across the USA.