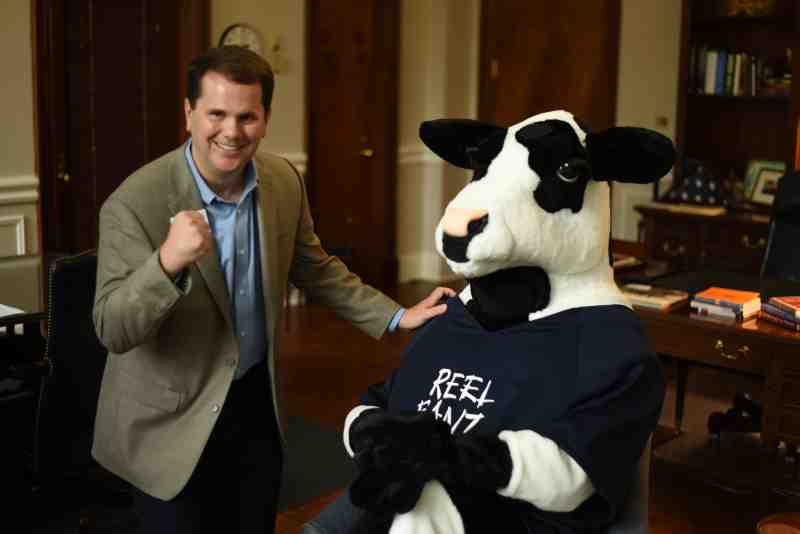 Dr. Blake Thompson had fun announcing the news with the Chick-fil-A mascot.

Chick-fil-A customers cover just about every square inch of the Mississippi College campus in Clinton.

So President Blake Thompson’s announcement of a Chick-fil-A coming to MC was greeted by a nice round of applause at the Christian university’s Faculty/Staff Convocation.

It was the “the big reveal” that Dr. Thompson served up at an August 23 luncheon attracting hundreds of faculty and staff members as well as student leaders.

The funny photos on a huge screen at Anderson Hall captured Dr. Thompson meeting with the Chick-fil-A mascot in his Nelson Hall office. The photos were a hit with the crowd.

The Rienzi, Mississippi native is pictured with a “cow” mascot wearing a T-shirt with the message: “Reel Fanz Eat Chikin.” There may be some spelling mistakes, but the message from the popular restaurant chain is clear.

The new Chick-fil-A would be located in the basement of a revamped Alumni Hall. The area contains about 20,000 square feet of space, and only about half of it is being utilized.

The terrific “breaking news” from President Thompson is something that chicken sandwich lovers want to hear as Mississippi College begins its 194th academic year.

He speaks from the perspective of someone who experienced “the culture of a company committed to putting people first and showing them love – no matter where they are from or what they believe.”

It’s a perfect fit for MC, he said, because it is a university that “loves its students no matter where they are from or who they are. They are a service oriented school that strives for excellence in all they do,” he said.

McConnell can’t wait for the day until Chick-fil-A opens its doors on the Clinton campus in Alumni Hall. The expanded Commons area figures to become a popular gathering spot for hungry people.

“I’m really excited to be able to grab a sandwich on the way to class,” McConnell said.

It will be a place where faculty, staff and students can enjoy a good meal and share fellowship time.

During his Convocation speech, Dr. Thompson spoke of his love of barbecue restaurants and his deep affection for Chick-fil-A’s menu. Its hospitality and friendly service always rates high with customers across Mississippi and in 47 other states nationwide.

Since opening in an Atlanta mall in 1967, Chick fil-A has been known as the home of the original chicken sandwich with two pickles on a toasted butter bun. Its chicken nuggets, chicken biscuits, salads, waffle fries, smokehouse BBQ bacon sandwiches are all pleasing to customers. The closest one to MC would be the always-busy Clinton location at 952 U.S. 80 East, near Walmart.

Chick-fil-A operators work well with their local communities. The restaurants remain closed on Sundays to allow employees to attend church or spend more quality time with their families. Employees get the opportunity to earn $25,000 True Inspiration college scholarships. There are many MC students who have worked at Chick-fil-A restaurants over the years.

Led by the Cathy family, the company is the third largest restaurant chain in the USA with more than 2,300 locations nationwide.

Founder S. Truett Cathy, the chain’s founder, made business choices based on his Christian beliefs. He openly incorporated Christianity into his restaurants featuring chicken sandwiches.

Thrilled to make the announcement at America’s second oldest Baptist college, Thompson said the new Chick-fil-A will anchor the additional space in the revitalized Alumni Hall. “It will fit our culture perfectly.”

At the same time during his remarks at Anderson Hall on Friday, Thompson announced new efforts to strengthen student-recruiting efforts across the South and other parts of the USA. It will be a major priority as he begins his 2nd year as MC’s leader.

Having a Chick-fil-A on the Clinton campus can only help those efforts by Mississippi College to celebrate its Christian mission. “Sharing meals is a way to show our love to people,” Dr. Thompson said. “We love our students.”