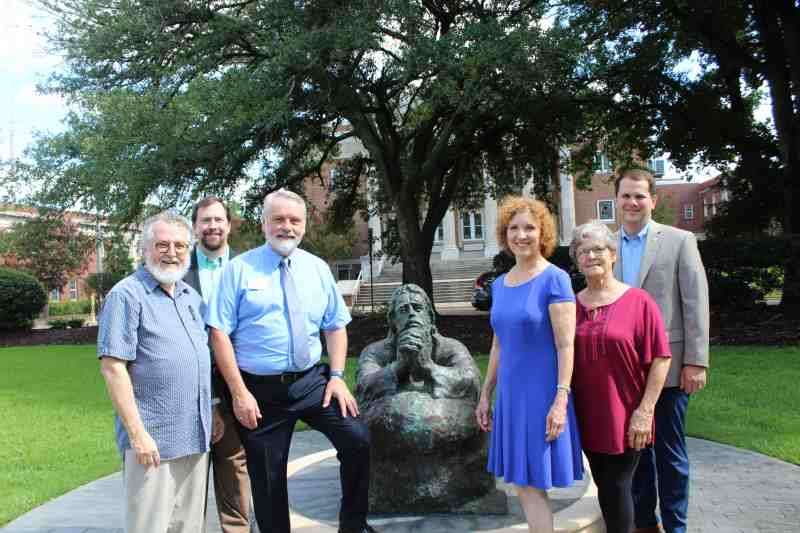 A $1,000 gift from the Clinton Arts Council helps support the late Sam Gore's Christ in Gethsemane sculpture. Unveiled in late March, the sculpture was completed about a month prior to Dr. Gore's passing in April. Clinton Arts Council President Bob Blanton, art professor Ray Gregory and Art Department Chair Randy Miley are pictured July 12 at the sculpture in the Rhoda Royce Prayer Garden. Gore family members: Dr. Judy Gore Gearhart and Joedda Gore, both of Clinton. They are joined by MC President Blake Thompson. Fund raising efforts continue at MC, where Dr. Gore served as the Founding Father of the Christian university's Art Department in the 1950s.

The Christ in Gethsemane sculpture illustrates Jesus praying in the garden prior to his betrayal, arrest and crucifixion on the cross.

Located at the Rhoda Royce Prayer Garden at Mississippi College, the splendid bronze sculpture crafted by the late Samuel Marshall Gore remained his last piece of art before his passing in April.

On July 12, leaders of the Arts Council of Clinton made a generous donation of $1,000 to help complete the project with the addition of three disciples. Council President Bob Blanton joined members of the Gore family to present the gift to the Christian university.

President Blake Thompson, Vice President for Advancement Bill Townsend and Art Department faculty expressed their thanks for the contribution. So did members of the Gore family. Fund raising efforts for the Christ in Gethsemane sculpture will continue this summer and into the Fall.

An internationally celebrated artist and painter, Gore, 91, served as the Founding Father of the MC Art Department in the 1950s. The 1952 MC graduate taught at his alma mater for more than six decades. The beloved educator was a mentor, teacher and inspiration to generations of successful artists nationwide.

The extraordinary Christian artist was cherished in his Clinton community and in art circles around the world.

Dr. Gore actively promoted his craft as a board member, longtime supporter, advisor and friend of the Arts Council of Clinton, Blanton noted. “He touched the lives of many of our members. When he passed away, the board determined to memorialize the profound impact on our organization and community.”

It took a year for Sam Gore to complete the Christ in Gethsemane project. He joined family members and a sea of friends at the sculpture’s unveiling at the Rhoda Royce Prayer Garden in late March. Sam completed work on two of the disciples. He was half-way finished with the third before his death on April 24 due to cardiac arrest at a Jackson hospital.

Sam Gore spent his life mentoring students including Mississippi watercolorist Wyatt Waters of Clinton. The Clintonian left a legacy of compelling Christian sculptures – from “Jesus & the Children” near the Mississippi College School of Education to “The Servant Savior” close by Provine Chapel.

His magnificent bronze sculptures depicting “Moses, Deliverer of the Law” in 2007 and its 2009 companion piece “Christ, Fulfillment of the Law” are destination points for visitors at the MC Law School in Jackson. The Clinton Visitor Center features a Gore sculpture paying tribute to America’s military.

“We will never forget the contribution that he and his family have made and continue to make to the promotion of the arts in the Clinton community,” Blanton said.

Dr. Judy Gore, the artist’s daughter and Joedda Gore, her sister-in-law, both expressed their appreciation to the Arts Council of Clinton. The Clinton residents were on hand for Friday’s gift presentation.

After his death, President Thompson noted how so many people deeply admired the Mississippian who meant so much to Mississippi College and the art world beyond. “No one in the modern era has served Mississippi College as faithfully and with as much impact as Sam Gore,” Thompson said. “His life was simply a masterpiece.”

The dramatic final piece Gore crafted was a significant part of the Inauguration Week for Dr. Thompson as MC’s 20th president. The addition to the peaceful prayer garden of flowers and fountains, he said, speaks to the “essence of our Christian university.”

Family and former MC students are in the process of completing the three disciples. “Donations will help make it possible to cast these (disciples) in bronze and complement the Christ sculpture,” said Dr. Judy Gore.

The funding comes when Gore Gallery director Randy Jolly is preparing to host an art show featuring the works of Sam Gore and retired MC art professor Kenneth Quinn. He was one of the legendary artist’s first students at Mississippi College. The art exhibition is expected to open this summer and be showcased through the university’s 2019 Homecoming in October.

For more information about making donations to the Christ in Gethsemane Sculpture Fund in memory of Dr. Sam Gore, contact Amy Rowan at the MC Advancement Office. She can be reached at 601-925-3257 or Rowan@mc.edu