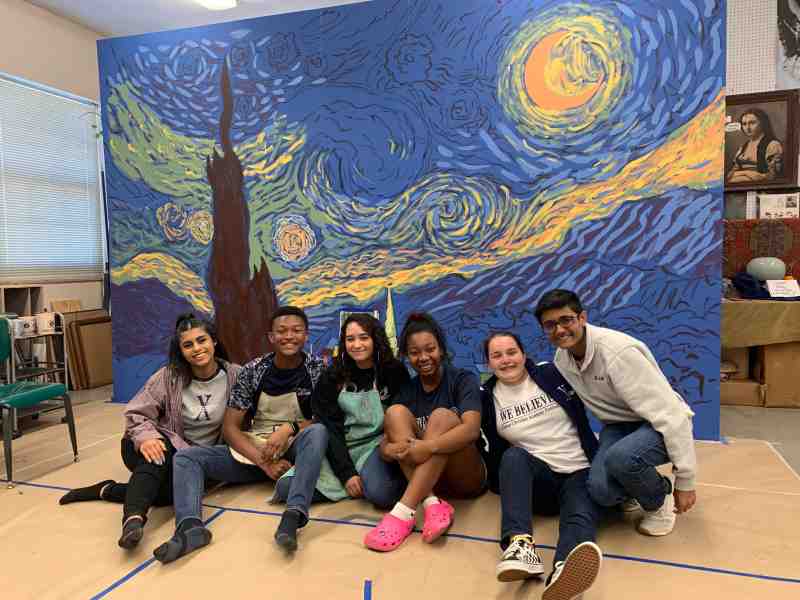 “Starry Night” is the name of the classic piece of work that Vincent van Gogh painted on canvas. The original occupies a prominent place at the Museum of Modern Art in New York City.

Crafted in 1889, it was created a year before the gifted Dutch post-impressionist artist died. “Starry Night” depicts his view outside his asylum room window at night. Van Gogh painted the art classic from memory during daylight hours.

With his assistance, the students painted a nine-foot by 14-foot painting on canvas in the manner of the van Gogh original. The artwork serves as a theme backdrop for the CCA’s Spring prom.

“It was appreciated by all who saw it,” the MC art professor said.

The junior class at Clinton Christian Academy raised the money for the cost of the supplies and to rent Duling Hall for the 2019 prom.

Born in the Netherlands in 1853, Van Gogh spent time at the asylum located at Saint-Remy. Vincent Willem van Gogh is considered among the most famous and influential painters in the history of Western art. In just over a decade, he created some 2,100 art pieces, including about 860 oil paintings, mostly during the last two years of his life. The Dutch painter died in France on July 29, 1890 at age 37.

Will any of these talented Clinton Christian Academy students achieve the acclaim of celebrated artists? It’s too soon to tell.

Smathers thoroughly enjoyed the experience working with the CCA teens as he does teaching Mississippi College art students every year on the Clinton campus.

The Mississippian joined MC’s Department of Art as an instructor in 1993. The MC graduate’s scenic landscape paintings of scenes from Haiti to Maine were featured in a Jackson exhibition in 2014.

Albert Smathers began painting scenes of the Lower Mississippi Valley after his MC graduation in 1979. It took him to spots ranging from Greenville, Mississippi to Grand Isle, Louisiana. He’s completed dozens of major murals, including one featured on the exterior wall of a Clinton business that’s visible to motorists. Smathers is the founder of the Mississippi River School of Art.