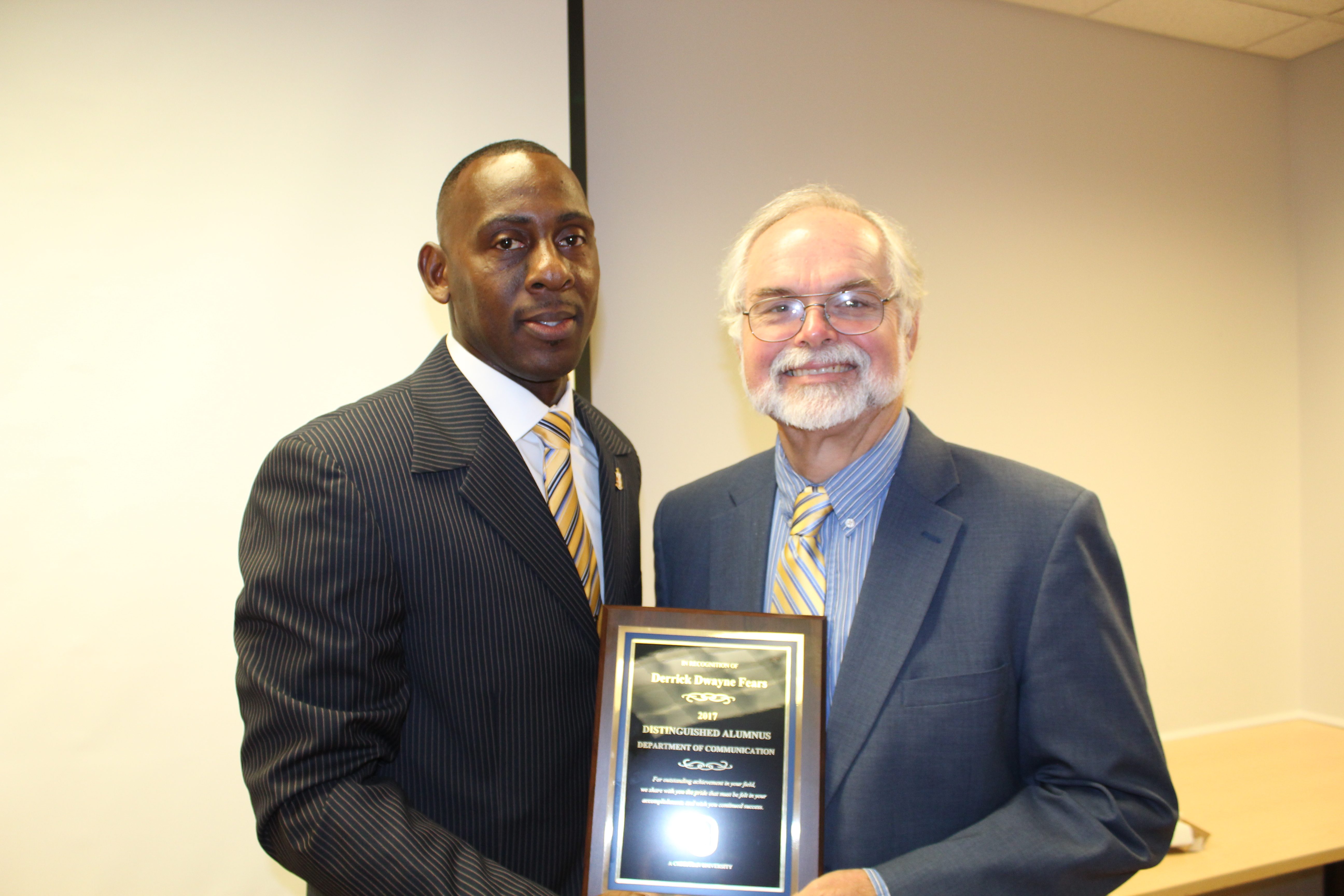 Mere seconds are left on the game clock as Derrick Fears instructs his basketball players how to hit the winning shot.

It’s something the Mississippi Delta Community College hoops coach has done countless times for the men’s team on the Moorhead campus.

Holding two degrees from Mississippi College, Fears took timeout from his basketball duties to be honored as the MC Communication Department’s Distinguished Alumnus of the Year.

“I thank God for Mississippi College,” Fears told dozens of communication students during his October 20 visit to the Clinton campus.

He dreamed of playing in the NBA one day. When that didn’t work out he played one year of pro basketball in Portugal before getting into coaching.

“Never giving up on your dream,” is the message that the Memphis native delivered to a new generation of MC students. They gathered at the Baptist Healthplex, less than a mile from where Fears once shined for the Choctaws on the hardwood at the A.E. Wood Coliseum.

The 1991 MC business communication graduate worked hard in the classroom and hustled on the court to be a Gulf South Conference standout. He received his MC master’s degree in 1995.

Fears thanked professors like Communication Chairman Cliff Fortenberry and the late Billy Lytal for offering constant encouragement along the way. His wife, Victoria, looked on as her husband offered insights for today’s students who may face obstacles as they pursue careers.

Fears also teaches a public speaking class on the Moorhead campus. His priorities include his family, faith and serving as a role model to young men in the Delta.

Derrick was among many outstanding MC grads honored on the Clinton campus Friday. Laurel native Chase Sims, a 2010 MC communication graduate, was saluted as the department’s Young Alumnus of the Year.

With a minor in Christian Studies, Sims, 30 serves as a pastor at Prestonwood Baptist Church in Plano, Texas. He delivered a passionate message to the students that sounded like a sermon from the pulpit.

“I’m a better pastor today because of Mississippi College,” Sims said. “MC prepared me for life, not just a career.”

He spoke how the Baptist-affiliated university lifted his spirits out of a deep depression as a 19-year-old after his father suddenly passed away. God proved to be faithful again after doctors diagnosed the Jones County native with brain cancer in January 2016. He praises God for helping him make it through surgery and live as a cancer survivor.

Chase and his wife, Corrine, a pastor’s daughter, are the proud parents of a 15-year-old son, Jamarion.

Fighting brain cancer with God’s help is something that Chase Sims doesn’t hide when he speaks at churches, colleges and really any place he travels. “Your Heavenly Father is sovereign of all things,” the Mississippi College graduate told students at his alma mater.