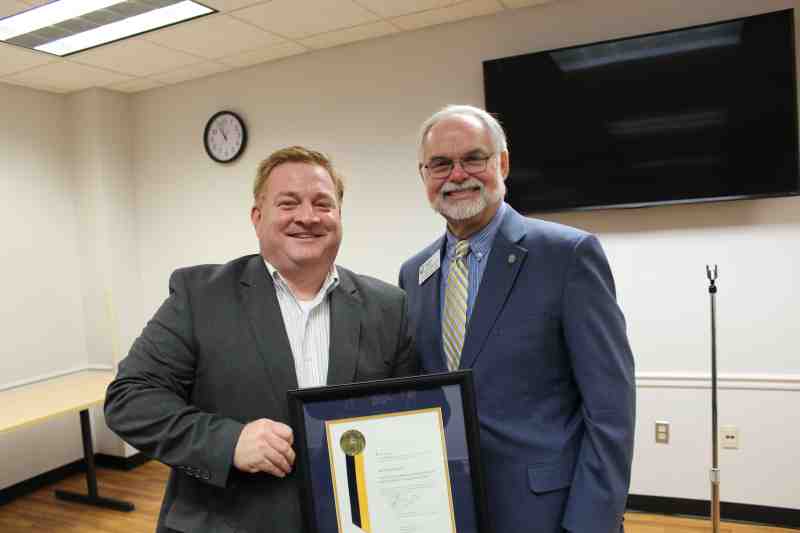 Passionate about serving people, the Mississippi College graduates are getting noticed.

Jones was named the department’s Alumnus of the Year. Rea was selected Young
Alumna of the Year. They received awards on the Clinton campus on October 26.
A 1995 MC alumnus, Jones serves as director of communications for the City of Clinton.

He works closely with Mayor Phil Fisher and other officials, handles daily media
requests, oversees the city’s social media and does much more. Mark formerly led communications for the Salvation Army in Mississippi, Alabama, and Louisiana. It included investing an incredible amount of time when Hurricane Katrina devastated much of the region in 2005.

In the 1990s, Jones worked hard at MC’s campus radio station and assisted Mississippi
churches. After earning his MC degree in mass communication, he received a master of divinity from Southwestern Baptist Theological Seminary in Texas.

Mark’s love of the communications business with the heart of a servant remains a
perfect fit. “This is a calling that God has put in my life,” Jones told communication
students.

His job should get even busier in the coming years as the huge Continental Tire plant
gets completed two miles west of Clinton.

Mark and his wife, Kelly, stay active as Clinton parents. One of their children, Andrew
Jones, is an MC junior majoring in history.

Ashley Cockerham Rea is equally passionate about her work at 15,000-employee
Sanderson Farms. When she began duties as a summer intern at America’s third
largest poultry producer, Ashley “knew nothing about chicken.”

But Rea learned quickly. The MC grad hires and trains recent college graduates at the
$3 billion company. Mississippi College students, she said, should find what they do best and pursue it during their careers. “I encourage you to discover your passion. If you enjoy what you are doing, you will never work a day in your life.”

Homeschooled from kindergarten through her senior year, Rea continued to hit the
books on the Clinton campus. She credits Mississippi College professors with providing her with a solid education from day one. “I am so blessed I chose MC.”

The Baptist-affiliated university, she said, “taught me how to think, act and dream like a professional.”

Communication major Chessa Kosmicki, 20, of Brandon was impressed with both
graduates. “They were very good, very inspirational.”

Sandi Beason, director of communications for the Clinton Public School District, says
the city is blessed to have Mark Jones on the job. “He is a good person who loves God,
loves his family and the Clinton community.”