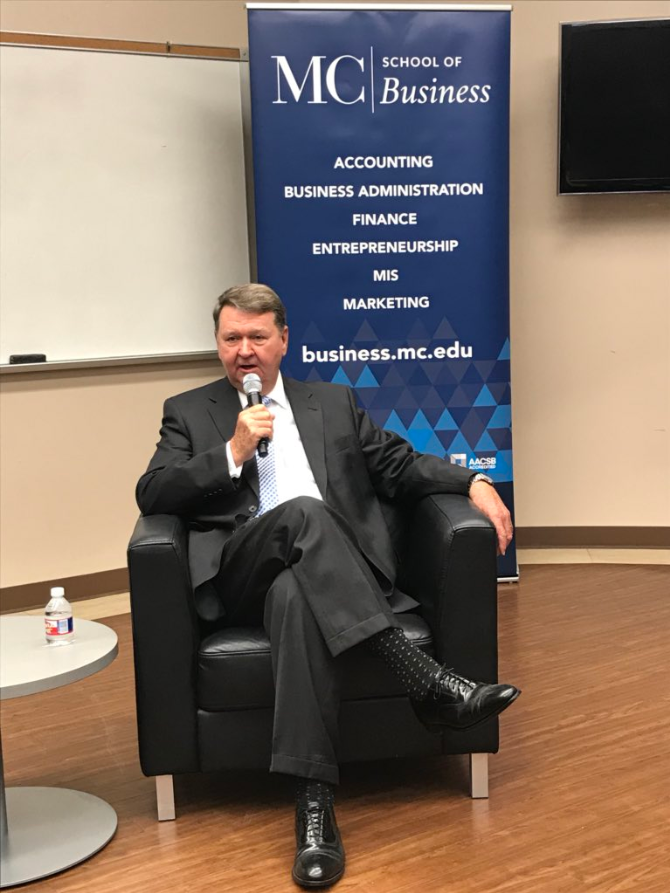 MC School of Business Alumnus of the Year Dan Grafton addresses students on the Clinton campus on September 27.

During 16 years as president of the Madison-based company, Grafton also used his skills as a key business executive to benefit Mississippi. The Mississippi College School of Business Alumnus of the Year for 2018, he returned to the Clinton campus to deliver a lecture Thursday.

Grafton spoke to students packing a Self Hall auditorium about his valuable experiences as a CEO and the importance of team building to achieve success. Strategic planning, and the ability to adapt amid a changing work environment were other points he hammered home.

Executives like Dan Grafton who achieved extraordinary things in the private sector offer an outstanding perspective to MC students soon launching careers. A native of Ellisville, Grafton earned a bachelor’s degree in business at the University of South Alabama in 1974 and an MBA at Mississippi College in 1980.

“We are proud to have Dan Grafton as one of our graduates,” said School of Business Dean Marcelo Eduardo.

“He is one of the most successful executives that our state has produced,” Eduardo added. “It fills us with pride to know that he is a product of our business program.”

The L-3 Vertex Aerospace president announced his retirement in 2007. At the time, he was overseeing more than 11,000 employees working from 285 locations worldwide. That included 400 workers at the company’s Madison headquarters.

After receiving his MBA, Grafton spent four years with the U.S. Air Force as a radar equipment technician. He went to work at what was then Raytheon Aerospace and became L-3 Vertex Aerospace. Dan worked his way up the ladder from an entry-level position in accounting to become corporate controller. Later, his titles included vice president of administration, general manager and COO. After lots of hard work, he was named L-3 Vertex president & CEO.

“It was your team, but of course your leadership that successfully ran one of the largest aerospace and technical companies in the world,” Eduardo said. L-3 Vertex reported $1 billion in revenue, with 13,000 employees today in 30 countries.

The company continues to work closely with the U.S. armed forces “providing maintenance and logistics support of thousands of aircraft and systems, all of it coordinated in Madison, Mississippi,” Eduardo said.

After his retirement, Grafton stayed busy. He’s worked as chair of the board of directors at Trustmark Corporation, and as the leader of the executive committee for Trustmark National Bank. Dan worked with the board at St. Dominic hospital, and as chair of the Nature Conservancy Mississippi. In addition, he’s now associated with the President’s Council of the Naval Aviation Museum Foundation.

Joining Grafton during his MC School of Business visit was his wife, Judy. Ed Boyington, president of Vertex Aerospace, Jerry Host, CEO of Trustmark, and MC President Blake Thompson were on hand for Grafton’s address.