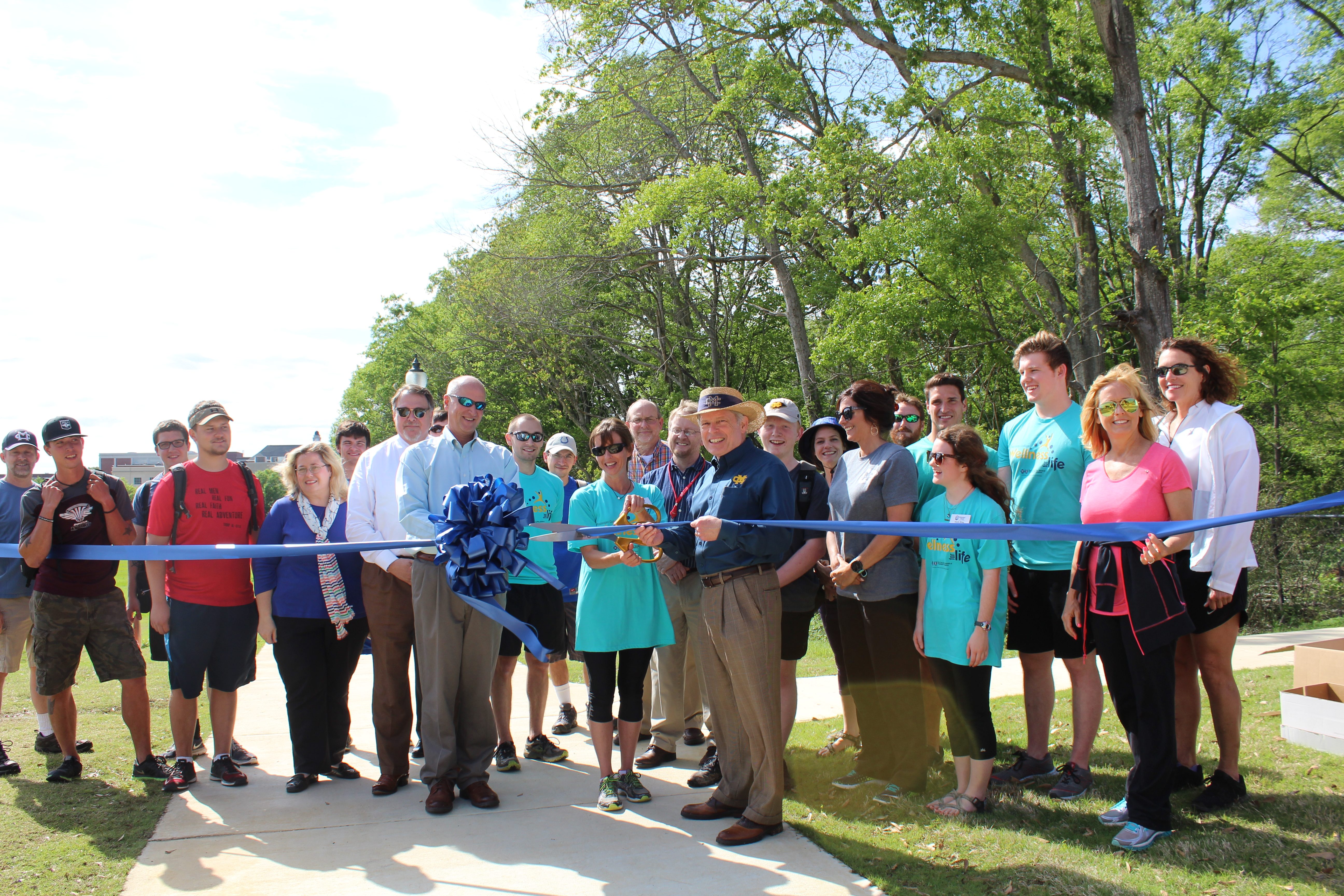 Disc golf players stretch from Charlotte, North Carolina to Southern California. The fast-growing sport is catching on with millions of viewers on cable TV, at state parks and on college campuses.

A grant from the Blue Cross & Blue Shield of Mississippi Foundation made the disc course possible. And it’s a perfect fit with the institution’s expanding wellness programs.

On a windy March 30 afternoon, Hudson was among the players signed up for the initial Clock Tower Disc Golf Tournament drawing 20 teams. He joined the competition after President Lee Royce, Kinesiology Chairman Chris Washam and MC Wellness Coordinator Piper Walters cut the ribbon to formally open the disc golf facility.

The disc golf course on green space near the University Place residence halls represents another major step as MC wellness programs get bigger.

Blue Cross & Blue Shield of Mississippi Foundation grants last year paid for the MC’s walking track and fitness course near the Longabaugh soccer field. The grants established the Farmers Market on the Clinton campus with fresh fruits and veggies for sale for students, faculty and staff.

“This is pretty exciting for us,” Royce said moments before the disc golf tournament got started.

The MC leader received tips from players and gave the sport a try.

Disc golf mirrors traditional golf as far as rules go. Players toss a plastic disc off a tee, and eventually try to land it in a chain-catching metal basket. Some players make par or do even better. Others go a few strokes over par. Like other sports, practice never hurts.

Want to get started? The Paxton Peak store along the Brick Streets of Olde Towne Clinton is one of the Jackson area retailers selling supplies for disc golf players.

It can cost as little as $10 to buy a disc to get going. Purchasing the chain-catching metal basket and other supplies runs the entire price tag to the vicinity of $200. But players insist it’s a terrific investment because the sport produces unlimited enjoyment in the outdoors. It’s one way to get a little exercise, too.

People who love the sport should go to Winthrop University in Rock Hill, South Carolina. It’s the site of the 2017 United States Disc Golf Championship. It runs October 4-7. It’s another case of disc golf lifting the economy by attracting players, fans, and the media. Some call the big event the “Super Bowl” of disc golf.

Disc golf interest is rising in the Magnolia State. There are disc golf courses at the Ross Barnett Reservoir, at Mississippi State University, at 16 state parks, and in cities like Hattiesburg, Jackson and Pearl.

Some area players have traveled the disc golf tour. They relish the idea of trying new courses, whether it takes them to Texas cities like San Marcos or Austin, Texas or metropolitan areas across California.

Mississippi College senior David Zetterholm, 21, of Clinton likes the hobby because it gets him outdoors and remains fun. Tossing a plastic disc in competition, is one way, he said, to make new friends.