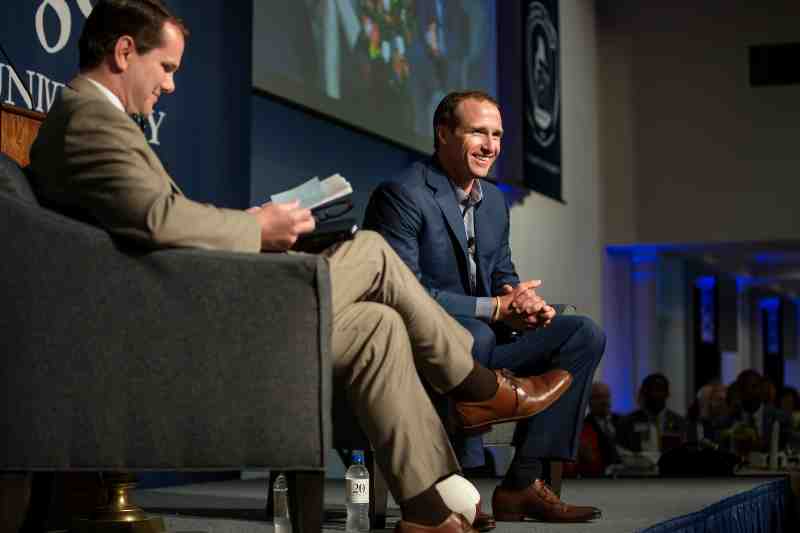 Serving as the keynote speaker at MC’s Spring scholarship dinner, the New Orleans Saints quarterback proved to be a big hit on the Clinton campus. Focusing on his life’s priorities of faith, family and football, Brees delivered a winning message Tuesday.

Blessed to play pro football the past 18 years, the Texas native points to far more important things on his agenda. He puts his walk with God first. He notes how his faith helped him cope with adversity, including a serious injury (torn ACL) as a high school player in the Lone Star State.

“I’m always looking for defining moments and opportunities to influence people in a positive way,” Brees told the audience, including several fans wearing Saints jerseys. Facing disappointments like the blown “no-call” in last season’s loss to the L.A. Chargers to crush their Super Bowl dreams, No. 9 stays upbeat. “Through Christ, all things are possible.”

His appearance led many in the crowd to shoot pictures with their cell phones as the future NFL Hall of Famer entered the room. On April 30, the 2010 Super Bowl champ helped MC raise more than $500,000 to boost scholarships. “This is a great opportunity to give back.”

To highlight the evening, Drew tossed a football from the stage into the waiting arms of Jackson businessman Robert Watson to bring more cash for scholarships.

The amount represents the highest total collected since MC leaders launched the Spring scholarship series in 2008. Since then, the annual events generated more than $4 million.

Fielding questions from President Blake Thompson, the former Purdue standout tossed in a few stories. Some of his young boys were upset after the Saints beat the New York Giants 52-49 in a 2015 Superdome shootout.  It’s funny now, but Brees discovered his kids were fans of N.Y. Giants quarterback Eli Manning and receiver Odell Beckham, Jr. Both players are New Orleans natives.

The 40-year-old Louisiana resident hates being away very long from his wife, Brittany, their three 3 boys (ages 10, 8 and 6) and four-year-old daughter. The NFL season “grind is tough and time consuming. I look forward to the time spent with my wife and four kids.”

Before coming to MC, Brees was familiar with the Blue & Gold family thanks to former Choctaws football star Fred McAfee. “Fast Freddy” McAfee is a New Orleans Saints Hall of Fame member. He serves the Saints staff as player personnel director.

In the locker room when McAfee informed Saints players that Drew was speaking at his alma mater, some thought he meant Ole Miss or Mississippi State. But McAfee made sure the guys knew it was Mississippi College. “Fast Freddie” was recruited by several schools out of Philadelphia High. But he chose MC after people fed him a delicious steak during his visit, Brees said with a smile.

Dating back 193 years, MC’s Christian heritage also appealed to Fred McAfee, and many other students. It led Drew Brees to become the event’s keynote speaker.

Following a news conference, Brees met student leaders at Alumni Hall. “I’m impressed with their maturity. It’s obvious the college is developing incredible young people. They have a very strong faith and will be great leaders.”

Erin Hederman, who will become one of the first 14 freshmen in the inaugural MC Honors College this Fall, gives high marks to the Saints quarterback. “He’s a great role model,” said the Jackson Academy senior.

“He’s a very good guy to look up to,” says Mike Washington, an MC Choctaws football player from Meridian.

President Blake Thompson admires the Christian leader, wonderful family man and NFL star with a big heart. “Drew is a model of faith, hope and service to others.”