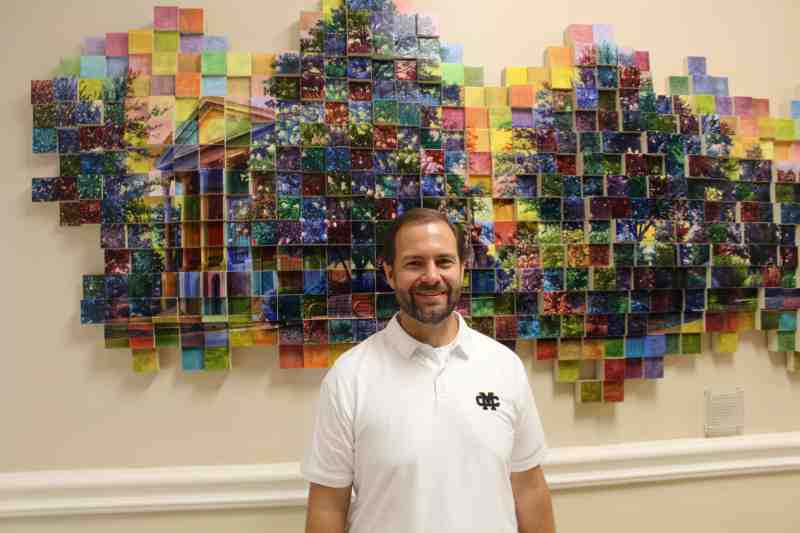 It’s truly a Homecoming for the 2000 MC alumnus, who began working at his alma mater on August 1.

“We are excited to be back at MC. It’s a special place,” Lenow said. “For the whole family, my wife and I, it’s like coming home. MC is a meaningful place for us.”

First recruited to Mississippi College by the late administrator Doc Quick, a beloved family friend, the Memphis native soon discovered he made the right choice.

Mississippi College was where Evan met his future wife, Melanie, a 2001 psychology and Christian Studies graduate. The couple married at the Christian university’s historic Provine Chapel.

A communication major and business minor as an MC undergraduate, Lenow, 41, served until recently as director of the Richard Land Center for Cultural Engagement in Fort Worth.

Part of Southwestern Baptist Theological Seminary, the Texas-based center was established in 2007. It exists to connect faith with issues of life and culture. The research and public policy facility is named for the former president of the Southern Baptist Convention’s Ethics & Religious Liberty Commission.

In his new role at Baptist-affiliated MC, Lenow seeks to strengthen relationships between churches and the 194-year-old institution. It will take him on trips to Baptist churches across the Magnolia State and beyond. Evan wants to build friendships at Mississippi Baptist Convention meetings in Jackson this Fall.

Away from the Clinton campus, Evan and his wife, Melanie, remain full-time parents. Their three daughters, Molly, 14, Elizabeth, 12, and Laurel, who soon turns 8, are students in Clinton public schools. So is their son, 10-year-old William.

They cherish their hometown of Clinton. “I like the friendliness of the people,” he said. “Everybody is extremely friendly and it is a slower pace of life. It’s a community that gets behind its schools and Mississippi College.” As a Clinton High graduate, Melanie knows that quite well.

Evan Lenow is familiar with MC student organizations. He was active in the Student Government Association, the Baptist Student Union, and Shawreth, a men’s civic club. He attended MC’s London Semester program in 1998, and Melanie studied in England one year later.

Two decades ago, Evan’s campaign slogan for student body attorney was pretty memorable. “I know, you know, we all know Lenow.”

Today, Evan knows people inside and outside the Blue & Gold family.

Former MC dean of students Tom Washburn salutes the Tennessee native. “He is a person who knows people and is good to people. He’s loyal in his friendships. He’s just a great guy and everything a Choctaw is supposed to be,” says Washburn, senior adult pastor at First Baptist Church Jackson. “He loves the Lord.”

He brings other MC family ties. His father, Ed Lenow is a 1964 MC graduate and an attorney. His mother, Marge Lenow, is a graduate of Belmont University in Nashville. She’s served as a leader in ministries at Bellevue Baptist Church in Memphis.

Going to work in Nelson Hall as Blake Thompson begins his second year as MC’s 20th president is a dream job. “It’s fun to have a president who likes to get out among the students and be active with social media,” Evan Lenow said. “He has a fresh, energetic vision for Mississippi College.”