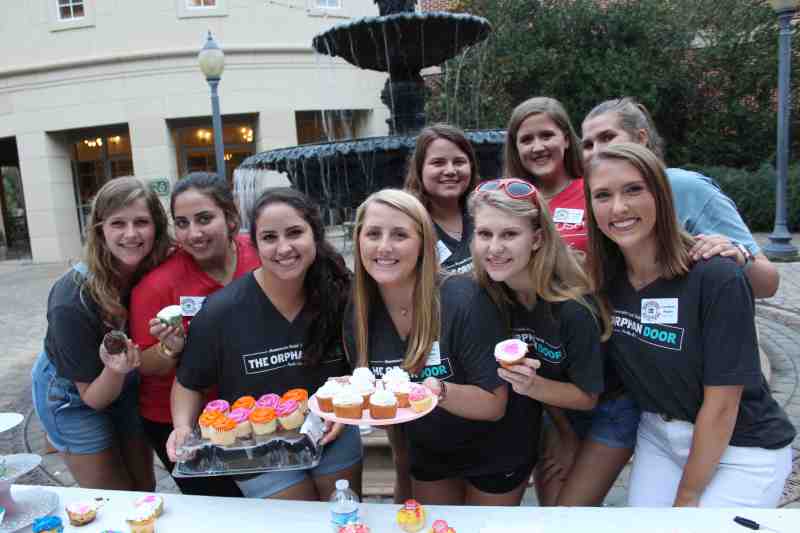 The Nenamoosha social tribe at Mississippi College is raising money for The Orphan Door, a non-profit that supports orphanages for poor children in Guatamala. The MC students were selling cupcakes in September to raise money for this good cause.NT will be involved in more events to raise cash year-round.

Nenamoosha members at Mississippi College like Tiffany Strain and Lyndsey Huber are delighted to support this good cause. But it won’t be their last effort. “NT will be involved in more events to raise cash year-round,” Strain said.

Nenamoosha students will soon volunteer as servers at the annual “Once Upon a Fairytale: A Mother Daughter Princess Tea.” The October 21 event raises cash for tuition, school supplies and uniforms for kids getting a Christian education. Tickets are sold out.

The fund raiser will enable children to attend the Eagle’s Nest Children’s Home in Guatemala. Money generated will also expand the staff of caregivers at Eagle’s Nest International. The princess teas are held in Jackson and Conway, Arkansas. The first princess tea began in Mississippi in 2015.

Guided by their faith, Mississippi College graduates Jenny Blount teamed with her husband, Tyler Blount, to make the first princess tea a success. They remain active in the program that sees young fairytale princesses mingling with guests, enjoying a nice meal and getting entertained. Tea or lemonade remains the drink of choice at the event at The South Warehouse in Mississippi’s capital city.

Jenny Blount serves as executive director of the non-profit, the Orphan Door, that directs funds to the children’s home in Guatemala.

The Blounts, Nenamoosha students and other supporters battle grim statistics. Only 30 percent of the kids in school there graduate from the 6th grade. Half of the population in Guatemala lives below the poverty line.

This year’s prayer, Jenny said, is that “a solid, Christian education will prepare these children to be the future leaders of Guatemala. We will also bring a team of doctors to do an annual medical review of each child there.”

It costs $550 to pay for a child to be schooled and receive an education for a year at the Eagle’s Nest Children’s Home. The country south of Mexico is home to volcanoes, rainforests and ancient Mayan sites. Poverty is often a way of life for residents in the capital of Guatemala City and villages near coffee fields.

Seeing the Nenamoosha social tribe involved as princess tea servers, their recent cupcake sale, and support of a clothes drive for orphans is a real blessing to The Orphan Door, Jenny Blount said. The MC students will also host a 5K run to partially benefit the cause. “They are wonderful.”

For more information, go to www.theorphandoor.org