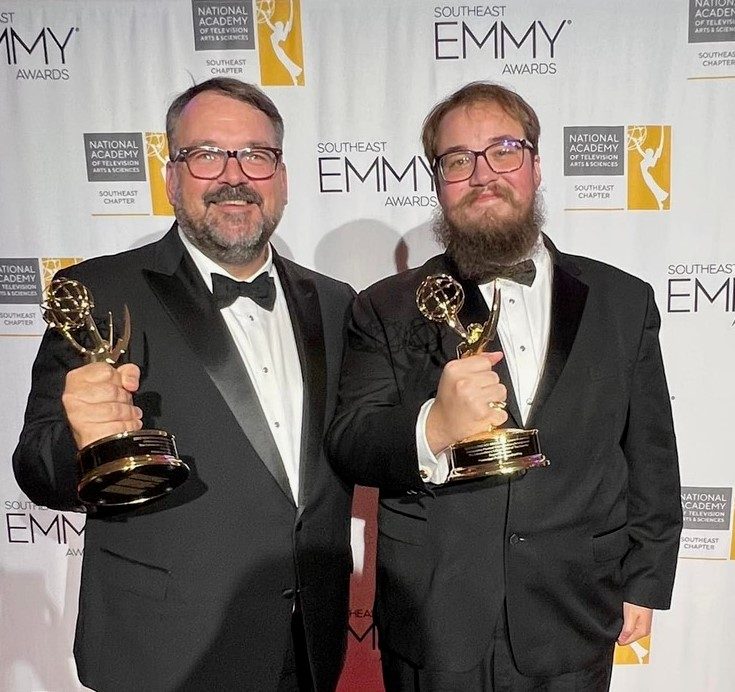 Anthony Thaxton, left, and his son, Bryant, display the Southeast Emmy Awards they received from the National Academy of Television Arts and Sciences June 18 in Atlanta.

Last fall, Anthony Thaxton ’94 was thrilled that his alma mater would host the premiere screening of the documentary he produced with Robert St. John, “Walter Anderson: The Extraordinary Life and Art of the Islander,” during Mississippi College’s Homecoming.

Showing the documentary for the first time at MC “makes me incredibly proud,” Thaxton said. “It’s the biggest thing I’ve ever been a part of.”

That “biggest thing” has yielded awards that are among the most prestigious ever received by an MC alum.

The National Academy of Television Arts and Sciences selected the documentary for a pair of Southeast Emmy Awards, and Thaxton made sure MC was represented at the ceremony in Atlanta.

When he took the stage with St. John to accept the Southeast Emmy Award for Outstanding Documentary (Historical), Thaxton wore a bowtie that had belonged to another influential artist: the late Dr. Samuel Gore, the “Founding Father of the MC Art Department,” his friend, mentor, and one of his most ardent supporters.

“I did my first art videos with Dr. Gore in the Art Department at MC, and to think it led to all this!” Thaxton said. “I had worn the bowtie before when I received the Outstanding Art Alumnus Award from MC. It was a way of reminding me about all the encouragers I’ve had in my path, Godly men and women who poured encouragement into me.

“I was an art education major at MC who happened to want to do television production with art. Dr. Gore gave me the space for that, and allowed me to film art workshops in the department. I’m proud of my heritage at MC. I’m a proud Choctaw, and proud I was given the encouragement and support to pursue my artistic interest, even though it may not have fit into the regular mold of art education.”

Thaxton wasn’t the only MC graduate – or the only Thaxton – to be christened a Southeast Emmy winner last month. His son, Bryant ‘22, also received a golden statuette from NATAS for Outstanding Music Composition/Arrangement.

It was a remarkable Father’s Day Eve gift that Anthony Thaxton will never forget.

“Had we just been nominated, that would have been a treat,” he said. “For me to win my first Emmy and for my son to win his first on the same night, that was a real blessing.

Bryant’s acceptance speech stole the awards show. When his name was called, Bryant methodically approached the dais and gave a message that many Emmy winners have promised to say, but very few have delivered.

“OK, I was told to keep this brief, so, thank you,” he said before walking off the stage to laughter and thunderous applause.

“I didn’t want people to look at me and say ‘I’m an Emmy winner,” explained Bryant, who was a senior music major at MC when he composed and conducted the original soundtrack. The music was recorded in Anthony Thaxton’s studio and in MC’s band hall, and Bryant mixed the sound. “The most important thing to understand is things like this don’t happen on your own.

“For me to have this opportunity has been the result of things my parents have done, all the connections I have made at MC, and the support I have received throughout my life from talented friends.”

This includes friends Cole Smith ’20, and Brandon Pratt ‘21, who performed the compelling percussion on the soundtrack under Bryant’s direction.

“It’s a very collaborative thing,” Bryant said. “It should be, ‘Look at what we did together.’”

It’s an approach that served him well, especially working within a family dynamic where one of your greatest supporters – your father – is also the person in charge. Not everyone can produce in that environment, let alone, capture a Southeast Emmy.

“When I approached Bryant in 2019 about making music for the documentary, he said he wasn’t sure if he could do it,” Anthony Thaxton admitted. “We started talking about the type of instrumentation he would use, the process we would need to follow to tell the Anderson story. After he started writing some of the pieces and getting some feedback, it all began to come together for him.

“To see him get nominated for the Southeast Emmy before he even graduated college, and then to see him win it just after he graduated, was a validation of his talent and a harbinger of good things to come for him.”

For three years, Thaxton and St. John collected personal stories about Anderson from his children to produce the documentary and a 276-page full-color coffee table book about the man who has been called “The South’s Greatest Artist.”

The film and book both contain never-before-seen artwork by the Mississippi Gulf Coast resident and never-before-heard recollections from those who knew him best. The book is already in its second printing, and Thaxton will serve as a panelist at the Mississippi Book Festival at the State Capitol in August.

“I had a lifelong dream of just doing one book signing at Lemuria Bookstore (in Jackson), and we’ve already had three,” he said. The book spent 19 weeks on the Mississippi Reads Best Seller list, including five weeks at No. 1. It is available for sale at independent bookstores throughout Mississippi.

The documentary was a true family affair for Anthony Thaxton. His daughter, Sydney, a student at Jackson Academy, contributed cinematography to the effort, while his wife, Amy ‘97, provided extensive research for the film.

The documentary was nominated for four Southeast Emmy awards, including Outstanding Direction and Outstanding Editing. Thaxton family members aren’t content to rest on their laurels, though. They are already busy on their next project – a documentary exploring the life of Eudora Welty, one of Mississippi’s most beloved authors.

Anthony Thaxton, Amy Thaxton, and St. John are producing the documentary, while Bryant Thaxton will be contributing the score. Perhaps more Southeast Emmy Awards are in their future. But few could match what the filmmaker father and conductor son shared on that award-winning night in June.

“We just kept looking at each other and saying, ‘Hey, you’re an Emmy winner,’” Anthony Thaxton said. “It was such a delight being able to share that with him. It was a special moment to look back and say what a blessed life we have, being able to do what we do, being co-creators with God, and creating something that wasn’t there before.

“What a privilege that is. It’s unbelievable.”