FLIP the Script: Dance Marathon at MC a Philanthropic Culmination, not Competition 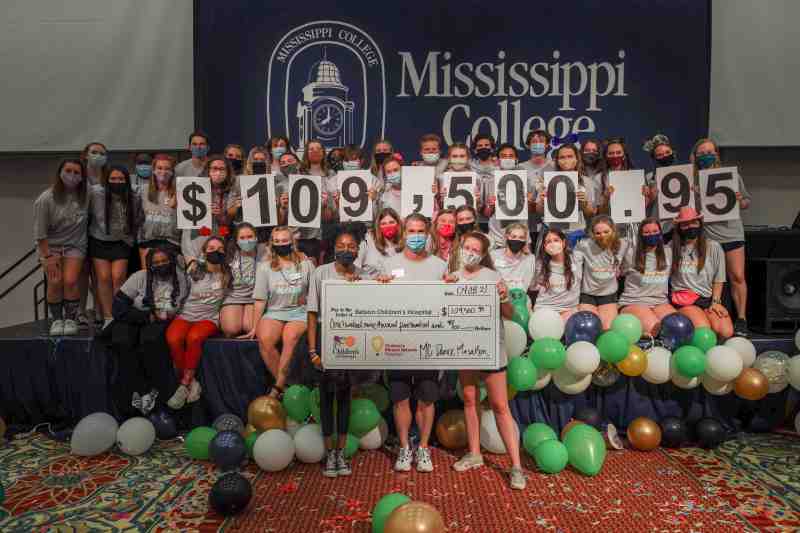 When the independent New Kids dance group’s energetic Harry Potter-themed performance was announced as the winning act during the annual Swerve student dance competition at Mississippi College on March 10, there was little debate among its 17 members about where their prize money should be invested.

After spending countless hours integrating an intricate choreography into their highly charged dance routine, then executing the engaging Hogwarts-inspired storyline flawlessly in front of a packed house of dance enthusiasts, the group of performers and its spotlight and makeup artist wanted to make the most of the $5,000 purse.

Only one option seemed fitting: Dance Marathon at MC.

“Because New Kids members are made up of a wide variety of students on campus, we decided it would be best to put our money towards an organization that meant a lot to all of us,” said Marion Pohl, a junior public relations major from Bay St. Louis and co-coordinator of the group. “Most, if not all, of our members have been involved with Dance Marathon in some capacity, which gave us something to all work hard for.

“It was an amazing opportunity to be a part of something so special, but it makes it that much better when you’re doing it for a cause bigger than yourself.”

That cause is Children’s of Mississippi, the umbrella organization at the University of Mississippi Medical Center that houses the state’s only children’s hospital and pediatric clinics statewide – the beneficiaries of the annual Dance Marathon at MC event.

Beginning in 2016, support for the MC branch of the Miracle Network Dance Marathon, a nonprofit organization that raises money for pediatric patients fighting various childhood illnesses, has grown exponentially – from $12,000 in its first year to close to a quarter of a million dollars since. Participants dance to a variety of musical genres, including pop-rock, hip hop, country line dancing, and swing, for six hours straight to honor how Children’s of Mississippi patients battle their illnesses every day.

This year’s Dance Marathon at MC is scheduled for 6 p.m. on Thursday, April 21, in Anderson Hall in the B.C. Rogers Student Center on the Clinton campus. Along with an evening of dancing, the event will include refreshments, additional fund-raising opportunities, and a final reveal of the total amount collected for Children’s of Mississippi. Rather than a competition like Swerve, the nonstop dancing represents the culmination of participants’ efforts to help sick and injured children across the state.

Dr. Jonathan Ambrose, associate vice president for the student experience and dean of students at MC, helped design a servant leadership class for incoming scholars – called the Freshman Leadership Initiative Program, or FLIP – to develop their skills and contribute to events like Dance Marathon throughout their collegiate careers.

Enter Dance Marathon. And as the event has grown during the last six years, so has FLIP: the class has almost doubled in size – from an average of 20 to 37 this semester – and a committee of upperclassmen has been created to help FLIP participants with Dance Marathon.

“One thing I love about Dance Marathon is its buy-in from the campus community,” Ambrose said. “It gives students an idea of what a philanthropic activity is all about, especially when it’s attached to something so near and dear to peoples’ hearts as Children’s of Mississippi.

“Almost everybody in the classroom has some connection to Children’s of Mississippi or a local children’s hospital in their own state. It’s something that’s a great need in our own community.”

Caroline McCaleb, a freshman biology/pre-med student from Hoover, Alabama, said she was looking for a way to get involved on campus, meet others striving to grow and learn, and become part of something bigger than herself when she discovered FLIP and Dance Marathon.

“This seemed to be the perfect opportunity as I have a heart for the Children’s Hospital,” McCaleb said. “I was hopeful that this would be a time for me to expand on my leadership skills and put them into practice. I knew this would challenge me in many ways.”

She said FLIP has helped her discover what it means to be a servant leader.

“We have learned who we are as leaders, how to understand others, and the importance of empathy,” she said. “We have also learned the value of consistency, and how it leads to integrity, leading to trust. Trust is foundational to leadership.

“We are also learning hands-on through our committees and participation in small events. We are learning that to lead is to serve. I am proud of the preparation and work our team has done. We will be very prepared to serve on the day of the Dance Marathon!”

As a freshman, David Torrent attended the event, was asked to serve on a Dance Marathon committee as a sophomore, and is now one of the fund-raiser’s directors, along with Alli Dowdy and Kayden Chistov. The junior math education major from Oxford said that once he learned about Dance Marathon, he was honored to provide as much support as possible.

“The growth of Dance Marathon at MC has been so impressive to me,” Torrent said. “Every year, we have blown our own expectations out of the water when it comes to total money raised. The hospital is very close to us, and every year I find more and more people who have personal experiences with Children’s of Mississippi.

“Many of the things we do on campus are fun and competitive. Dance Marathon, however, is much more than just a competition between our campus organizations. This is a cause bigger than ourselves and bigger than this University, and I think students more and more are continuing to buy into that idea.”

Torrent doesn’t just talk a good game: he has lent his personal time and effort to the cause. Last year, he sold a variety of baked goods, participated in fund-raising activities on social media, and set up a tent on the Quad to grill hamburgers and hot dogs for sale. This year, he is making digital solid-color drawings of other people’s photos for sale, and is accepting donations on his Donor Drive webpage. He is more than halfway toward his stated goal of raising $2,000 for this year’s Dance Marathon.

“There are a lot of ways to get creative and fund-raise for the hospital,” he said. “I would encourage students coming to MC to enroll in the FLIP class. Not only is the capstone project of Dance Marathon such a blessing to work on, but it is also a valuable class to learn about leadership.

“Working with Dance Marathon can help you learn valuable people skills when it comes to business and fund-raising, as well as working your role to help a whole team come together to make this thing happen.”

The opportunity for students from all organizations across campus to unite for a common goal makes Dance Marathon so unique, said McCaleb, who serves on FLIP’s Public Relations Committee.

“We can see what an impact we can make when we all come together and support Children’s of Mississippi,” she said. “I have seen so many students put so much time, effort, and money into supporting these kids. It is a way for us to serve the community as a student body and show the love of Christ as we give what we have to help others.

“Dance Marathon is exciting and provides students with a tangible way to see the impact of giving. How thankful we are to have the opportunity to serve in this way!”

The students’ fund-raising efforts have made an impression on Children’s Miracle Network, the national fund-raising arm to which Children’s of Mississippi belongs. Ambrose said CMN representatives were “blown away” by MC’s support last year: despite the COVID-19 pandemic, the Dance Marathon at MC generated more than $109,000.

“No other school of our size has ever reached that milestone,” Ambrose said. “The students’ support of Dance Marathon goes back to the mission of MC as it relates to service: being the hands and feet of Christ. That can be accomplished through dancing, and it’s important to teach students that there are things in the world much bigger than themselves.

“It’s great being able to instill this, not only in FLIP students, but in all students at MC. Dance Marathon is the culmination of all the great work our students have done. They never cease to amaze me with all they are able to accomplish. Dance Marathon is a seed of philanthropy planted in them that we hope will last a lifetime.”

It’s a seed that can sprout from a gift of any size, according to Pohl.

“I think that most students feel as if they can’t raise enough money for their donations to be worth something,” he said, “but they mean it when they say every penny counts. It does not matter if you are embarrassed that you didn’t raise more than a person in a different club or tribe – what matters is that you are legitimately aiding in saving a little one’s life.

For more information or to support Dance Marathon at MC, click here.