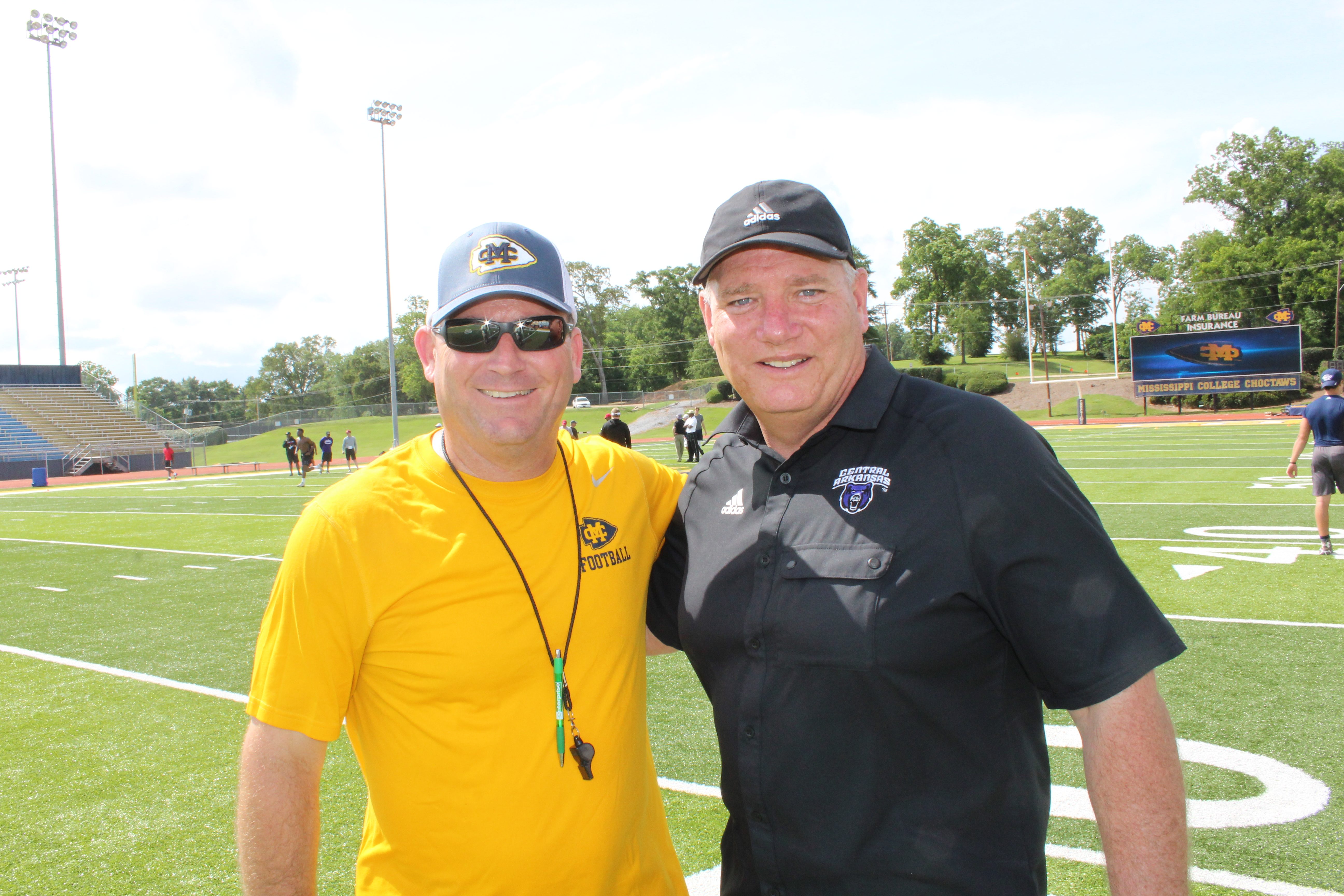 Mississippi College Choctaws head football coach John Bland is pictured with Central Arkansas head coach Steve Campbell on May 30. Staffs from the two schools will team up at a July 11 football camp on the Clinton campus.

About 300 high school football players visited Mississippi College to sharpen their skills for the 2017 season.

Coaching staffs from the MC Choctaws and the University of Louisiana Ragin’ Cajuns pooled their talents on May 30 to go over blocking, tackling, speed drills, receiving routes and much more.

“This is my second year to come, and this is a good measuring stick for our guys to compete,” says Casey Orr, head coach of the Noxapater Tigers in Winston County.

For Ryan Keeton, coach at Nanih Waiya near Louisville, the Mississippi College camp was a nice way to showcase some of his talented players. “We are making the rounds,” he said. Some of his players recently attended football camp at East Central Community College in Decatur.

Hot temperatures in Central Mississippi were a sneak preview of the weather to expect when the 2017 season rolls around in mid-August. Several family members and friends watching the action in the stands brought umbrellas to fight the sun.

Once again, there were no shortage of coaches at the Christian university’s first football camp of the summer season.

The price of $30 for the campers was pretty affordable for the two-hour session on Tuesday afternoon.

Players like Darius Shipp, 16, an incoming senior at Lewisberg High in DeSoto County, enjoyed going to last year’s MC football camp. Coming back just made good sense for him.

“I liked the atmosphere and the way the coaches are pushing you to make you better,” says Shipp, a defensive tackle. He hopes to play college football and hit the books as a criminal justice major starting in Fall 2018.

What does he like about the sport? “It builds your character to be a better person,” Darius said.

Players from Mississippi, Louisiana, Alabama and Tennessee high schools gulped water bottles and energy drinks to stay hydrated between drills. High school and college coaches did a little networking at the stadium before camp wrapped up around 6 p.m.

There were plenty of jobs to go around for the visiting teams of coaches.

It was his first experience at an MC football camp for Max Harmon, 16. A wide receiver at St. Joseph High School in Madison, he came to check out the competition, and felt it was worth every minute.

Frank Bowman, head football coach at Macon Road Baptist High in Arlington, Tennessee, stopped by the MC camp to accompany a trio of his current players. Some of his former players have landed spots on the Blue & Gold football roster at Mississippi College.

“This is a very successful camp,” said MC continuing education director Ken Gilliam as he handed out information to players. “We’ve had very good numbers.”

For more information on Mississippi College summer camps in June and July, contact Ken Gilliam at 601-3264 or gilliam@mc.edu. And to learn more about the July 11 football camp, reach assistant coach Edgar Weiser at 601-925-3868 or eweiser@mc.edu