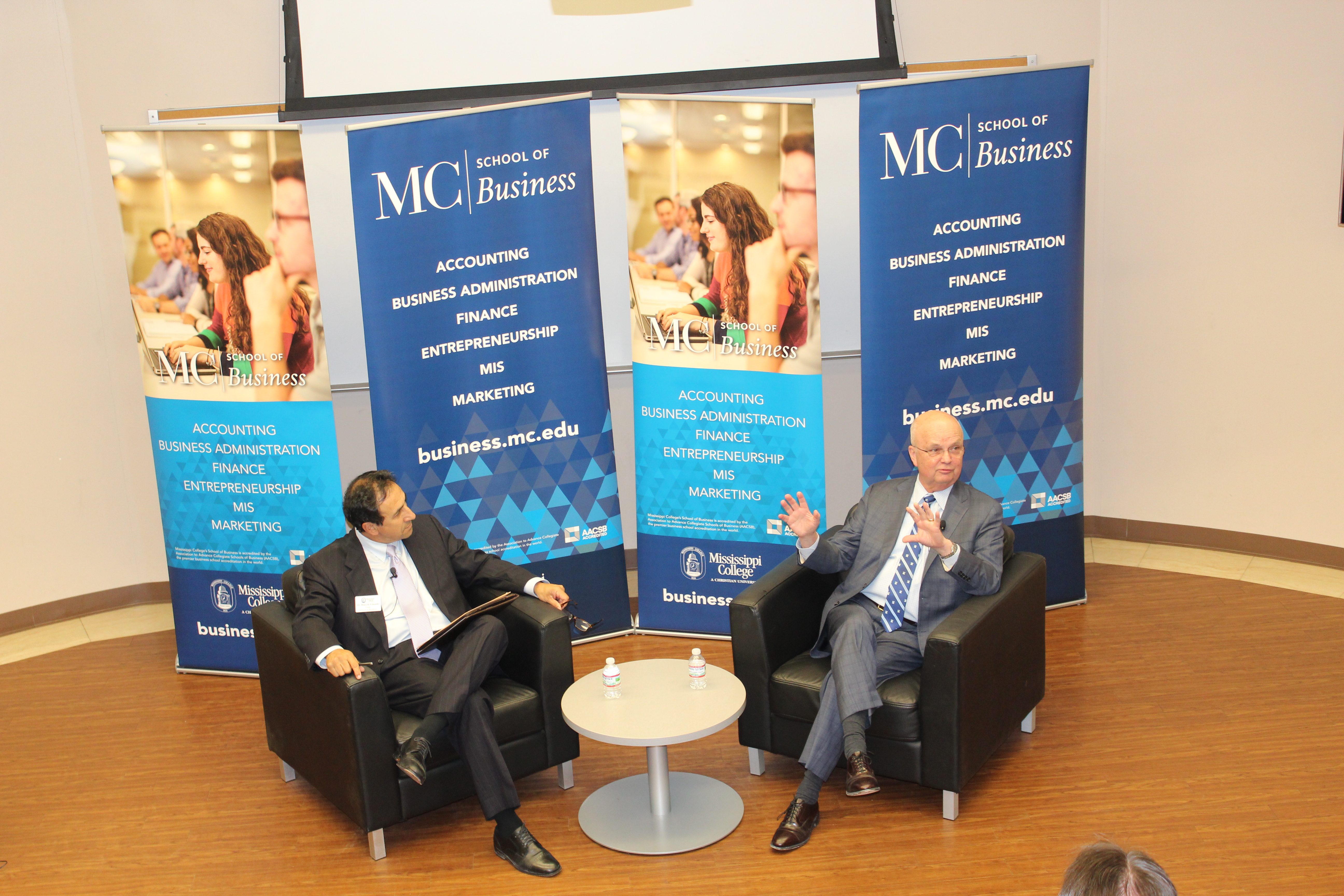 Former CIA director Michael Hayden knows the world’s trouble spots and their leaders. From North Korea to Syria and Iran, he touched on volatile issues impacting the United States as the guest speaker at Mississippi College’s Spring Scholarship Banquet. This year’s program raised a record $470,400 for MC students.

Before Tuesday evening’s event was over, Hayden left hundreds in the audience with a much better understanding of what’s at stake for the American people. Earlier in the day, the former National Security Agency director discussed threats posed by cybersecurity issues as he spoke to MC students on the Clinton campus.

The signature event at the Baptist-affiliated university has raised more than $3.6 million for students since it began a decade ago. It represents the final one for retiring President Lee Royce, who received a standing ovation from MC supporters at Anderson Hall before introducing General Hayden.

Later this year, President Donald Trump plans meetings at a neutral site with North Korean President Kim Jong-un, perhaps in a country like Mongolia, Hayden says. The stakes are high with North Korean’s nuclear capabilities a threat to Japan, the USA and other nations. Trump is hopeful the meetings will produce “worldwide success.”

But Hayden, who served as head of the nation’s premier intelligence agencies during the Bush and Obama administrations, expresses the need for caution.

The United States trying to take away North Korea’s nuclear capabilities appears to be “more dangerous” than allowing the country to keep the weapons of mass destruction, he stated.

A retired four-star Air Force general, Hayden is the author of his memoir “Playing to the Edge: American Intelligence in the Age of Terror,” that was a “New York Times” best-seller in 2016. He was featured on the HBO documentary “Manhunt” that looked at espionage in the eyes of people who led the war against Osama bin Laden.

Despite the spread of ISIS and other global terrorist groups, Hayden says “We are actually pretty safe” in the United States. Threat levels diminished the past few years. “We are in a reasonably safe place,” the speaker told his audience at Anderson Hall. The last terror attack in New York City on October 31, 2017 killed eight people in the shadow of the World Trade Center.

Meeting earlier with hundreds of students at Self Hall in the School of Business, Hayden spoke about cybersecurity concerns involving threats of stealing personal information on social media. At one point, he drew laughs when saying students might direct their questions to Mark Zuckerberg, the Facebook CEO.

On USA involvement in the war in Afghanistan that’s been pushing 18 years, Hayden sees it as a condition that needs to be “managed and is not to be solved. We are there to manage the risk.”

The Trump administration, Hayden said, “amped up our presence there.”

In demand as a network commentator on global issues, Hayden serves as a distinguished visiting professor at George Mason University in Virginia.

There was an initial amount of about $200,000 raised to fund the scholarship. The Royces retire on June 30 and move to Northern Virginia to live closer to their son Mark Royce, a college political science instructor.

President Royce deserves a great deal of thanks for his many achievements – from boosting enrollment and new academic programs to strengthening the school’s finances, Sones said. Since arriving at Mississippi College in July 2002, he’s “provided extraordinary leadership.”