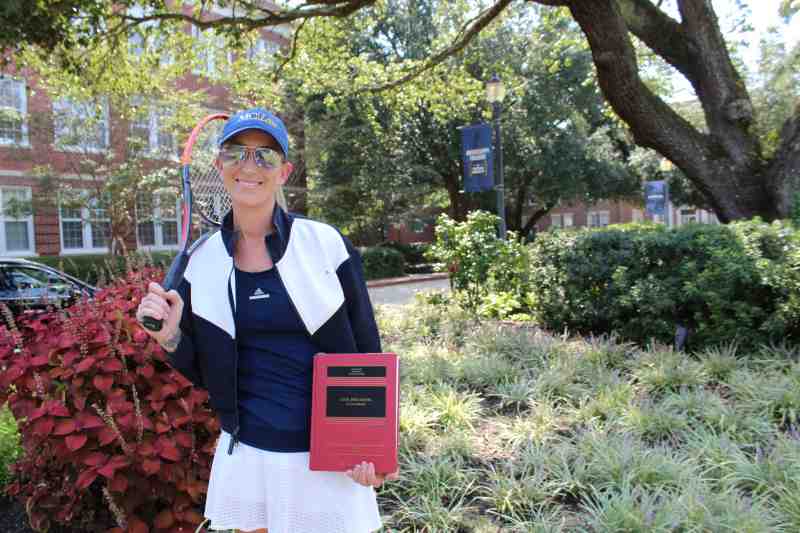 Lindsey Nelson ranked 424th best in the world in singles with the Women’s Tennis Association. As a ten-year tennis pro, her WTA rating of 347 in doubles was equally impressive.

These days, the former tennis pro from California remains focused on hitting the books at the Mississippi College Law School.

There are similarities to intense competition on the tennis court, and her journey to becoming a lawyer.

The former University of Southern California tennis star sees the benefits of playing her favorite sport with passion.

Fierce competition on the tennis court, says the first-year law student, involves problem solving and “working under pressure. You must be mentally tough,” Nelson said. “It transfers well to law school and the legal profession.”

Why MC Law for the California native?

Family reasons played a big part. Her husband, Patrick, is a huge Mississippi State football fan from Amory. The couple lived in Nashville before the move to Jackson. Coming along for the ride to the Mississippi capital city were their two children, Lola, 1, and Tripp, 2.

Getting top grades at MC Law is something Lindsey strives for, just like racking up tennis triumphs.

For the new member of the Class of 2022 her dream job is to enter the legal profession in Mississippi as an advocate for the underserved community.

MC Law Dean Patricia Bennett is delighted to welcome Lindsey aboard with 126 other first-year students. She’s delighted the 33-year-old native of Orange County, California will put down roots in the Magnolia State.

“We are pleased when students come to MC Law to get a legal education and see what Mississippi has to offer and decide to stay here,” Bennett said. “I’m confident that this generation of future lawyers will make Mississippi a better place for all.”

Lindsey Nelson comes from a family noted for public service. Her mom is a public school teacher and her dad is a small business owner. Her aunt serves as a nun.

She’s a firm believer in making a difference on the planet. MC Law’s commitment to Mission First legal aid made the school near the Capitol a perfect fit. The legal aid office operates in Jackson with staff members and more than 300 volunteer attorneys, while serving 1,200 clients annually. Lawyers across the Magnolia State donate their time to help those in need.

On the University of Southern California tennis team from 2004 to 2008, Lindsey shined as a student-athlete. She was a two-time NCAA Division I singles tennis finalist in Spring 2006 and Spring 2007. She was named the PAC-Ten Division I Athlete of the Year for her sport in 2006-2007. She excelled in the classroom as an English and Creative Writing major at USC in Los Angeles.

During her pro career, Nelson competed in the U.S. Open Tennis Championship in 2007. She was the doubles champ at the USTA professional tennis tournament in Atlanta in 2009, among many highlights. Her favorite player growing up was Monica Seles, the former No. 1-ranked women’s tennis player with nine Grand Slam titles. Today, Monica is an author and speaker following her 2008 retirement.

While she still plays the game, Lindsey continues to energize MC Law students this Fall.

Classmate Kathy Wagner, 60, a first-year student, says Lindsey’s competitive nature brings out the best in them. And she calls Lindsey a source of inspiration.

“I have seen how disciplined she is and how her positive nature and fearless attitude helps make all those around her a better version of themselves,” Wagner says. A former mechanical engineer and Gulfport mother of six grown children, Kathy herself proves inspirational to MC Law classmates.

In classrooms, Lindsey Nelson will be slammed with her studies in torts, contracts, property, civil procedure and constitutional law. “I’ve been an athlete my whole life,” Lindsey says. “This pushes me out of my comfort zone.”

One of life’s lessons learned on the tennis court is moving on after losing a point or contesting a close call. “You can’t let the little things get to you.” That gritty attitude should help elevate her law career.