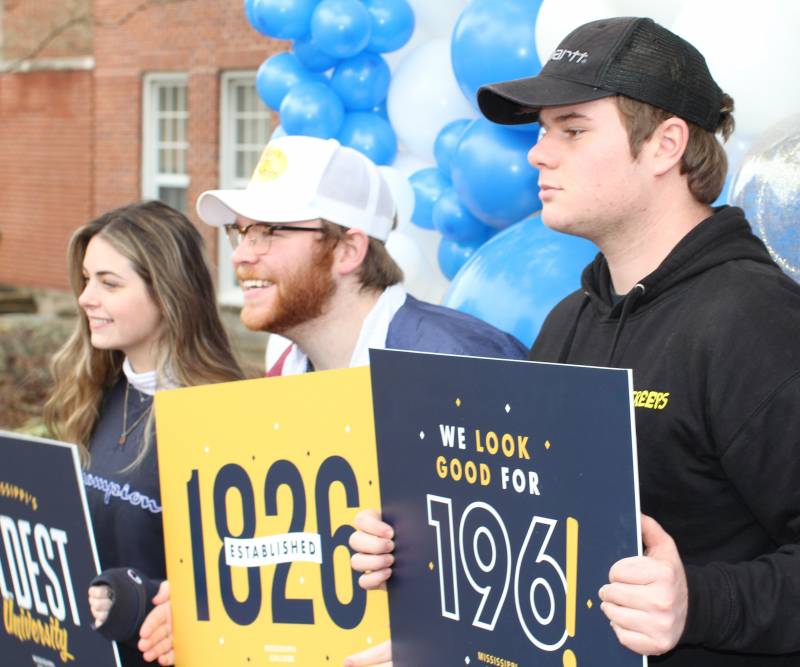 Students pose for pictures in a 'Selfie Booth' while celebrating Mississippi College's birthday during the 2022 Founders Day celebration on Pedestrian Street.

The much-anticipated return of students to Mississippi College in early January to resume the academic session heralds a robust slate of activities on the Clinton campus guaranteed to entertain and enlighten every member of the community.

Local residents can rub elbows with well-known celebrities while supporting the University’s athletic and scholarship programs at formal banquets, pay homage to the institution’s rich history during traditional celebrations, delight in the musical and stage talents of students in charming theatrical performances, and marvel at the athletic prowess of student-athletes during a host of late-winter and spring sporting contests.

Many of the exciting activities scheduled for the MC campus this semester will include:

Following chapel service on Tuesday, Jan. 24, generous slices of cake decorated in blue-and-gold icing and piping hot cups of a special MC blend of BeanFruit coffee will be served along Pedestrian Street to cut the winter chill and celebrate the University’s 197th birthday during Founders Day.

The tasty tradition acknowledges MC’s original charter as Hampstead Academy in 1826. It recognizes how far the Christian University has come from the lean years of wartime and the Great Depression to the more prosperous developments of the modern era. Social media photo opportunities, Mississippi College trivia, and other activities keep students engaged with their University’s history and help the MC Family stay attuned to its upcoming bicentennial in 2026.

Choctaw student-athletes will compete in a full slate of basketball, baseball, softball, track, soccer, tennis, and golf contests throughout the late winter and spring while pursuing their respective Gulf South Conference championships. MC will host the annual Dr. Don Phillips Athletics Dinner on Thursday, March 23, to support their efforts.

“The event gives those focused on the betterment of our athletic program and alumni who were former athletes at MC an opportunity to give back to the University,” Bobo said.

A silent auction and live auction of sports memorabilia will accompany the banquet, which supports men and women competing for MC in 18 Gulf South Conference sports.

Mississippi College provides the setting for a number of musical and theatrical performances open to the public. Among them will be the Lyric Stage @ MC presentation of “Little Women,” based on the popular Louisa May Alcott novel, scheduled for three 7 p.m. performances Thursday-Saturday, March 30-April 1, and one 3 p.m. performance Sunday, April 2, in Williams Recital Hall in the Aven Fine Arts Building.

In addition to the theatrical production, the Music Department has several musical performances lined up for the spring. Among them are the Leontyne Price Scholarship Recital at 7:30 p.m. on Monday, Jan. 23, in the Williams Recital Hall; a Valentine’s Day Jazz Band Concert at 7:30 p.m. on Tuesday, Feb. 14, in the Williams Recital Hall; a Music Department Showcase at 7:30 p.m. on Friday, Feb. 17, in Swor Auditorium in Nelson Hall; a Singers Spring Concert at 3 p.m. on Sunday, April 16, in Provine Chapel; and a Worship Collective concert featuring the Choctaw Singers at 7:30 p.m. on Thursday, April 20, in the Chapel at First Baptist Church, Clinton.

The Spring Scholarship Banquet, the largest fundraising event at Mississippi College, will return in 2023 to benefit the University’s scholarship funds.

Laurel residents Ben and Erin Napier, stars of the HGTV series “Home Town,” will headline the event, scheduled for the evening of Tuesday, April 4.

Bobo said the Napiers are the latest well-known celebrities to appear at the banquet, which has including such luminaries as Bob Dole, Condoleezza Rice, Steve Forbes, Rudy Giuliani, Drew Brees, and Reba McEntire.

“Traditionally, we have had question-and-answer sessions for students and a donor reception prior to the dinner, where donors can meet the guest speaker,” she said. “It’s a fun event that attracts people from all over who love Mississippi College and are interested in the guest speaker.”

The Mississippi College Dance Marathon, a fun-filled evening of continuous dancing that culminates MC students’ efforts to support Children’s of Mississippi patients, will heat up the dance floor in Alumni Hall this spring. Participants will dance for six consecutive hours to honor the way hospitalized children fight for their health every day. In its seventh year, the event has raised more than a quarter of a million dollars for the only hospital in the state devoted exclusively to the care of sick or injured children.

In April, Mississippi College is set to host the MC Athletics Hall of Fame Induction Banquet. Up to eight of the greatest Choctaw athletes, coaches, or support staff will be inducted into the Class of 2023, as the ceremony resumes in the spring after a pandemic hiatus.

Bobo said fans of all MC sports will enjoy gathering to mingle with and honor the latest members of the select group of Mississippi College athletic legends.

“Former athletes, coaches, and support staff are selected to the M Club Hall of Fame based on their prowess on the field or the court, or their coaching ability or support role,” Bobo said. “Nominations come from M Club members, and a selection committee vets the individuals before selecting the class.”

One of the signal events for the University and the Clinton community is scheduled to take place this spring: the dedication of the Gore Arts Complex.

Packed with artwork produced by Gore’s former students as well as the master artist himself, the complex is a fitting tribute to the man known as the “Founding Father” of the MC Art Department.

MC will honor its 2023 graduates during its annual Spring Commencement May 4-5. On Thursday evening, the Central Ceremony in the Quad allows the entire senior class to celebrate their achievement together by participating in the ceremonial class photo on the College Street steps and participating in the processional through MC’s iconic gates. The graduates will receive their degrees on Friday during three ceremonies, divided by schools, in the A.E. Wood Coliseum.

Bobo said many other activities scheduled throughout the spring demonstrate the depth and breadth of the campus experience at MC. For example, art exhibits at the Gore Galleries are not to be missed, while senior recitals for budding professional pianists, vocalists, and instrumentalists will showcase tremendous musical talent throughout the spring term.

“All of these productions demonstrate that MC is a multifaceted academic institution,” Bobo said. “We are musically inclined, artistically inclined, and athletically gifted, and we have a diverse amount of opportunities for members of the community to engage with MC, see what our students are doing, and participate in what we have to offer.”

To keep up with all upcoming events at Mississippi College, visit www.mc.edu.