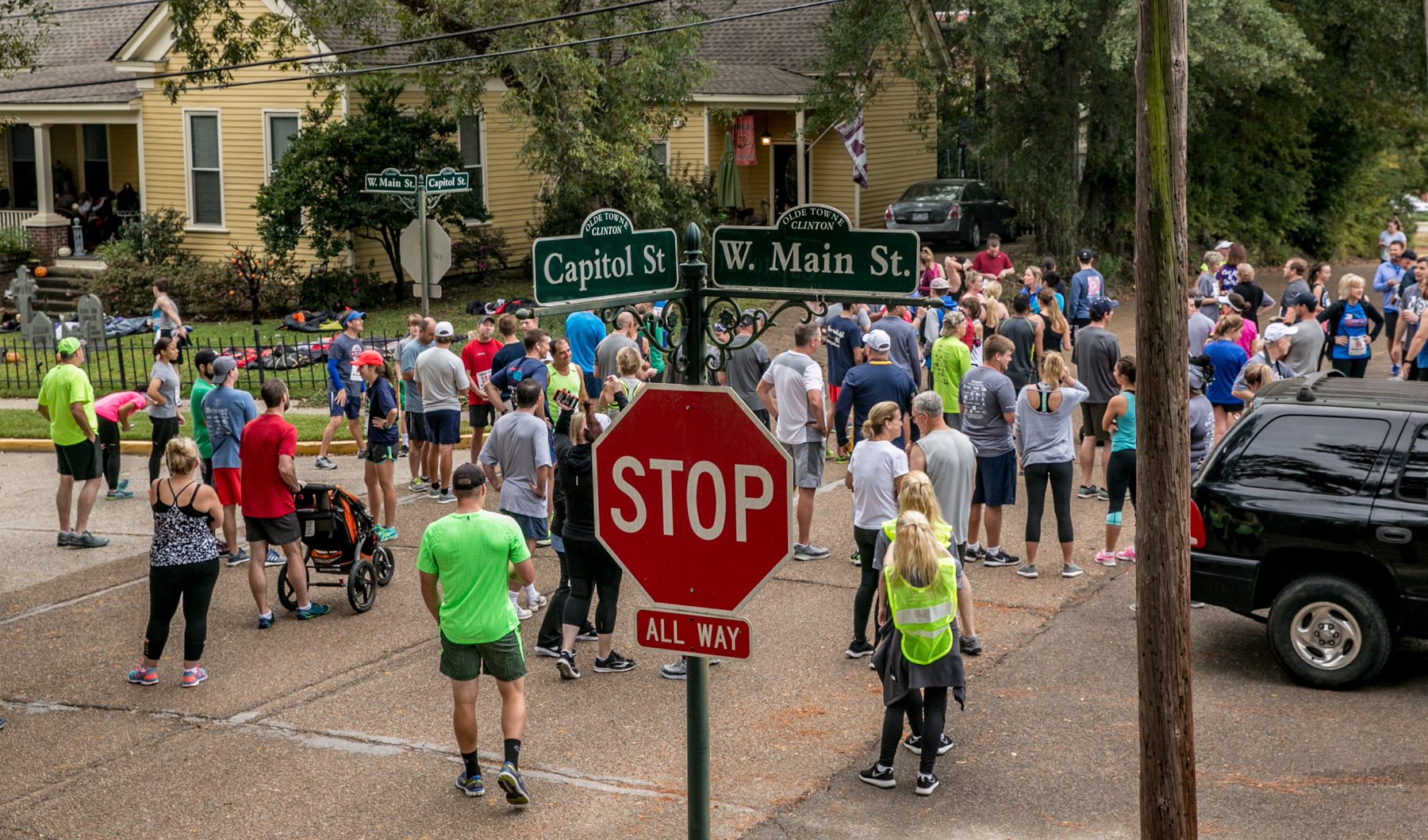 How could it not be for the energetic Mississippi College educator? The dean of the School of Education, Melton was among more than 130 runners at the 10th annual event.

A centerpiece of MC’s Homecoming festivities every October, the 5K race is a wonderful tribute to the beloved coach & teacher Hap Hudson of Clinton.

Cindy ran the course at her alma mater in a speedy 36 minutes and 23 seconds to finish in 2nd place in the women’s 45-49 age category.

Just being part of the Kinesiology Department’s road race on a crisp October 21 morning was really a big enough reward for all participants.

“It is not only a great way to honor Coach Hudson and encourage physical activities – it’s a great way to have fun with MC alumni, faculty and friends,” Melton said. “It was a very well-organized, fun race with many smiling faces, lots of great swag, and plenty of encouragers along the route.”

Beginning at Cockroft Hall, the race took runners through the Brick Streets of historic Clinton, the city’s neighborhoods and Mississippi College’s campus.

The course was designed for avid runners Anna Lauren Livingston. “I never ran competitively in school, but I have always enjoyed the challenge that running has provided,” said the enrollment specialist at MC’s Physician Assistant program. “I love that through running I can set a goal and work to accomplish it, whether it be 5K or a marathon.”

Lacing up her running shoes, and pounding the pavement with so many competitors proved to be pretty special for the Clinton resident. It also marked Anna’s first time as a Hap Hudson runner. “Running is my time in the morning when I can think, mediate and pray through life, but also build community with those I run with.”

Anna Livingston’s time of 24 minutes, 18 seconds was good enough to earn her 2nd place among the race’s female runners. Ashley Mason finished in first place with 21 minutes, 4 seconds, while Grace Pratt got third with 24 minutes, 49 seconds. Grace is the daughter of Eric Pratt, Mississippi College’s vice president for Christian Development.

On the men’s side, Ryan Crandall crossed the finish line first at 17 minutes, 2 seconds, Pratt Pratt got 2nd with 17 minutes, 39 seconds and Jody Ogletree finished 3rd at 19 minutes, 40 seconds.

A network support analyst at Mississippi College, Dan Lauing turned in a strong performance, too. He was No. 1 among the men in the 30-34 age category with a time of 21 minutes, 24 seconds.

“I run because it only takes a pair of shoes, I can do it anywhere, whether anyone shows up or no,” said the MC staff member. “It enables me to keep up with my three kids.”

Running, Dan added, “consistently beings me closer to God than any other day-today activity.”

For Clinton’s Tracey Harrison, it wasn’t the first Hap Hudson Road Race for the Mississippi College graduate. And it won’t be the last for MC’s public relations director. “I look forward to running the Hap Hudson race each year! It’s always a great time with alumni and friends.”

Race coordinator Suzanne McDonough called the event a tremendous success. The MC kinesiology professor thanked numerous volunteers for their splendid service. She applauded the many friends who cheered the runners in Clinton.

The race was quite memorable to Hap Hudson as well, Suzanne noted. “Hap was surprised by the quilt we made for him with T-shirts from the ten previous races.”