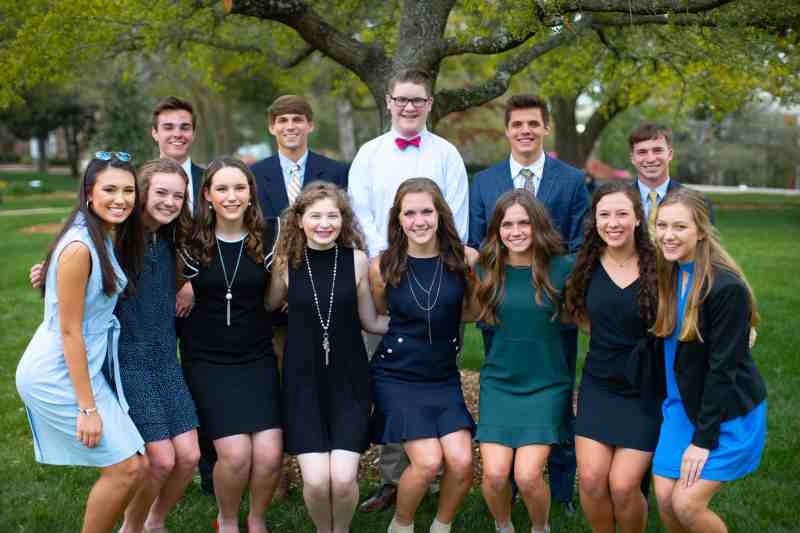 Erin Norcross will teach biology classes, while handling other important duties as director of the new Honors College on the Clinton campus.

“I’m extremely excited about this opportunity and what the new Honors College will mean for our students,” Norcross said.

“The vision of the Honors College at MC is to develop student leaders committed to academic excellence, spiritual maturity and civic engagement,” Norcross said.

She envisions students challenged with a unique interdisciplinary approach to their studies. The undergraduates will also participate in a diverse array of extracurricular activities. They will live in MC’s newest University Place residence halls.

Many of the first 14 incoming freshmen in the Honors College were introduced during inauguration ceremonies on the Quad. They come from Mississippi, Texas, Alabama, Tennessee and Louisiana. There are eight women and six men enrolling. More students will be selected in coming years.

Representing diverse academic disciplines, the students should impact each other and be leaders to future Honors College classes, Norcross said.

Thanks to a generous gift from Mississippi businessman J.L. Holloway, the Honors College was created. Every Honors College student receives a four-year scholarship covering all costs of an education at the Baptist-affiliated university starting with Fall classes.

A stellar professor and researcher, Norcross earned her bachelor’s degree in 2002 from Boston University. She received her master’s at Mississippi College in the field. The MC professor was awarded her doctorate in microbiology and immunology at the University of Mississippi Medical Center.

Growing up in Baton Rouge, Louisiana, Erin also lived in Iowa, Pennsylvania, Massachusetts and Virginia. Erin moved to Mississippi more than 15 years ago. Dr. Norcross serves as president of MC’s Faculty Senate. She wears many hats, but the Honors College remains a big priority.

Norcross and other professors will work closely with Honors College students from nearby communities and others far from campus. Mississippians include Clinton High senior Gracie Phillips, a singer/dancer with the nationally acclaimed Attache’ show choir. Others such as incoming freshman Brennan Moss come to Mississippi College from 270 miles away, in Longview, Texas.

Ally Fortenberry of Forest, (Raleigh High), Kaylee Foster of Ocean Springs High, Luke Sims of Hattiesburg (Oak Grove High) and Marion Pohl, of Bay St. Louis (Bay High) round out the Mississippians selected. Kaylee excelled in her classrooms on the Gulf Coast, but her feat on the football field received national media coverage.

Michael Wright, director of freshmen enrollment, believes the inaugural Honors College class represents “an incredible example of MC’s total commitment to academic excellence and the cause of Christ.”

Each student selected will be teamed with a career-specific mentor in his or her field. They can also take advantage of study abroad opportunities.

Going to Mississippi College free of charge sounds wonderful to students as well as their parents. “They will not have to pay a dime for their four years at MC,” Wright said.

With this first class admitted, Honors College leaders will recruit the next group of students who face a May 1, 2020 deadline to apply. The competition figures to be keen at Mississippi College.