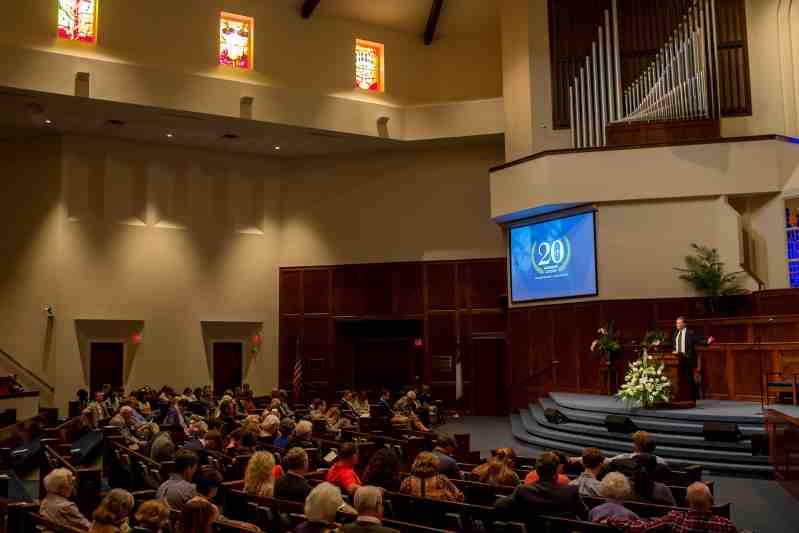 Mississippi College Singers delivered splendid performances, there was a powerful sermon preached, and time to pray for the Christian university led by President Blake Thompson.

MC’s 20thpresident, Dr. Thompson is being spotlighted at a series of milestone events for the 193-year-old Baptist-affiliated university.

“May you be an institution that lifts the cross high,” pastor Josh Manley said during his message. The pastor at Rak Evangelical Church of the United Arab Emirates presented an inspiring sermon well-received by his audience.

It marked quite a memorable occasion for Dr. Thompson, his wife, Jana, and their three children sitting in the church pews. In attendance were Dr. Thompson’s parents from Alcorn County. Special guests such as former U.S. Congressman Gregg Harper and Mississippi House Speaker Philip Gunn of Clinton were on hand along with faculty and staff.

On Tuesday, members of the MC community are invited to a Provine Chapel service at 10:50 a.m. featuring an address by President Thompson. That will be followed by student-led community service projects in Mississippi College’s hometown of Clinton and in Jackson. Projects from 1-4 p.m. touch on church planting, adoption, foster care and food insecurity.

Other key pieces of inauguration week include an academic symposium on Christian higher education at 3 p.m. March 28 in Swor Auditorium. A dinner and concert in Olde Towne Clinton will run from 5 p.m. until 9 p.m. that Thursday.

Friday’s notable events include the dedication of the “Christ in Gethsemane” sculpture crafted by internationally celebrated artist Sam Gore. The program begins at 10 a.m. at the Rhoda Royce Prayer Garden near Alumni Hall.

The inauguration ceremony for Dr. Thompson is set for 4 p.m. Friday on the historic Quad. There will be a community reception afterwards at the Piazza and Jennings Courtyard.

The public is invited to join the celebration for President Thompson.

The Rienzi, Mississippi native has led America’s 2ndoldest Baptist college since arriving July 1. Blake Thompson returned home to Mississippi after serving nine years as a vice president at The Ohio State University along with other leadership posts. He succeeded Dr. Lee Royce, who provided 16 years of extraordinary service before retiring in late June as MC’s 19thpresident.