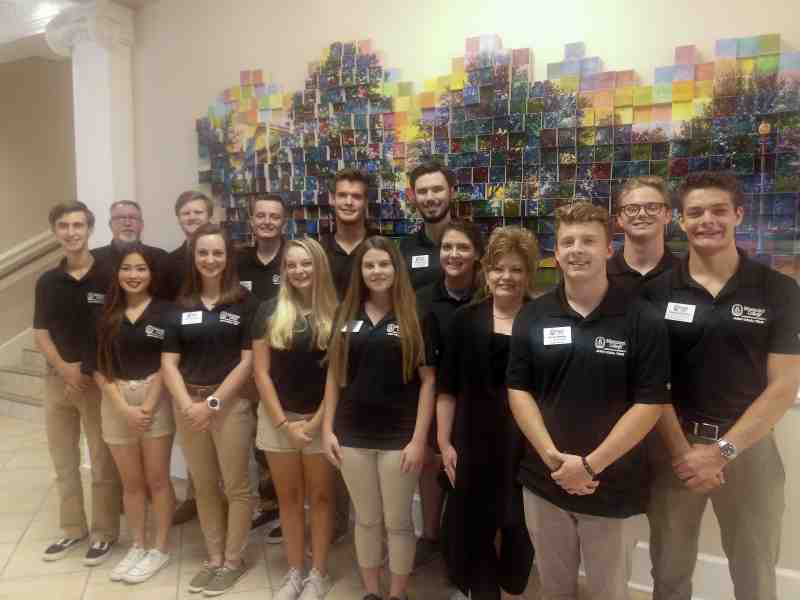 Mississippi College events staff was among more than 40 campus organizations featured at the university's first Involvement Fair on September 9.

Sophie also cherishes her time making new friends as one of nearly 50 tutors serving at the MC Writing Center. Last year, the center’s tutors assisted more than 2,300 students to enhance their writing skills and improve their study techniques.

The Writing Center is one of dozens of student organizations showcased at MC’s inaugural Involvement Fair on September 9.

“The point of this event is to showcase all of the opportunities a student could plug into over the next academic year,” says Jonathan Nutt, director of the Office of Student Engagement.

The two-hour event was held on the pedestrian street outside the university cafeteria. Leaders of sports teams, the Student Government Association, clubs, tribes, drama groups and others plugged their organizations. Students learned about campus jobs. There are more than 40 campus organizations, leadership groups and departments represented at the initial event.

There’s always room for one more creative news writer, an additional photographer or copy editor, at the Mississippi “Collegian.” Editor Kyle Hamrick is delighted to discuss what’s needed at the student newspaper in 2019-20.

Hamrick worked with the student paper last year and sees the rewards of being involved again, this time as the top editor.

“Being able to hear and tell their stories through words and pictures has allowed me to grow my understanding of not just the people here, but people everywhere,” says the Alabama resident. “MC is really a very unique place, and I love learning and sharing the stories of my people!”

Students who love to sing should consider joining the Choctaw Chorus. For students playing musical instruments – from the trumpet to the clarinet -the Mississippi College pep band seeks to strengthen its roster. Next Fall, the group expands to become a marching band at Choctaws football games.

Another viable avenue for students at the Involvement Fair is the MC Writing Center.

“We’re proud of our tutors and what they offer to the campus,” says director Steven Price, an MC English professor. “This fair gives us a chance to reach a large number of students.”

The Writing Center attracts student tutors from various disciplines. They include SGA President Aaron Feazelle. A finance major and MC Choctaws football player from Diamondhead, he seeks to become the CEO of his own company. Another tutor is English major Christine Anderson. She wants to become a novelist and pen a book on the “New York Times” Best Seller List.

There are many ways for students to step up their involvement at Mississippi College besides hitting the books. Communication professor Merle Ziegler seeks to attract more student debaters with sharp verbal skills to engage in competitions across the South. He’s the coach of the university’s debate team.