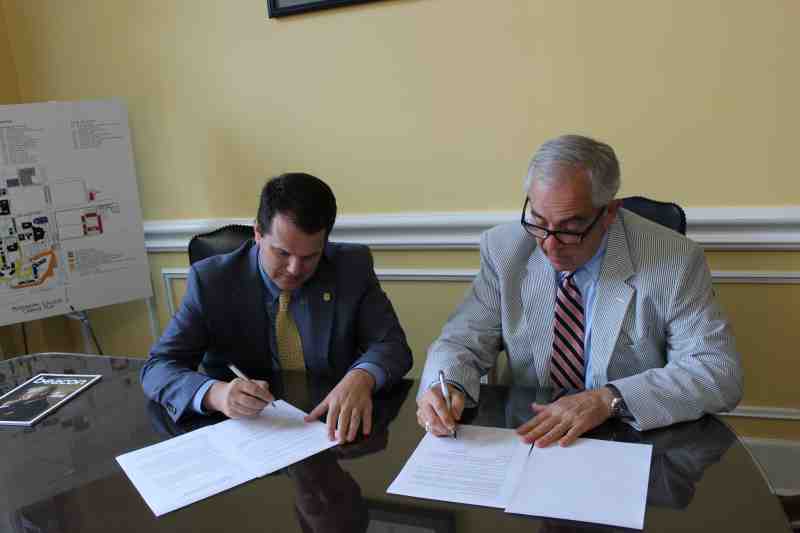 Jackson Academy and Mississippi College leaders signed an agreement to strengthen bonds between the two institutions.

In addition, Mississippi College faculty and staff sending their children to Jackson Academy will see prices reduced as well.

“We see this as a win-win for both institutions,” says Jim Turcotte, MC vice president for enrollment services and dean of students.

Jackson Academy and Mississippi College already have some notable things in common. A 1997 MC graduate, Jackson native Bryan Eubank serves as JA’s sports information director and the voice of the Raider Network. Eubank broke into the sports broadcasting business in 1998.

JA Raider athletics are pretty strong in football, basketball, baseball, soccer and other sports. Days ago, the JA Raiders opened the 2018 football season with a 31-0 win over the Washington School of Greenville. JA girls teams won six championships in 2017-18. Jackson Academy academic programs are solid, too.

Both leaders at MC and JA are relatively new. Dr. Thompson began his duties on July 1. Milne has led the school at 4908 Ridgewood Road in Jackson since January 1. He previously served as vice president and dean.

Founded in 1959, JA enrolls about 1,271 students, from pre-school through middle and upper schools.

Under the similar agreement with Clinton Christian Academy, CCA graduates become eligible to receive a 40 percent tuition reduction at MC. The students will be considered for discounts as long as they meet admission standards at the Baptist-affiliated university. At least two new CCA graduates are expected to enroll as MC freshmen in late August.

Mississippi College classes are set to begin on August 22.