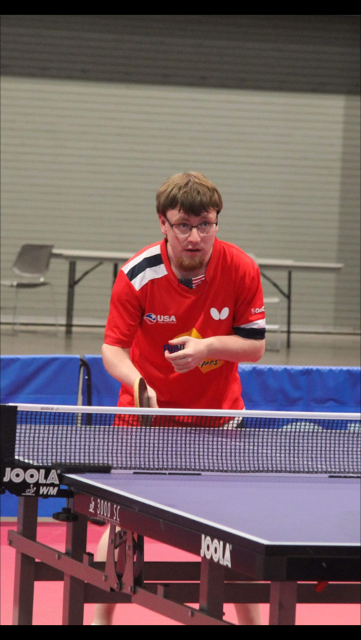 Jeremy Gore sharpened his game as he qualified for the USA Para table tennis program.

At the U.S. Para Open in Las Vegas, the Mississippi College junior played his favorite Olympic sport against athletes from Colombia, Canada, Great Britain and Japan.

“I got internationally qualified as a Class 8 athlete,” Gore says after he was notified last week. “The competition was very tough. I gained lots of experience.”

“I now have a better understanding of what the Para competition is like and what I need to work on in order to improve,” Gore said.

Para Olympic events for challenged athletes across the globe cover the gamut of sports. Whether it is para cycling or para table tennis, the games boost their confidence. The sports are a tremendous way for competitors to stay fit and forge new friendships.

A Mississippi College accounting major, Jeremy has Osteochondoma or the most common noncancerous bone growth. It is an overgrowth of cartilage and bone. Typically, it occurs at the end of the bone near the growth plate. It affects the range of motion in his wrists and how fast the MC junior moves his legs while playing table tennis.

During the Nevada tournament, Gore competed against such stellar players as Koyo Iwabuchi of Japan. He’s No. 9 in the world in his International Para Table Tennis men’s Class 9 ranking. Another Japanese player Nobuyuki Suzuki is ranked 14th in the world. The Japanese players won 2nd and third in the Class 9 singles, while Leibovitz finished first.

What’s next for Jeremy?

“I will continue to train and practice table tennis,” Gore said. He also will get ready for the upcoming MC table tennis season in late August.

At the 2018 national championships in Round Rock, Texas in April, Mississippi College’s table tennis team finished third. The Choctaws were edged out in the semi-finals by eventual champ New York University. MC begins its 12th season of table tennis with practices at Alumni Gym.

If time permits, Gore will pack his paddle for Para events in Costa Rica and the U.S. Open in Orlando.

Getting selected to the Para Team USA for the 2020 Olympics in Tokyo remains the ultimate dream for talented table tennis players. There are still plenty of hurdles on their journey to land a spot on the USA squad.