MC Alert: MC operations on the Clinton campus and at MC Law in Jackson will close at 3:30 p.m. on Tuesday, Nov. 29, in anticipation of severe weather. All classes at both the main campus and the law school beginning after 3:30 p.m. are canceled. Please monitor local conditions and stay weather aware.
Posted Wednesday, April 4, 2018 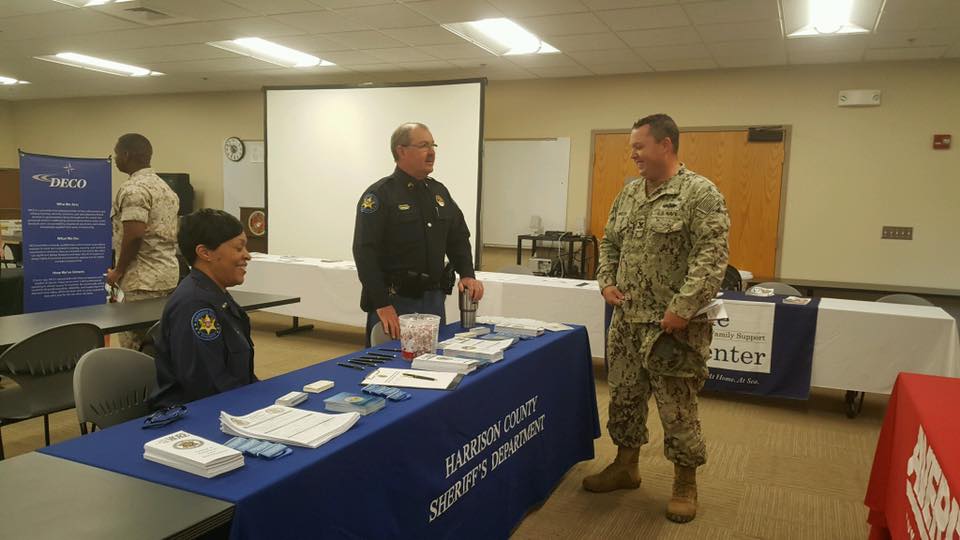 U.S. Customs and Border Protection, the FBI, the Mississippi Highway Patrol, DEA and other law enforcement agencies were well-represented.

Agency officials visited the Clinton campus on April 3 with applications, brochures and other information to recruit Mississippi College students.

“There are plenty of opportunities in law enforcement,” said Lt. Robert Lincoln of the Harrison County Sheriff’s Office in Gulfport. “And people are stepping up.”

Lincoln’s visit to the Clinton campus marked his 4th trip to the MC Homeland Security Career Day. There are many openings across the USA for men and women to take jobs to battle illegal drugs, protect American borders and make schools safer, he noted.

The MC Office of Career Services sponsored the annual event in Anderson Hall. Lt. Lincoln recently visited a job fair in Biloxi and found people lined up as future applicants.

New officers with U.S. Customs and Border Protection start at about $40,000 annually but see their paychecks rise to $110,000 after five years, officials say.

The huge federal agency is responsible for guarding nearly 7,000 miles of land border the United States shares with Canada and Mexico. Plus, there are nearly 2,000 miles of coastal waters surrounding the Florida peninsula and off the coast of Southern California.

The agency protects 95,000 miles of maritime border in partnership with the U.S. Coast Guard. Their workforce includes 21,000 CBP agents and 24,000 officers.

Earning degrees from Mississippi College or other institutions will make it easier for officers to move up career ranks, Lincoln said.

Officials with the DEA suggested that job-seeking MC students give their agency a try. The Drug Enforcement Administration’s special agents seek to investigate, disrupt and dismantle drug trafficking organizations. DEA requires its agents to possess at least a bachelor’s degree, with studies to include at least 24 semester hours in accounting or auditing.

The Office of Career Services will invite some of the same law enforcement leaders again in 2019 to recruit MC students. It’s a matter of them sizing up students looking for rewarding careers. Students also want to see if their agencies would be a good fit.

“People aren’t afraid” to join American law enforcement ranks, Lincoln said. “There is a lot of support” for men and women on the front lines fighting crime, he said.

“This is something we do every April,” Miller said of MC’s Homeland Security Career Day.