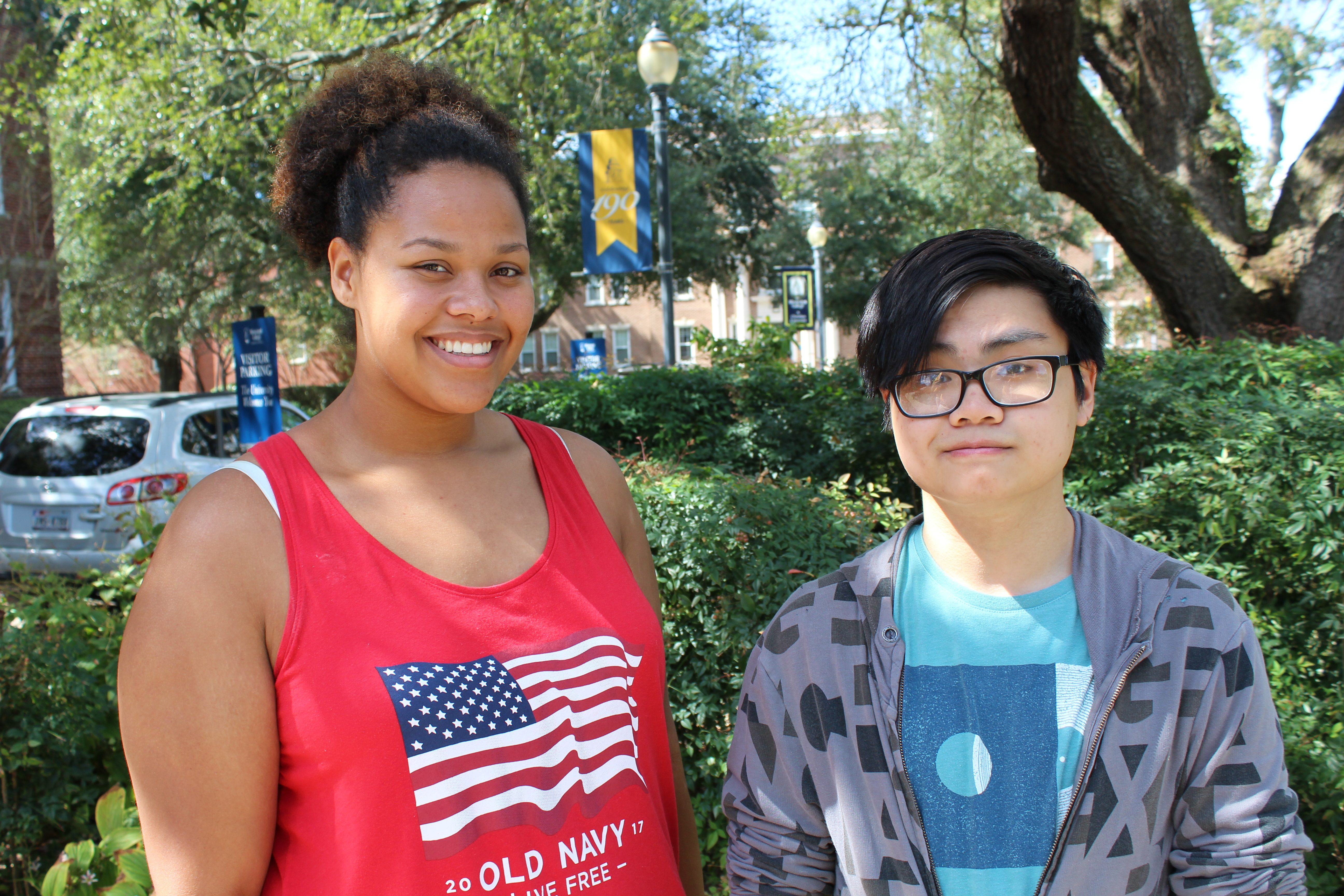 Mississippi College freshmen Gabby Howe and Nile Tran are pictured on the Clinton campus in early October. Both 18-year-old students are 2017 graduates of Long Beach High on the Mississippi Gulf Coast.

Three hours away from familiar Gulf Coast beaches, Gabby Howe and Nile Tran get homesick at times. But the 2017 Long Beach High graduates are making new friends, hitting the books and adjusting quite well as freshmen at Mississippi College.

It’s never an easy process as high school seniors live far from home, face academic challenges and encounter a sea of new faces. Parents are no longer around to offer daily guidance or serve home cooked meals. Teens are putting down roots in college dorms. Text exchanges with family members on cell phones are seldom the best way for college students to communicate.

This Fall, it’s a new life for the Long Beach High grads at the Baptist-affiliated university. The campus in Clinton sits 175 miles from their scenic Harrison County hometown of 15,000 residents.

“I’ve never been keen on change and this was the biggest one I’d ever been presented,” Tran, 18, said as MC’s Fall Break approached in early October. But he quickly felt comfortable with the landscape in Central Mississippi and connected with campus peers. “Now that a month has passed it feels like the place is my second home and the people are my second family.”

He’s focused on his studies. Nile is an interpersonal communication major with a minor in English. He envisions a media career and the opportunity to share ideas through speaking or writing.

Nile is the son of Gulf Coast parents, Be and Paul Tran, who are Vietnam natives. His grandparents worked in the shrimping industry that’s been a major enterprise for generations in South Mississippi.

How did the freshman discover Mississippi College? He attended a CentriKid church camp as a middle schooler on the Gulf Coast. The Mississippi teen liked what he saw of the Clinton campus and applied.

“I was looking for a college with a small student/teacher ratio (15:1), a relatively positive learning environment and an affordable price,” Tran said. “MC met all of my criteria.’’

“It is a great area for us,” says admissions counselor Tori Langworthy.

Her recruiting territory spans Pearl River, Hancock, Stone, Jackson, and Harrison counties. Over the next few weeks, she will visit area high schools and seek to attract more MC Choctaws.

Gabby Howe admits she still gets homesick. Her smiles and reveals her remedy: enjoying ice cream at a Sonic in Clinton, chatting with friends and calling her mom, Laura Howe.

The biology/pre-med major stays busy with her studies. So there’s little time for the 18-year-old to miss life in Long Beach. “College requires a lot more studying and getting A’s aren’t that easy anymore.”

What are things she cherishes about Mississippi College? “The friendships I have made are amazing,” Gabby says. “It’s great to be around people with common goals who want to build each other up.”

The freshman praises a Christ-centered university that welcomes people from the world’s different cultures. MC is home to 261 international students from 43 nations, led by China, India, Saudi Arabia, Nepal and Great Britain.

Gabby admires professors who often begin classes with a prayer. She’s active in a student leadership group. The group plans a November dance marathon to raise funds for Blair E Batson Children’s Hospital in Jackson. “It is showing me how to be a servant-leader in my community.”

A former Lady Bearcats basketball player, Gabby Howe should achieve her dreams, says her Long Beach hoops coach Jed Kanengiser. On the Maroon & White squad, Gabby “was dependable, worked hard and had a big heart,” Coach Kanengiser noted. “It was a joy having her on the team. No doubt she will succeed at anything she sets her mind on. Keep up the great work!”

Last season, Gabby Howe received the “Bearcat Award” for her accomplishments on and off the court. “Gabby was a good player, but a better person,” the Long Beach coach said.

As Fall turns to Winter, educators say the future looks bright for the pair of Mississippi College freshmen from Long Beach.