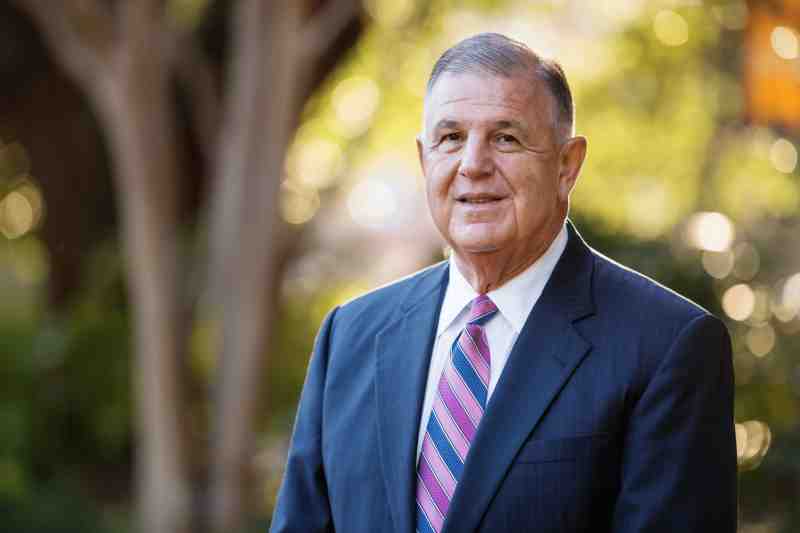 Coach Mike Jones, Mississippi College's 2021 Award of Service recipient, said he is blessed to be a part of the Christian University.

For someone whose name is almost synonymous with Mississippi College, receiving yet another award during Homecoming festivities might not seem extremely special.

That’s not at all how Coach Mike Jones ’75, ’77, who retired from the Christian University this year after a remarkable 33-year career as athletic director and head basketball coach, views the MC Award of Service.

Selected by members of the Mississippi College Alumni Board, the Award of Service recognizes alumni who have demonstrated extraordinary service to MC students. Recipients are best known by their love and support for MC students.

The name of the award itself bears special significance to Jones.

“I think God put us on the Earth to serve,” Jones said. “This being a service award, that means a great deal to me, because I always want to try to be a servant of His. You never meet the expectations He wants you to, but that’s what you try to do.

“Being recognized as the service award winner is such an honor, and I’m thankful the committee even considered me.”

Reviewing Jones’ contributions to the Christian University, it’s hard to imagine the Alumni Board considering anyone else for the honor.

A basketball standout at Mississippi College, Jones earned his bachelor’s and master’s degrees at MC, and as a graduate assistant coach, was responsible for scouting and recruiting. During 19 seasons as the Choctaws men’s head basketball coach, he posted a 342-127 overall record and led his team to four American Southwest Conference championships, one Gulf South Conference title, and three appearances in the NCAA Division III Tournament Sweet 16 round.

As athletic director, he helped MC athletics transition back into the Gulf South Conference and NCAA Division II after a successful tenure in NCAA Division III. His fundraising efforts through the years have led to enhanced facilities for virtually all of MC’s sports programs.

A three-time ASC Coach of the Year selection and a GSC West Division Coach of the Year, Jones guided numerous players onto All-Conference and All-Academic teams. He is a member of the Mississippi College Athletic Hall of Fame and the Mississippi Sports Hall of Fame, and the basketball court floor at A.E. Wood Coliseum bears his name. Jones remains involved at the University as a part-time fundraiser for MC athletics.

“Mike Jones is someone who is a household name with most of our alumni,” Turcotte said. “His years of service at Mississippi College are significant. His impact on student lives is immeasurable.

“And Mike Jones is no doubt a perfect candidate for this Award of Service.”

The Award of Service is the newest honor presented to exceptional alumni during Mississippi College’s Homecoming. Lloyd “Bo” Roberts, former dean of the MC School of Business who once served as interim president, was the first Award of Service selection in 2020.

Roberts and other outstanding alumni selected for Homecoming awards in 2020 will be recognized alongside Jones and other 2021 award recipients during the annual Homecoming Brunch from 11 a.m. to 12:30 p.m. Saturday, Oct. 30, in Anderson Hall on the second floor of the B.C. Rogers Student Center.

“To have my name mentioned in the same light as Bo Roberts is a tremendous honor,” Jones said. “He’s not only one of the smartest and nicest people I’ve been around, he’s also a mentor. It means a lot to me.”

While all of MC’s Homecomings have been special to Jones, he admits receiving the Award of Service will make the 2021 celebration a landmark occasion.

“They’ve all been special, because you’re able to reconnect with friends and talk about old times,” Jones said. “Being able to do that, seeing alumni come back, and receiving this award does make it a special time for me.

“I’ve always said, being at Mississippi College has done a lot more for Mike Jones than Mike Jones has done for Mississippi College. What I mean by that, MC has kept me around wonderful people who help you be accountable, people who are going to be with you in good and bad times. MC has just really been very good to me, and I’m thankful I’ve had the opportunity to work here as long as I did and I’m very blessed to be a part of it.”