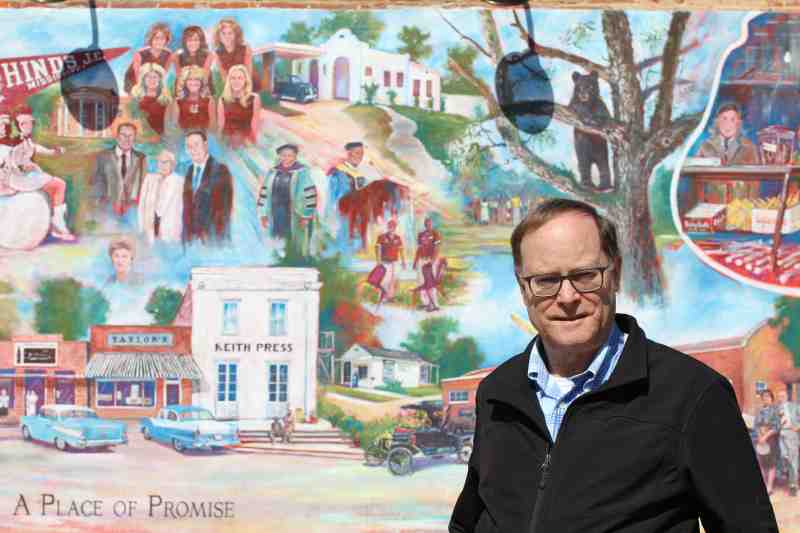 Mississippi College is well represented in Albert Smathers' mural in Raymond. Among the subjects he included are Dr. Laurie Lawson, associate professor, chair, and director of the Social Work program (in regalia near center of photo), Dr. Debbie Norris, associate professor and program coordinator in Higher Education Administration (back row, far right in group of cheerleaders at top of photo) , and Bebe Garrison, former director of the Accelerated Degree Program (front row, center in group of cheerleaders).

Albert Smathers’ critically acclaimed artwork reflects his deep appreciation for the virtues of community. It’s a value the graduate program coordinator in the Department of Art at Mississippi College enjoys instilling in his students.

His most recent masterpiece, completed earlier this month, is a celebration of the ties that bind residents of a small Mississippi town together and the relationships they have fostered while sharing the experiences of daily life.

Commissioned by the Friends of Raymond historic preservation society, “Raymond, Then and Now,” painted by Smathers on a freestanding wall next to the iconic Raymond Drug Store on Main Street, is one of almost 20 major murals the talented MC professor of art has completed.

The painstaking work of producing a mural – preparing the wall, sketching the original design, selecting the color palette, hauling equipment to the site, making revisions on the fly as events warrant – was not a niche he initially set out to carve out for himself.

“Murals kind of found me,” said Smathers, an expert in media and painting technique. “It’s not like I started out working under another artist on murals. And I don’t do them all the time – I mainly do landscape paintings.”

In fact, the first mural he completed – for the town of Terry in 1984 – no longer exists. Painted on the side of a drugstore, his work told the vegetable-packing town’s story for visitors making a quick stop on their way to the World’s Fair in New Orleans to admire.

“Painting murals is not for everybody,” Smathers said. “You need to know about drafting and scaling things up, and you’re at the mercy of the weather, sometimes you’re high above the ground, and you have to deal with the surface you’re painting on.

Among his many murals are a 4,000-square-foot painting of three waterfalls in Starkville, and “The Classics Are Never Out of Date,” a work exploring the special relationship between MC and Clinton that can still be seen on the exterior wall of Cook Pest Control in the Clinton Boulevard District. He invited five of his students to contribute to the piece.

“Raymond, Then and Now” is not the first historic mural Smathers has contributed to the town. In 1985, his large painting on the corner of Port Gibson Street and Main Street – a stone’s throw across a parking lot from his most recent work – centers on the Battle of Raymond, along with numerous historical buildings in the area, many of which are no longer standing.

The original mural was commissioned to help build interest in the Raymond Battlefield Walking Trail, a one-mile asphalt ribbon that encircles the site of a well-known Civil War battle. It became clear, however, that a new mural was needed to more accurately reflect the town’s theme: “A place of history, a place in the heart, and a place of promise.”

“We wanted to do a project that would raise the image of the whole community and celebrate the history of the community,” said Debbie Tillman, a Friends of Raymond member and project coordinator for the mural. “Albert was the perfect person for this job because he grew up in Raymond, he went to school here, and he knows a lot of people here.”

The new mural is designed to invoke memories of the town from about 1900 to the early 1970s, although anachronisms do exist: the current state flag of Mississippi, adopted in 2021, can be found alongside the American flag, while a window advertisement urges music lovers to purchase compact discs, first available for sale in the early 1980s. While these and other items from the turn of the century may have found their way into the piece, considering the tremendous scope of the 8-by-42¾-foot painting, it would have proven too restrictive to limit the entirety of the work to a specific time period.

After all, it’s the spirit of the mural that mattered most to Smathers, who attempted to capture the communal atmosphere that makes life in small-town Mississippi so special.

His work offers a panoramic tour of some of Raymond’s most beloved places. Starting with the old movie theatre, the mural lays a meandering path through the town, winding past the water tower and former train depot in the heart of Raymond to the former Western Auto store. Of course, Hinds Community College is included, as are the individuals and stories that have become legends in the community of about 2,000 people.

There’s the black bear that wandered into town in the 1960s and made himself at home, climbing a pecan tree to the dismay of local officials and the delight of schoolchildren who were let out of class early to witness the occasion. There’s Kansas Joe McCoy, a local guitarist who hit it big as a Delta Blues singer, musician, and songwriter, and whose recording of “When the Levee Breaks” was reworked into a monster hit for the rock band Led Zeppelin.

Vintage automobiles from the 1910s to the 1970s are seen parked on the town square, youngsters inspect the vast array of delights offered by the long-shuttered candy shop, and three Boy Scouts of America members give a proper salute while standing firm in their sharp uniforms. People of all ages, ethnicities, and walks of life – from the most affluent to the humblest – are represented in the attire they were best known for, from medical coats and formal dresses to farmer’s overalls and casual wear.

Mississippi College is well represented as well. In addition to the many residents of Raymond who enrolled at the Christian University, Dr. Laurie Lawson, associate professor, chair, and director of the Social Work program at MC – and one of the first African American women from Raymond to earn a Ph.D. – is depicted in her commencement regalia. Dr. Debbie Norris, an MC associate professor and program coordinator in Higher Education Administration, and Bebe Garrison, former director of the Accelerated Degree Program at MC, are included among six cheerleaders for Hinds CC.

The mural is chock full of “Easter Eggs,” too. The boy in a cowboy hat and chaps smiling from the back of a caboose pulling out of Raymond Station? It’s the late Hermon Adams, the brilliant western portrait artist from Prescott, Arizona, for whom Smathers worked and honed his craft after graduating from MC in 1980.

The pilot of a small B26 bomber flying overhead? None other than John Bell Williams, former Congressman and governor of Mississippi.

The little girl on a tricycle outside of Brent’s Grocery? It’s the market owner’s daughter, who, as a young girl, used to ride that trike all over town.

The young man holding a turkey? A well-known outdoors enthusiast in the area who died in a vehicle accident several years ago.

Astute observers of the piece can also find three former presidents of Hinds Community College, the place where the town installed its first safe (hint: it wasn’t in a bank), a poster touting a movie starring the King of Rock and Roll, and many other interesting items and people.

What Smathers estimated to be an eight-week project took a little more than four months to complete. As he painted, residents would come up to him, share their stories, and give unsolicited critiques of the work in progress.

“I was encouraged almost every day by people telling me what they enjoyed,” he said. “I wanted to make sure they got a good feeling back from the mural. Their stories meant a lot to me, too.”

Some of them even made it into the mural. A woman would walk her dog past the worksite almost every day and check in on Smathers. She – and her dog – can be found in the painting.

“It’s so much fun to have people come by and talk with you and share their stories with you while you work,” he said. “It’s apparent the love these people have for those who have gone on. You can tell they’re not just proud of where they live, but they love each other.”

Smathers has taken his art students at MC to see the mural, and has shared what it takes to produce such a large painting. He has trained them on the fundamentals of art – to recognize perspective, to know how to draw figures, to practice their portraiture. Some of them have even been inspired to begin painting murals in people’s homes.

“We try to give our students a good, strong training in the basics of art, so they can go out and make something,” he said. “Some of my students are more talented than me. I try to instill in them that painting murals is a marathon, not a sprint – you just have to keep going.

“It’s a real privilege, not only to teach, but to make art, to affect your community in a positive way. For any artist, it’s the making of a piece that means the most. That’s probably what keeps me going. The Lord has been looking out for me all along. He’s opened a lot of doors for me, and I’ve had to work really hard to get through them.”

There’s just so much to see in Smathers’ mural, which is why Friends of Raymond will soon post a legend on its website. Meanwhile, members of the Friends of Raymond Board of Directors are busy planning a formal dedication of the mural in late April or early May.

“We’ll block off the street, we’ll have Blues music, we’ll have food, we’ll have speeches, we’ll have the national anthem,” Tillman said. “Everybody in town will be invited. It will be a great event.”

It sounds like a fitting tribute for a work of art that, Smathers concedes, is ultimately ephemeral.

“I tell people, we’ll enjoy it for a while, but it’s temporary,” he said. “But what we believe in goes on. The people of Raymond believe in a strong community, family, their connection to history, and the love between them. I hope this (mural) will help put those images in their minds, and that will live on longer than the mural itself – their memories.

“I hope it will look pretty good for a while. But our faith is really what lives on.”

For more information about the “Raymond, Then and Now” mural, visit friendsofraymond.org/mural-of-raymond/.