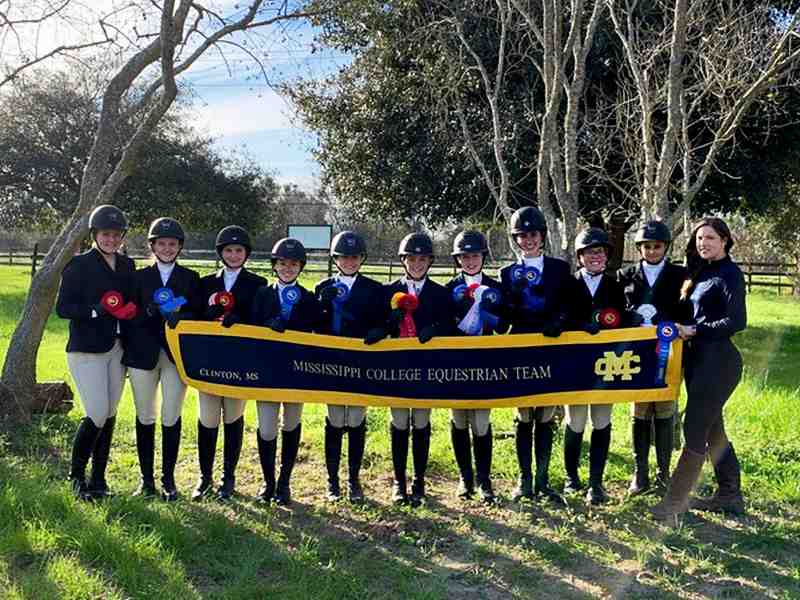 Knotted up against University of Texas and Louisiana State University, MC riders excelled on day two of the competition at Rice University in early February.

Up next: Mississippi College Lady Choctaws saddle up against Texas State University of San Marcos February 15-16.

Among MC riders with outstanding day one performances at Rice University were Grayson Manasco of Fairhope, Alabama. Grayson finished first in the intermediate division for over the fences and 2nd in over the flat.

On day two, Grayson Manasco finished 1st in over the fences in the intermediate division. And she earned 2nd place ribbons on the flat.

Also on day two in the Lone Star State: Macy Urbanosky of North Richland Hills, Texas finished 2nd on the flat and third in over the fences in the open division. In the novice division, Miriam Berry of Brookhaven and her horse galloped to first on the flat.

“They had a great weekend as a team and as individuals,” says Ann Skogerboe, the Mississippi College equestrian program director.

Skogerboe announced that MC equestrian team member Leslie Ann Fleming of Canton qualified for the  Spring 2020 Intercollegiate Horse Show Association regionals in the walk/trot horse division. Macy Urbanosky qualified in two categories for regionals in the intermediate division - over the fences as well as on the flat.

In their 13th season, the Blue & Gold competes with 14 riders in a strong collegiate division spanning Mississippi, Louisiana and Texas. MC’s team is based at Providence Hill Farm.