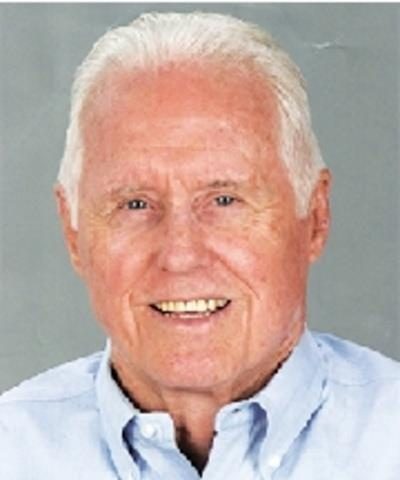 A member of the MC Sports Hall of Fame, Murphy died in the Dallas area on January 7 after a long illness. He was 91.

Murphy’s coaching philosophy was relatively simple in the 1950s. “It was guts and grit – just hard work,” says former Choctaws linebacker and running back Robert Dottley.

A retired pastor in Olive Branch, Dottley, 87, last spoke to Murphy by phone just days before his former coach passed away in early 2021.

Taking the coaching reins at age 24, the 1953 MC graduate made sure his players stayed in tip-top shape. After all, he was an outstanding hurdler on the MC track team and a football standout.

Inducted into the MC Sports Hall of Fame in 1992, Coach Murphy insisted that Choctaws football players stay in condition year-round. That dominated his head coaching days from preseason practices through Blue & Gold football games in the fall. “We ran up and down the hills,” Dottley said. It was just part of the landscape for Murphy’s players, including some military veterans returning from Korean War combat.

For decades, MC players traveled to Mexico to face teams south of the border. The contests remained highlights of the football eras for both Stanley Robinson and Joe Murphy. The series with Mexico was launched in 1929. The international series included games in Jackson. The series ended in 1975 with MC winning by a lopsided 83-0 score in Clinton.

Joe was reared in Vicksburg and later graduated from Hollandale High School. After graduating from Mississippi College, he earned a master’s from the University of Mississippi. After one year serving as head coach in all sports at Inverness High, he returned to his alma mater in Clinton. Athletic Director Stanley Robinson selected Joe to serve as the new Choctaws coach. Robinson was a “man of character,’’ recalled former Choctaws football player Sam Anderson. And he wanted the same type of person to succeed him, says Anderson, a successful California businessman.

After coaching for six years at MC, Joe served 35 years as a general agent with Fidelity Union Life. He also participated in senior athletic competitions in track and field, winning two World Championships in high hurdles and was named an All American in Masters Track.

During the Korean War, Joe Murphy served in the United States Marine Corps and later moved his family to Texas. His career as a coach was far from finished. He served as head track coach, winning two conference championships, and was an assistant football coach at Paul Quinn College. Located in Dallas, it is the oldest historically black college west of the Mississippi River.

Survivors include his wife, Jean Oakes Murphy. The couple was married for 69 years. The couple had three children: Joseph, Jr., Connie, and George. Coach Murphy was preceded in death by his children.

Other survivors include his granddaughter Melissa Roberson Shipp and husband Scott Shipp, great-grandchildren Cooper Kelly Shipp and Addison Grace Shipp, and one sister, Patricia Foster. A graveside service will be held at 1 p.m. January 14 at the Garden of Acacia at Hillcrest Memorial Park in Dallas. The Sparkman-Hillcrest Funeral Home is in charge of arrangements.

Words of comfort going to the family may be shared at www.sparkman-hillcrest.com. Memorials may be made to Mississippi College, Box 4005, Clinton, Mississippi 39058.