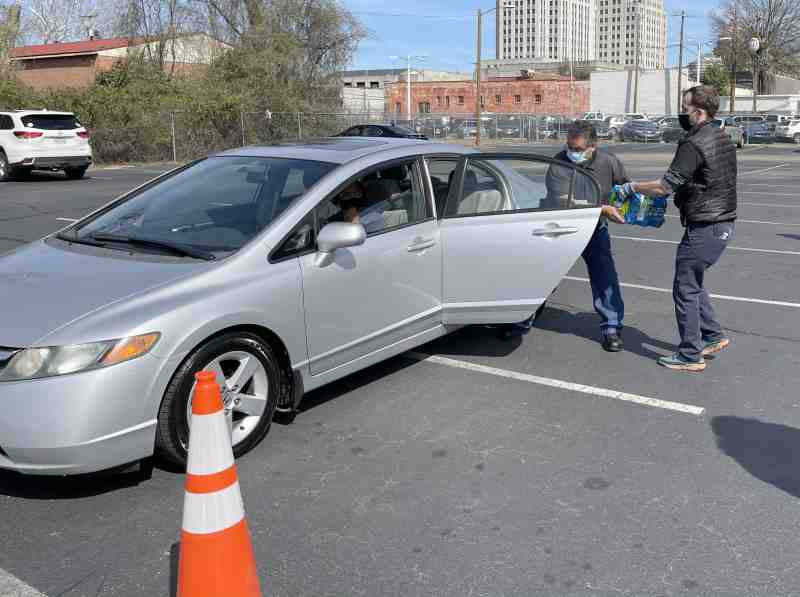 With many Jacksonians still without water or required to boil it, Mississippi College Law’s family helped respond to the city’s crisis.

It’s part of an outpouring of support for Jackson residents from cities like Memphis, New Orleans, Birmingham, Washington, D.C., and New York as the water crisis here extends beyond three weeks.

Jeffrey Land, a Memphis-based attorney, organized members of the Leo Bearman, Sr. American Inn of Courts – a group of lawyers, judges, and other legal professionals to team up to bring 1,900 cases of bottled water to Mississippi’s capital city. Supporters brought two truckloads to the capital city.

The bottled water was transported to the Charles Clark American Inn of Courts in Jackson. And MC Law became a distribution center for thousands of residents needing help. MC Law hosts the organization’s Jackson branch.

“This has been all hands on deck,” Banks told a WLBT-TV 3 reporter today. “We appreciate all the help.”

During a news conference Friday, Jackson Public Works Director Charles Williams said pressure at the plant was making progress. Only portions of south Jackson were without service, he said.

One Jackson resident, Eddie Staten, pushed a grocery cart nearly a mile to the MC School of Law to pick up clean water on Sunday, “The Clarion-Ledger” reported. Jackson’s water issues have received national attention on ABC’s “Good Morning America” and other news programs on TV networks.

There was water being transported into Jackson by officials with the NBA’s New Orleans Pelicans basketball team as well.

With the water crisis ongoing and approaching the fourth week, MC Law Dean Patricia Bennett urged students, faculty, and staff to assist with the distribution. “I sincerely appreciate any assistance and amount of time that you can give,” Bennett wrote in an email to MC Law stakeholders on Friday.

It was short notice, but the American Inns of Court Leo Berman Chapter of Memphis and the Charles Clark Chapter in Jackson came through with shipments of bottled water for needy residents.

“The need for water is now, and there is no need to delay their offer of generosity and kindness,” Bennett said. “We need your help.”

Other water distribution outlets were operating Monday, including the Metrocenter Mall, in Jackson.

Leaders of World Central Kitchen in Washington played a role by bringing meals to the capital city during the water emergency. Jackson Mayor Antar Chokwe Lumumba has reached out to Gov. Tate Reeves to help secure nearly $47 million to help shore up the city’s aging, dilapidated water system. Some of the city’s broken water pipes were estimated to be more than 100 years old. The mayor estimated that actual needs to address Jackson’s ailing infrastructure approach $2 billion.