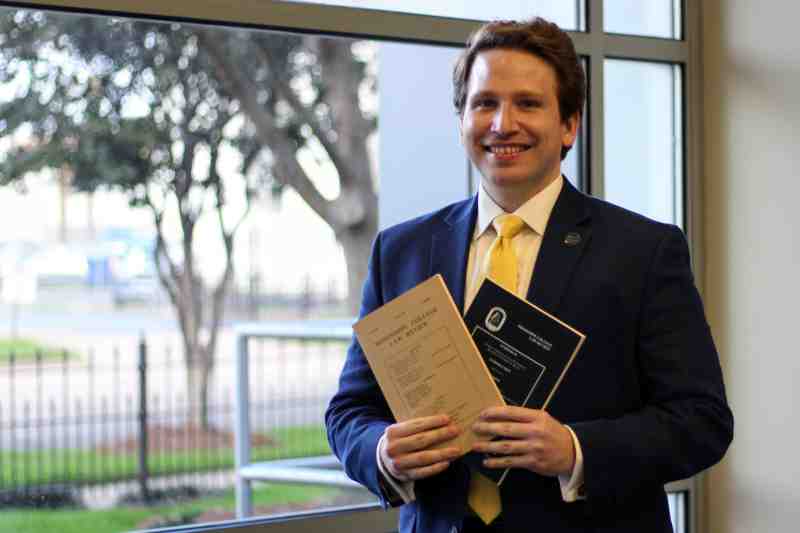 It’s a marathon effort as he oversees the work of 40 MC Law classmates. The publication’s Volume 39 rolls off the presses in spring 2021.

“I am often up at all hours of the day and night, sending follow-up emails, organizing assignments, and proofreading articles. Luckily, we have the entire calendar year to publish each volume.”

MC Law Review ideas originate with professors, lawyers, and students. An attorney suggested a tribute edition to federal Judge Sharion Aycock, and that project is now in the works. An MC Law graduate, Aycock serves as the chief U.S. District Court judge of Northern Mississippi. In 2007, the Tupelo native made history as Mississippi’s first female federal district judge.

A member of the Class of 2021, James “Bud” Sheppard brings personal ties to his work with the law review. He met his girlfriend of two years, Brianna Bailey, at MC Law. And the May 2020 graduate served as an executive editor on the “Law Review” staff. “The first exchange we ever had was me congratulating her on making the Law Review!”

Raised in Jackson, Sheppard earned a business degree at Loyola University, where he was elected student body president and served as chief justice. MC Law proved appealing because of incredible opportunities in the capital city, just blocks from the State Capitol.

Internships with former Mississippi Court of Appeals Judge Cory Wilson (now of the U.S. 5th Circuit) and State Treasurer David McRae came his way. His election as law review editor by his peers followed after working on the staff for two years.

MC Law professor Donald Campbell is the publication’s advisor. “I have the honor of watching these extremely bright and creative students find new ways to make the law review better every year.’’

Students involved with the journal rank at the top of their class. “Apart from academics, what MC Law Review excels at is camaraderie,” Campbell said. “I believe the friendships forged and the skills learned as a member of the law review are important to success after members graduate and move into professional careers.”

Each year, the “MC Law Review” staff invites students to a legal symposium. This year, the focus was timely: the opioid crisis. The event was conducted virtually due to the COVID-19 pandemic.

What will appear in the law review’s Volume 39? It consists of three issues comprised of at least five scholarly articles. The first issue spotlighted the symposium.

All past publications are available to readers electronically on Westlaw or LexisNexis.

“He is a consensus builder and motivator with a lot of enthusiasm,” Bennett says. “He knows how to get his team involved and get things accomplished. Bud is the best student organizer that I have worked with at MC Law.”

The dean salutes all of the contributors. “We are proud of our Law Review and the students’ commitment to it.”

Professor Matt Steffey sees enormous benefits for students. “The law review provides students with an experience that hones their writing, deepens their research skills, and expands their knowledge of current legal issues.”

What’s next for Bud Sheppard?

A former St. Andrew’s Episcopal School student on track to become his family’s first lawyer, Bud has definite goals in mind. “I hope my law degree will help me effectuate progress in our great state through legislation and leadership. I love our Hospitality State.” Giving back to the community is high on his priority list.

His late father, businessman, and philanthropist J.E. “Buddy” Sheppard passed away when Bud was just four. His late mother, Patricia Hall Sheppard, died in 2015 of pancreatic cancer. His mother strongly encouraged Bud and his sister, Victoria, to get a solid education. His mom always said, “they can never take it away from you.”