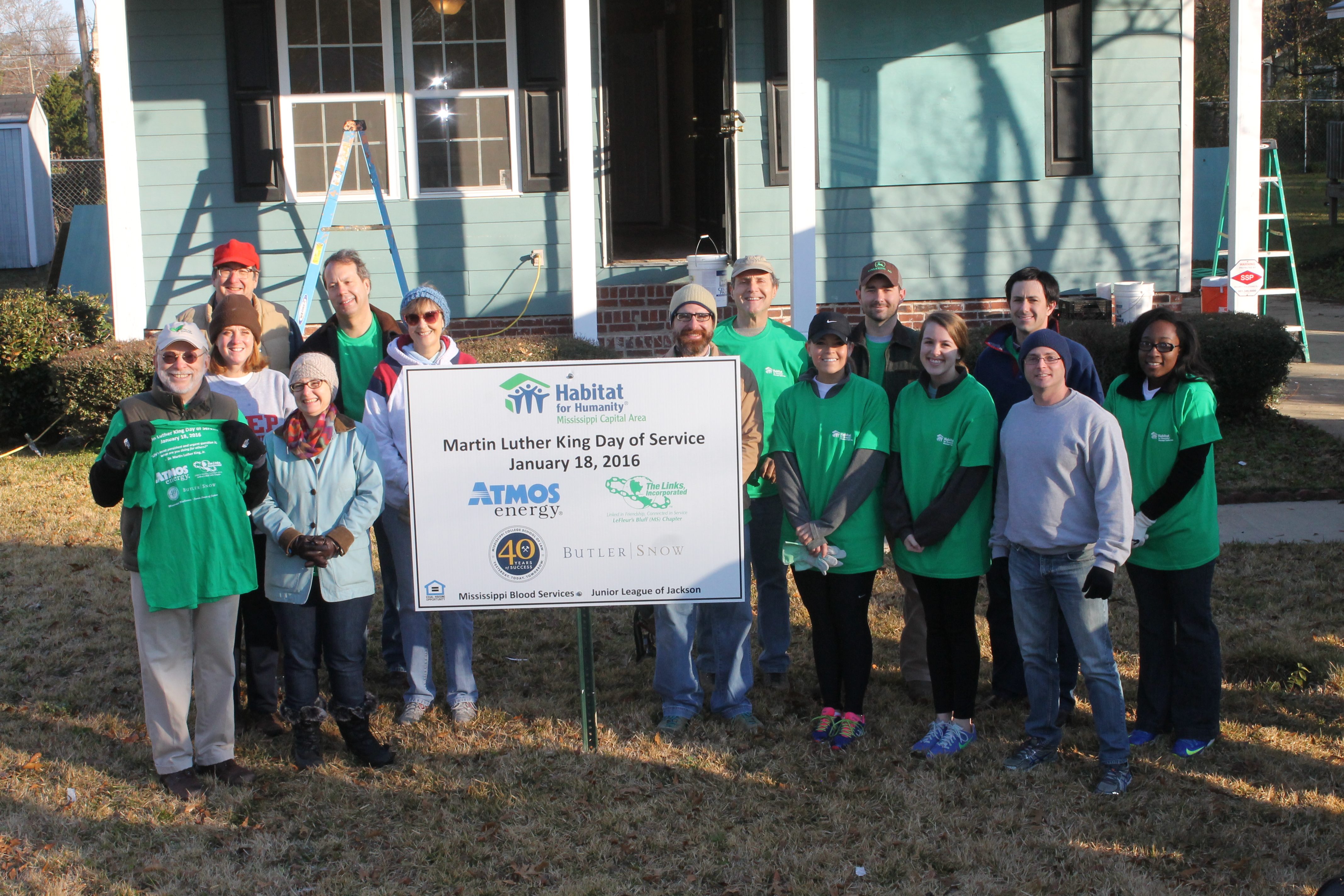 MC Law students join Butler Snow employees for a photo at the Habitat site in Jackson on MLK Day.

Constructing Habitat homes remains one of the cornerstones of the Mississippi College School of Law in Jackson.

MC Law volunteers showed their commitment by partnering with the Butler Snow law firm on a Habitat project on January 18. It was a day focused on service across the USA as the nation celebrated the birthday of slain civil rights leader Martin Luther King Jr.

Volunteering at the Habitat work site on Dr. King’s birthday is a reflection of “God wanting us to carry out His will in our daily lives,” says MC Law student Ryan Wolf of Shreveport, Louisiana.

MC Law Dean Wendy Scott appreciates the strong showing once again on Monday by students, faculty and staff to serve others. “Service is part of the DNA of MC Law School.”

Enrolling more than 400 students, MC Law reaches out to others by providing free legal services at Mission First to low and moderate income clients in the capital city. Students join faculty and staff volunteering at Habitat, Stewpot and other local organizations from January through December.

“Our service brings glory to God and hope to those in need,” Scott said.

“The MC School of Law and Butler Snow law firm embrace the ideal that a day of service embodies the essence of Dr. Martin Luther King’s dream by helping a brother and sister in need,” says Cindy Griffin, executive director of the Habitat for Humanity Mississippi Capital Area.

“The greatest satisfaction from volunteering with Habitat is that you are transforming lives and changing neighborhoods – building homes and building hope,” Griffin said.

On the MLK holiday, there were three Jackson homes extensively rehabilitated. One of the projects will benefit Maxine Thompson, 48, and Sammie Bass, 56, a married couple with two daughters and two grandchildren living with them.

For years, the family lived in a three bedroom/one bathroom older home with no running hot water in the kitchen and various foundation concerns. On rainy days, water leaks from the ceiling. From plumbing issues to electrical flaws, problems were numerous and the Mississippi family voiced safety concerns.

A four-bedroom, two-bath Habitat house located on Kevin Garnett Court (named for the NBA hoops star) will become the new residence for the six-member family. They will also be its new owners. The homes in Jackson were originally built for Hurricane Katrina evacuees a decade ago.

Maxine Thompson, an employee at Scott’s Miracle Gro, appreciates the outpouring of help from volunteers. “We are so grateful to everyone making this possible.”

On Monday morning, more than 80 volunteers from MC Law, Butler Snow, and other sponsors, including Atmos and the LeFleur’s Bluff chapter of The Links, went to work. By noon, they finished renovating three Habitat homes on Kevin Garnett Court for needy families.

A December MC Law graduate, Ira Rushing was happy to pitch in. “I thought it would be great way to help people and give back to the community,” he said. “Also, it’s good therapy for studying for the bar exam!”

The latest projects add to more than 600 home builds in metro Jackson since 1986 by Habitat for Humanity Capital Area volunteers.

For more information, contact Habitat offices in Jackson at 601-353-6060 or go to www.habitatmca.org