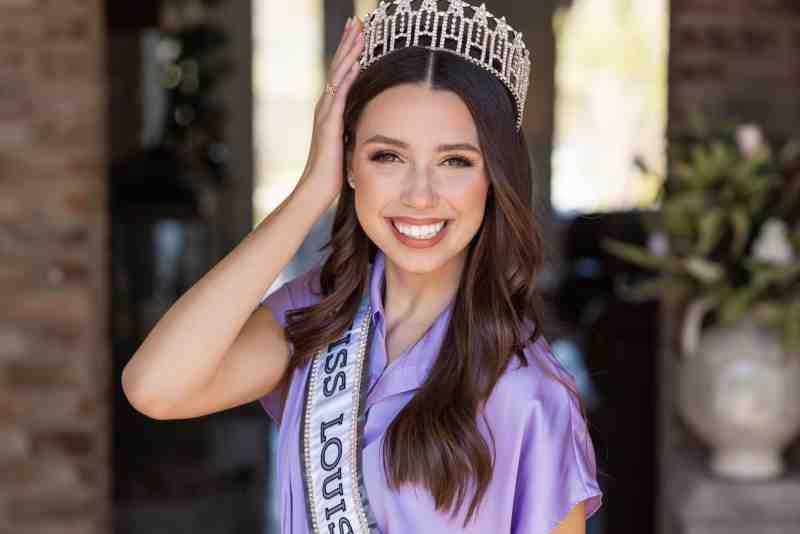 KT Scannell, a senior biology major at Mississippi College, will compete in the 2022 Miss USA pageant as Miss Louisiana USA.

It has been more than half a century since a Mississippi College pageant contestant has competed on a national stage.

For KT Scannell of Denham Springs, Louisiana, it was well past time to end that streak.

The senior biology major and Laguna Social Tribe member was crowned Miss Louisiana USA during the statewide pageant Feb. 20 at the Lafon Arts Center in Luling, Louisiana. She competed against 25 other highly skilled contestants to capture the title.

“I believe every woman did a great job, and I am honored to be crowned out of this group of women,” Scannell said. “I am so honored to be Miss Louisiana USA and to represent my state in the Miss USA pageant, and hopefully bring a national title home.”

She will compete in the 71st Miss USA Pageant later this year and follow the trail blazed by Joan Meyers of Forest, who was named Miss Mississippi College in 1967, earned the title of Miss Mississippi later that year, and finished first runner-up in the 1968 Miss America Pageant.

Not long ago, Scannell gazed at the black-and-white photo of a beaming Meyers displayed in a trophy case on the first floor of Nelson Hall and wondered aloud whether she might be blessed with similar success in the Miss Louisiana USA Pageant.

“I chose to come to Mississippi College because of the Christian environment and the traditions that are upheld here,” Scannell said. “I’m proud to add my Miss Louisiana USA title to that legacy, and I hope I make the MC community proud.”

Her fellow Ladies of Laguna maintain that Scannell has what it takes to become the first MC student to capture a national beauty title. Sarah Riser, a sophomore public relations major from Hurley, points to the strength of Scannell’s character as evidence she is well worthy of being crowned Miss USA.

“KT exhibits many qualities of character that have enabled her to earn the title of Miss Louisiana USA, such as elegance, optimism, faithfulness, and persistence,” Riser said. “Most notably, I believe her humility has carried her to where she is today.

“The Ladies of Laguna believe that we discover our personality through the diversity in our sisterhood. KT embodies this truth in the way she has pursued this journey. We are so proud of the way she has represented us and has brought our motto to life.”

When her name was called as the pageant winner, the Laguna members who had gathered in Scannell’s campus apartment for a ‘watch party’ that Sunday night let out a combined shout of joy that could be heard well outside the building.

“We were all on our feet, cheering at the top of our lungs,” said Jennifer Phillips, a junior business administration major from Clinton and Scannell’s “Big Sister” in Laguna. “I have seen her give the tribe so much joy since she joined. She is constantly glowing with her bright, big smile, and is always ready to pour out to others.

“KT is a wonderful leader. She presents herself with the utmost class and kindness. You could tell KT was different from how she stood, walked, and spoke on stage. Whether on stage or walking down a sidewalk, KT is someone you always admire.”

For a transfer student who first came to MC in the midst of a worldwide pandemic unsure of just how she might fit in on the Clinton campus, Scannell’s popularity is a testament to her personality.

“I was worried I might come here and get a degree and leave without making any friends,” Scannell said. “I was completely wrong. I’ve made friendships that will last a lifetime.

“The night I won the pageant, I received a video from the girls who had been watching from my apartment, and I shared it with the other contestants at the pageant. They were in awe. It was a true testament to the loving environment and the friendships that can be created at MC.”

Scannell has been a mainstay in Miss Louisiana Teen USA competitions, being named first runner-up in 2015 and 2016 and second runner-up in 2017 and 2018. She was named Miss Congeniality in the Teen Division in 2018. On June 20, 2021, her hard work paid off when she was crowned Miss Lafayette USA, the town she represented in the Miss Louisiana USA 2022 pageant.

“It has been quite the journey,” she said. “I like to say the Lord was preparing me for this, that he was keeping me throughout those earlier defeats and preparing me for something much greater.”

The Miss Louisiana USA pageant consisted of interviews with judges, fitness wear and evening gown competitions, and an on-stage question-and-answer segment. The question Scannell fielded? “This is the last generation born before the obsession began with social media. What changes would you like to see in young women’s use of social media in the next generation?”

“The question was unprompted, so you have to think on your toes,” Scannell said. “I told them I would love to see young women set appropriate boundaries with social media in their lives, whether it’s how affected they are by it or what they share on it. We share so much of our lives on social media, and I would love to be an example as Miss Louisiana USA.”

She set an example of how to perform under the intense spotlight of a statewide viewing audience by holding fast to one thought that gave her peace throughout the night.

“I had the mindset of understanding that God has given me these talents, but has already crowned me in righteousness and glory,” she said. “No matter the results, I was going to come home to family and friends who love me, no matter what.

“I went into the pageant knowing they’d be proud, and that made it more exciting to compete and share my success with them.”

She described her achievement of being named Miss Louisiana 2022 as a “mountaintop experience.”

“There were many valleys before it,” she said, “but this is one of the highs in my life. I want to encourage people that, if they have a dream or a goal in life and feel like they may never achieve it, that it seems far-fetched, they can do it if they leave it to the Lord.

“He knows the desires of your heart and will have a plan for the best outcome for your life, even though it may not seem to be what you thought it would look like at first.”

Capturing the Miss Louisiana USA title won’t interfere with Scannell’s immediate plans. She is set to graduate from MC in May, and expects to enroll in chiropractic school once her reign as Miss Louisiana USA – or Miss USA or, perhaps, Miss Universe – finally comes to an end.

As a byproduct of her achievement, Scannell understands she will be making plenty of appearances throughout the Bayou State. As the reigning Miss Louisiana USA, she is passionate about growing her initiative, Pollination Letter of Encouragement.

Some time ago, while helping to settle the personal estate of an older woman for whom she had served as a caregiver, Scannell discovered a bag filled with letters written to the lady while she was in intensive care. That gave Scannell the idea to pen letters of encouragement to people in need – many of whom she had never met.

Throughout the COVID-19 pandemic, Scannell reached hundreds of people with her letters and started soliciting her friends to do the same. Pollination Letter of Encouragement was born.

Scannell said her elderly friend “was the kindest, most uplifting person I’d known in my whole life. To extend her legacy, knowing she is smiling down on this effort, is such an honor. I’m looking forward to finding ways for other people to participate and grow that legacy.”

Although details about the 2022 Miss USA Pageant have yet to be determined, Scannell has already begun preparing for the competition.

“Every day with the title of Miss Louisiana USA is vital,” she said. “This is something I’ve dreamed of for a long time. I don’t want to let one day slip away without honoring that in my life.

“Every day, I will be giving this title the due diligence it deserves.”

Meanwhile, her fans can track her progress to the Miss USA pageant and beyond on Instagram @misslausa, on TikTok, and on Facebook at misslouisianausa.

You can bet her Laguna sisters will be among her most ardent supporters.

“KT is a huge encouragement to all those around her,” Phillips said. “She motivates us all to be devoted to all that we do, just as she has done within her college career and pageant career.”