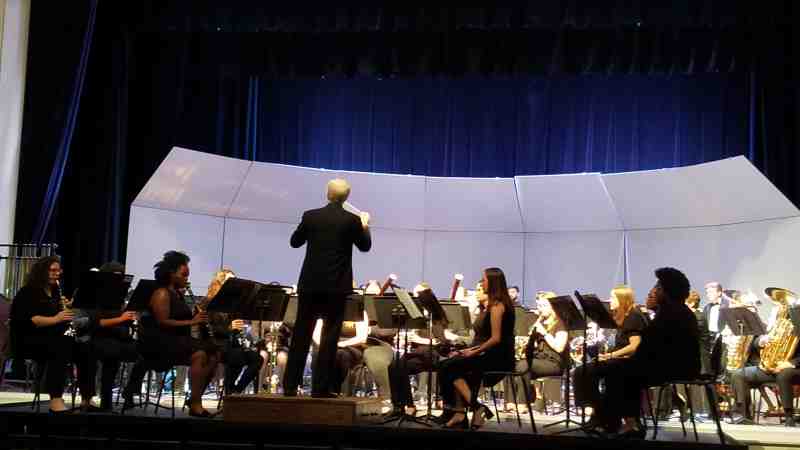 Symphonic Winds will set out to capture a different tone when Mississippi College’s student ensemble takes the stage for its Spring Concert – the band’s second on-campus performance of the semester – at 3 p.m. Sunday, April 24, in Swor Auditorium in Nelson Hall.

The event is free to the public. Seating will be available on a first-come basis.

Unlike its Winter Concert, when the musicians’ repertoire consisted of popular pieces by 20th-century composers, the 50-member band will play selections intended to evoke a distinctly American experience.

Dr. Craig Young, director of bands and professor of music in the Department of Music at MC, said the programming change was intentional.

“It’s different music for a different kind of purpose,” said Young, who is in his 23rd year directing Symphonic Winds. “For every performance, I try to select an overarching theme. This one is an American theme – I tried to pick out representative scenes of America.

“With all the things that have happened over the last two years, this is our response – not literally, but musically.”

The concert will also feature performances by MC’s Chamber Ensembles scattered throughout the Symphonic Winds selections.

Among the traditional melodies, a highlight of the evening will be the world premiere of “May You Live,” by Bryant Thaxton, a senior music major from Raymond. The Symphonic Winds tuba player wrote the piece especially for this concert.

“He composed it as a response to the pandemic,” Young said. “It is a very sectionalized piece where he completely changes feelings throughout it. This is his reaction to what happened to him during the pandemic.

“He never could tell what would happen next during that time, so every section of the piece is different from the last.”

Symphonic Winds will open the concert with a rendition of “American Salute” by Glenn Gould, a popular piece during World War II, that should grab the audience’s attention. The melody includes refrains from “When Johnny Comes Marching Home,” a Civil War-era tune so popular that people from other countries sometimes referred to American soldiers as “Johnnies.”

“Gould was a composer during World War II who wrote this for the Army band to perform for the troops,” Young said. “We’re in kind of a wartime feel with Ukraine, so we thought it would be appropriate to begin this performance.”

The second piece, “A Movement for Rosa” by Mark Camphouse, is a tribute to Rosa Parks, who helped initiate the civil rights movement in the U.S.

“It gives the feeling of her struggle and honors her civil rights work,” Young said.

Thaxton’s world premiere will follow. The Symphonic Winds performance will conclude with “Lincoln Portrait,” one of Aaron Copland’s most famous pieces. The stirring, classical work will be punctuated by moving narration from Dr. Cliff Fortenberry, professor in the Department of Communication at MC.

The first seven minutes of the piece is an orchestral transition that includes two themes: “Camptown Races” by Stephen Foster, and a lesser-remembered traditional American folk song, “On Springfield Mountain.”

During the second part, Fortenberry will dramatically recite words taken from Abraham Lincoln’s most important speeches, including the Gettysburg Address, the Lincoln-Douglas presidential debates, and a message to the U.S. Congress.

Young said the finale is a requisite for any tribute to the U.S.

“You can’t do an American concert without doing some Copland,” he said. “As Americans, the audience will easily relate to the music, no question about that.”

The Symphonic Winds performance will serve as an exclamation point to a semester-concluding, live music-filled weekend schedule at MC. On Friday, April 22, the Mississippi College Jazz Band is scheduled to play on the brick streets in Olde Towne Clinton, and on Saturday, April 23, MC’s Chamber Ensemble will perform a program outdoors at Lyons Club Park in Clinton.

“It will be a final weekend blowout for the music program,” Young said.