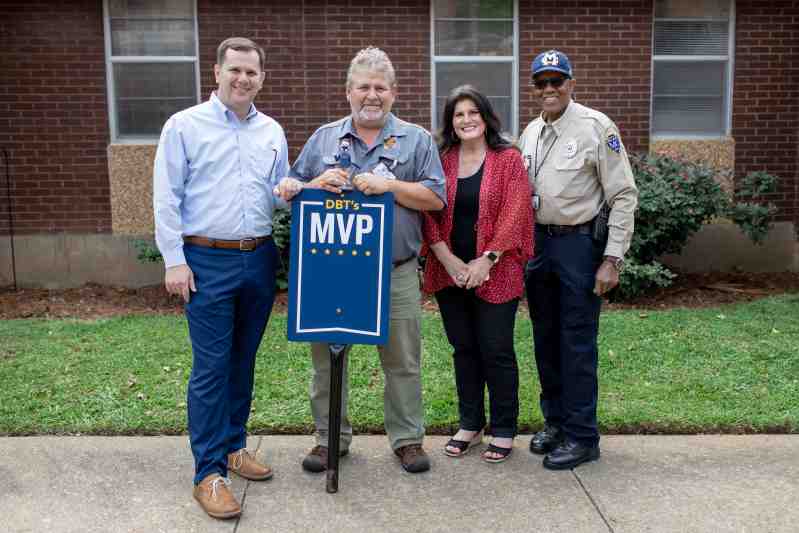 Shooting at clay targets and seeing them shatter on impact is a longtime popular sport across the USA.

When it comes to skeet shooting, few people do it better than Mississippi College employee Mike Boyd. After all, he’s captured 29 state championships and 200 open titles.

For his many successful performances over the past 36 years, the Clintonian was inducted into the Mississippi Skeet Shooting Hall of Fame. But he's also a big achiever in other ways, with Boyd selected the latest winner of the university’s MVP award. Mike was among the staff heroes going the extra mile on the Clinton campus after a potent February ice storm in Mississippi slammed MC.

In May, Mike Boyd became the third recipient of President Blake Thompson’s MVP award. A nice parking space on the Clinton campus is one of the perks that goes with it. A bobblehead of Dr. Thompson comes with the honor, too.

While Boyd’s favorite hobby is skeet shooting, Mike is just as passionate about the important job he’s doing at Mississippi College. Boyd first went to work at MC in 1994 as an air conditioning technician. Over the years, he’s moved up the ranks in the Physical Plant Department to be a supervisor in building operations and maintenance.

Mike Boyd prides himself on working hard to provide the best services possible for thousands of students in residence halls and academic buildings. Daily work caring for historic buildings like Provine Chapel as well as modern facilities comes with challenges, he says. But Boyd manages to overcome any problems and skillfully does it when duty calls.

“Mike is an exceptional employee who has dedicated a lot of time and energy into our physical plant,” says Tom Williams, executive director of campus operations. “He is on call 24/7 and has never failed to respond when called upon to address problems on our campus.”

During the rare February 2021 ice storm, his work was truly outstanding on the Clinton campus, administrators say.

Mike and colleagues stayed on campus for several nights when travel on icy roads was impossible. “They slept in their offices. They checked all equipment 24/7 to keep them from freezing up,” Williams said. “They cleaned hallways and rooms when pipes did burst and flooded the spaces. They placed salt on walks around the cafeteria. They scraped ice off of steps and walkways.”

MC administrator Jonathan Ambrose poured on the praise about this dedicated employee during the winter storm. “He chose to stay on campus, away from his family, ensuring the safety and warmth of our students in the residence halls,” Dr. Ambrose said. “Mike embodies the essence of Mississippi College, and it is people like Mike Boyd that make it a special place,” adds the associate vice president for the student experience and dean of students.

Mike’s love of skeet shooting is a hobby that never gets old. His sons, Nathan and Cameron, enjoy shooting with their Dad, a level one instructor. His wife, Judy, who works for New York Life Insurance as a service representative, serves as a manager for the Capitol Gun Club.

His family is well-connected to Mississippi College. Nathan has two degrees from MC – in accounting and from the MC Law School in Jackson. Cameron holds an MC degree in physics/electrical engineering. Mike’s daughter, Chelsea, holds two MC degrees in childhood development and education.

Mike Boyd, 60, grew up in East Lincoln, a rural community east of Brookhaven. He moved to the Pearl area in the late 1980s. Mike responded to a newspaper ad he spotted one Sunday to discover the job opening at Mississippi College. And it’s been a fun ride ever since.

When he’s not working or skeet shooting, the Mississippian finds time for other hobbies – from hunting to fishing and gardening.