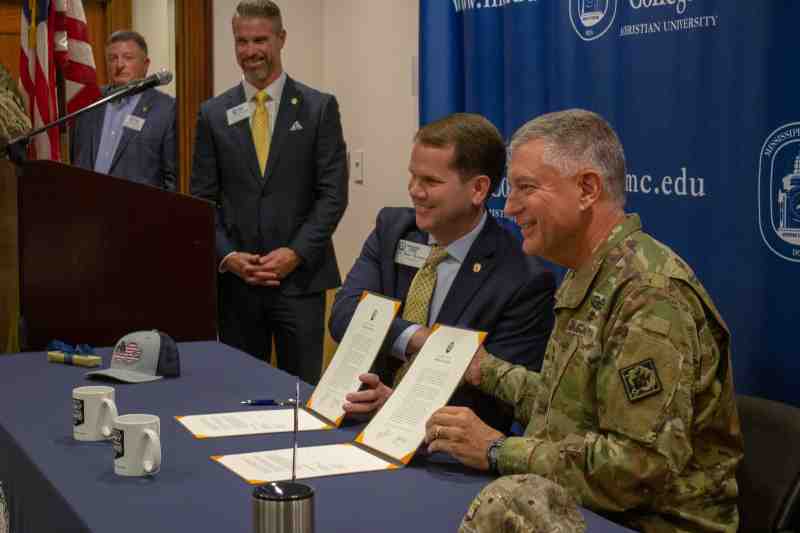 Mississippi College will serve as one of the host sites welcoming future soldiers for military drills.

Putting boots on the ground for weekend drills at the Christian university this Fall is well-timed. It comes as America honors the men and women who served in the nation’s military during Veterans Day activities on November 11.

Some of the initial drills staged at Mississippi College will occur on Saturday morning November 16. A few hours later, the young soldiers in training will be on hand as MC battles Delta State in a home football game.

Kicking off at 2 p.m., the MC versus Delta State contest pits two Gulf South Conference rivals at Robinson-Hale Stadium. At stake will be the 2019 Heritage Bowl trophy and bragging rights.

Football fans in the stands will notice a higher visibility for the future military leaders on the Clinton campus. The soldiers in uniform plan to watch the first half of the game and possibly march around the field during half-time.

The Reserve Officer Training Corps is offered at more than 1,700 colleges and universities nationwide. MC is one of the many institutions linked to the program. It prepares young adults to become officers in the U.S. armed forces. Army ROTC is one of the most demanding and successful programs in the nation. Courses take place in the classroom and in the field.

Rather than having weekend drills at the Raymond Road Armory in Hinds County, Mississippi College should be a more convenient location, especially for students.

SFC Richard Messer, who works in recruiting and retention for the Mississippi National Guard, doesn’t anticipate there will be huge numbers at the first few drills. There could be 30 to 40 students in attendance. That could include high school ROTC students from Brandon, Pearl, Richland, Florence and Madison.

In December, Messer expects there could be 80 to 100 students taking part in military drills at Mississippi College.

After Mississippi College reduced tuition for active members of the National Guard and other USA armed forces, Messer believes the new partnership will spur enrollment increases. In two years, there could be as many as 150 students enrolled in military training programs at Mississippi College.

MC senior Samantha Hernandez of Slidell, Louisiana is pleased to hear about the new partnership between the Baptist-affiliated university and the military. The Army leadership training she’s receiving at MC is proving beneficial. She plans to attend MC Law School.

President Thompson said Mississippi College is honored to support the military that has served America so well for more than 200 years.

MC becomes the first private university in the state to make this tuition reduction plan available to all branches of the armed forces.