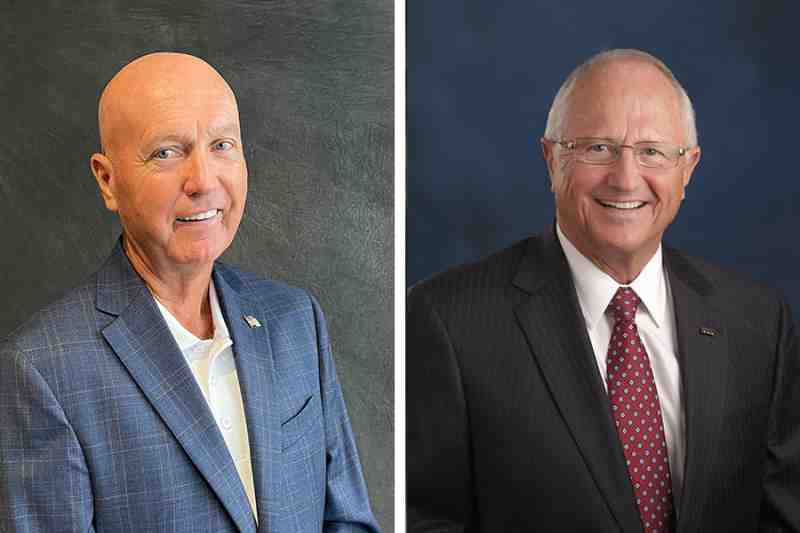 Business leaders Percy Thornton, left, CEO of Southern States Utility Trailers in Richland and H and P Trailer Leasing in Flowood, and Thomas Colbert, an executive with Community Bank for more than 50 years, are scheduled to receive the Award of Excellence at MC's Homecoming.

A pair of business visionaries who found success in Mississippi and shared their fortunes with the state’s oldest university have been selected to receive the Award of Excellence from Mississippi College.

Percy Thornton, CEO of Southern States Utility Trailers in Richland and CEO of H and P Trailer Leasing in Flowood, and Thomas Colbert, who has served in an executive leadership position with Community Bank for more than 50 years, are scheduled to receive the honor during the annual Homecoming Brunch from 11 a.m. to 12:30 p.m. Saturday, Oct. 30, in Anderson Hall on the second floor of the B.C. Rogers Student Center.

The award, presented by the National Alumni Association, honors men and women who have rendered distinguished service to Mississippi College. The honor is limited to those who, through a long period of years, have worked with marked intelligence and success to promote the highest interests of the University.

Dr. Jim Turcotte, executive director of alumni affairs at MC, said the award is unique in that it is presented to non-alumni who have nevertheless made a significant impact on Mississippi College and the community.

“These two individuals have both been very selfless and have been concerned about other people more than themselves,” Turcotte said. “We are blessed to have them connected to the college.”

Thornton is a member of the MC Board of Trustees. His daughter and son-in-law both graduated from Mississippi College.

He said his involvement with the Christian University began several years when Chad Phillips, associate director for alumni and parent engagement, introduced him to Dr. Marcelo Eduardo, dean of the MC School of Business, who asked him to speak at an Ethics Week presentation. Thornton became familiar with Dr. Lee Royce, former MC president, who invited him to sit on the Board of Trustees.

“I’ve gotten to know a lot of the people involved with Mississippi College, and it’s been a great experience,” Thornton said. “I got to know Dr. Blake Thompson (MC president) when he came in. He and the Board of Trustees do a good job, and it’s a pleasure to be a part of it and it’s also an honor that they would ask me to serve.”

Thornton has more than four decades of experience in the semi-trailer business. He began as a salesman for Nabors Trailers and, after four years, became a trailer sales manager for Rebel Truck Sales. He and two partners purchased the trailer division from Rebel Truck Sales and formed Southern States Utility.

Thornton said his support of Mississippi College through the years has been personally fulfilling.

“MC is a Christian institution, which makes it all worth it,” he said. “Being a Christian, I understand I’m not responsible for any of my success without the Lord. Giving Him credit for everything keeps me humble.”

A 1962 graduate of the University of Mississippi, Colbert attended the Senior Bank Management School at Harvard University and the School of Bank Public Relations and Marketing in Chicago. He became the state’s youngest bank CEO in 1968, which led him to found Mississippi’s first bank-holding company in 1977. He now serves as senior chairman of the board for Community Bancshares of Mississippi, Inc.

In 1990, Colbert and his wife, Ann, established the Christy Colbert Butler Memorial Scholarship Fund at MC in memory of their daughter. Scholarship recipients are selected from MC students or prospective students seeking a Christian vocation who reflect Christian character, leadership potential, strong motivation, and high academic standards. Thomas Colbert was also a supporter of the first Haley Rose Gunter Autism Conference at Mississippi College in 2018.

A 2005 inductee into the Mississippi Business Hall of Fame, Colbert has also received the National Community Service Award from the Daughters of the American Revolution and the Boy Scouts of America Silver Beaver Award.