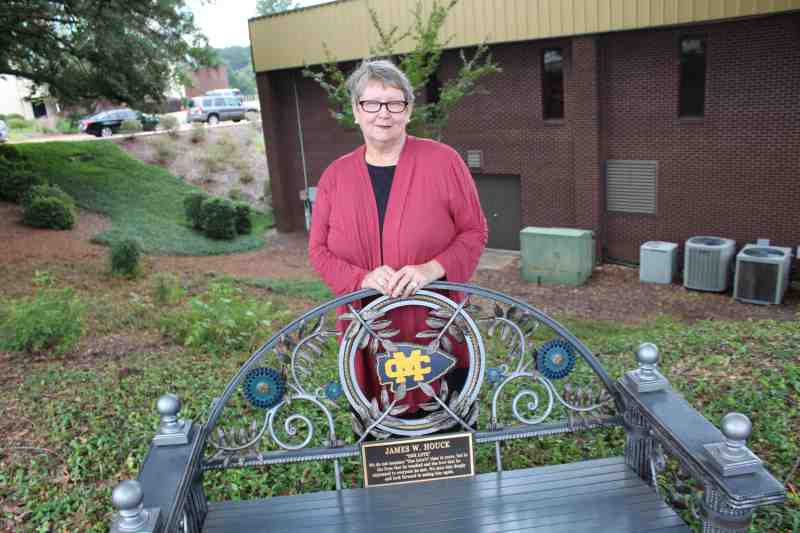 Linda Houck Willard of Georgia stand by the bench at Mississippi College that honors the memory of her son, James Houck.

James W. Houck cherished his days as a Mississippi College football player and his entire experience as a student-athlete.

A new bench unveiled near Robinson-Hale Stadium honors the memory of the late MC Choctaws defensive lineman who loved all things Blue & Gold. At age 45, Houck died during a March 2018 vacation trip in Alexandria, Virginia.

His mother, Linda Houck Willard, made the generous gift to Mississippi College athletics to create the memorial on the Clinton campus. The bench sits just yards away from the home of Choctaws football.

“Being the mother of James Houck was a gift from God, and it was an honor to be his Mom,” Linda Willard said.

Earlier this Fall, the Buckhead, Georgia resident visited Mississippi College as the bench was installed at the Christian university.

Her son was nicknamed “One Love” at Mississippi College by one of his classmates because of “the love he had on and off the field,’’ Linda Willard said. “His love was widespread and true.”

A walk-on who wore No. 74, James W. Houck never attracted media attention as a college football star. He was the humble guy who faithfully showed up at practices to make his teammates better. James was a leader on the scout squad that prepped Choctaws starters for upcoming games.

In 1997, when the Choctaws won the American Southwest Conference football championship with an 8-2 record, James Houck was voted the scout team’s MVP. His solid work ethic at practices didn’t just make his MC teammates improve on the field. He made them better people, too, friends say.

Athletic Director Mike Jones expressed his thanks to Linda Willard for her gift to honor her son’s legacy.

“The James W. Houck memorial bench is a beautiful addition to our campus and our athletics complex,” Jones said. “We are honored and thankful to receive such a thoughtful gift. His memory will live on through the bench. And it will be seen by so many people at Robinson-Hale Stadium for years to come.”

As a Stone Mountain High football player in Georgia, the Boone, N.C. native gave 100 percent to the team. During his playing days in the 1990s, the squad finished with a 9-1 record, one of the best seasons at the school in years.

High school friend James Robertson said one of his life’s blessings was to have known Houck for more than three decades. The former MC student built many friendships throughout his life, from the Peach State to the Clinton campus to people in Mississippi’s business community.

“James loved his time at Mississippi College and served the Choctaws well,” Robertson said. “I miss him every day, but I’m grateful for every minute I had with him.”

For more than a decade, colleagues at Hederman Brothers Printing in Madison admired him as a friend and skilled colleague. Houck joined the Mississippi-based company in 2005 and did excellent work as a production manager. From day one, James proved to be a valuable employee who helped teach, train and lead Hederman Brothers co-workers. He remained on call 24/7 and always worked hard. Away from the office, James Houck served as the founder and captain of the Hederman Brothers Dragons boat team from 2011 to 2017. The late husband of Randa King Houck also enjoyed hunting, fishing and music.

His mom, Linda Willard, may have said it best when speaking about her son. “I could go on forever about James and his outlook on life, family, and friendships. He was a wonderful husband, a great worker and not a stranger to anyone he met.”