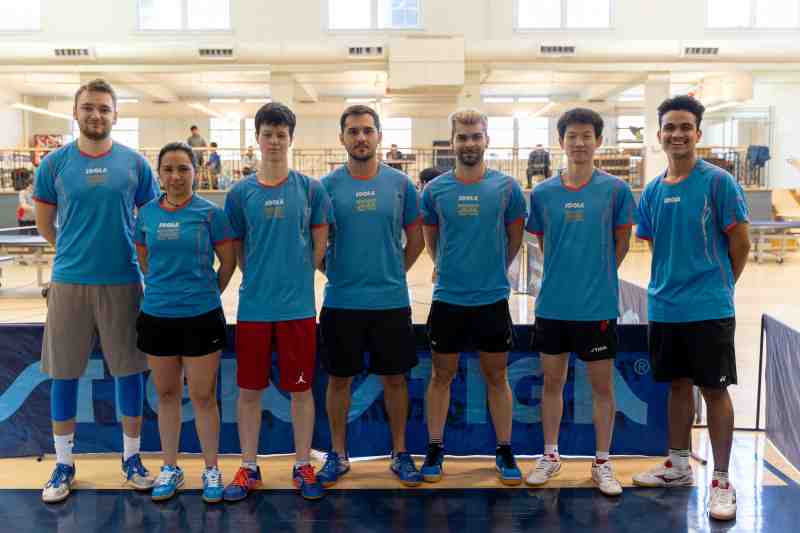 While the MC players hail from nations thousands of miles away from the Clinton campus, they are all on the same page when it comes to their favorite Olympic sport. All have a passion for table tennis.

The MC student-athletes played their “A” game with its coed team winning the 2020 Dixie Division tournament on February 8. The South Alabama Jaguars finished in 2nd place. Alabama-Huntsville got third and the Alabama Crimson Tide rounded out the field.

Mississippi College also breezed to victory during the Fall 2019 Dixie Division tournament staged during the university’s Homecoming in late October.

Last season, the MC Choctaws finished as the runner-up to perennial NCTTA coed team champ Texas Wesleyan University at the 2019 national championships in North Carolina. The two table tennis rivals will likely square off again in a battle at the South Regionals on the Fort Worth campus February 29-March 1.

The weather was perfect for the winter’s National Collegiate Table Tennis tournament at MC. Players didn’t seem distracted by all the noise on the floor below the tournament venue, Alumni Gym. Built in 1925, Alumni Hall is undergoing extensive renovations as the university opens its first Chick-fil-A restaurant and Einstein Bros. Bagels eatery by next Fall.

Despite all the loud construction noise loud all morning and afternoon that Saturday, players from the four college teams stayed focused with paddles in hand.

MC’s team features its first female player in more than a decade. She is Paola Casas, an MBA student from Mexico. Paola is also the university’s first table tennis player from Mexico.

Daniel Godoi, 17, a freshman studying electrical engineering, is one of MC’s two players from Brazil. Vlad Totkalo, a huge fan of the Toronto Raptors and the NBA, is MC’s first player from Ukraine. He’s back for a second season as an MC Choctaw.

Captain Harry Sharma of Japan helps the MC team succeed with his can-do approach to the Olympic sport. Johnson Liang, a Michigan-based accountant and a former MC table tennis star, is back for his third season as coach.

The Dixie tournament lasted a little longer than usual as players engaged in singles action to qualify for upcoming NCTTA tournaments.

Drew Ogden, the Dixie Division director from Huntsville, Alabama, had a busy Saturday keeping up with the marathon of games and statistics involving the four table tennis squads from two neighboring states.

“This year’s bunch from Mississippi College is amazing and it’s been that way for 13 seasons,” said Andy Kanengiser, the MC table tennis sponsor. “The student-athletes are ready to work hard in practices to return to the Regionals. We anticipate another strong run at the 2020 national championships in Round Rock, Texas.” The collegiate championships are set for April 3-5 near Austin.