MC Alert: MC operations on the Clinton campus and at MC Law in Jackson will close at 3:30 p.m. on Tuesday, Nov. 29, in anticipation of severe weather. All classes at both the main campus and the law school beginning after 3:30 p.m. are canceled. Please monitor local conditions and stay weather aware.
Posted Wednesday, September 5, 2018 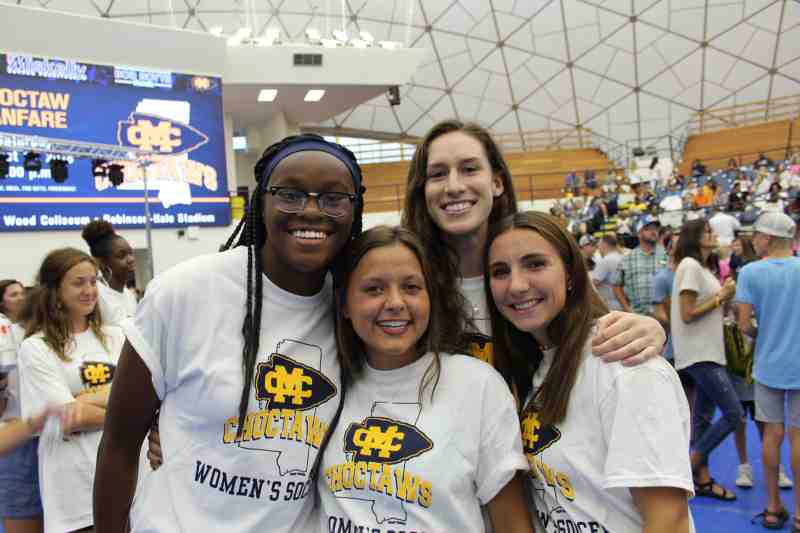 Mississippi College Lady Choctaws soccer players are part of the enrollment rise on the Clinton campus. The student-athletes are pictured at the 2018 Choctaw Fanfare to open the 2018-19 academic year in August.

Mississippi College’s Christian environment, solid academic programs and its location near home are all factors boosting MC enrollment this Fall.

That’s what university leaders and others are saying after school officials reported 5,138 MC students in classes as of August 30. That’s up from 5,061 MC students enrolled a year ago.

“Class size is smaller,” says freshman Wes Miller, 18, of Brandon. “It has the atmosphere of a big campus feel without big campus problems,” says the pre-med major. “Being close to home is nice.”

Early in MC’s 193rd academic year, sophomore Alee Paxton, 19, of Sunflower County discovered the right place to pursue her college degree. “I like the atmosphere,” said the Inverness resident during a break between classes on September 4. “It’s not huge.”

The 1.52 percent uptick of MC students from last Fall is detailed in new reports from the Office of the Registrar. Undergraduate enrollment grew to 3,248 students. Graduate student enrollment rose to 1,243 students. MC Law in Jackson enrolled 361 students.

“We did a good job retaining students,” Howard said. “We picked up in online enrollment for education, and in business graduate programs.”

“We are off to a good start, and expect out numbers to increase with the registration for the second Fall accelerated term on October.”

Mississippi College continues to attract strong ratings in national surveys. MC is rated No. 3 in the USA as a top Christian college by onlinechristiancolleges.com in a listing released in late August. The survey examined costs, academic quality, graduation rates and other key measuring sticks.

Becoming part of the Blue & Gold family was a terrific choice for students like sophomore Sydney Rester, 19, of Brandon. She felt right at home at Mississippi College after graduating from Hartfield Academy in Flowood. “Being at a Christian college definitely helps,” the social work major said Tuesday.

Her friend, Allee Paxton says the university’s excellent biology/pre-med program made Mississippi College an attractive choice for the Deltan. Each year, more than 100 MC graduates enroll in medical or dental schools.

Other noteworthy areas of study include Mississippi College’s physician assistant program. The 30-month program became the first in the state in 2011. It enrolls 88 students in modern facilities at the Baptist Healthplex on the Clinton campus. There were 87 graduate PA students enrolled a year ago.